Reform on the menu
Business

Reform on the menu

Food security is a matter of both quality and quantity, and achieving it means changing the behaviour of everyone, from farmers and consumers to governments and agribusiness.

Food security, experts say, exists when all people, at all times, have physical and economic access to sufficient, safe and nutritious food that meets their dietary needs and preferences for an active and healthy life.

In Southeast Asia, the number of undernourished people has continued its steady decline by about 50% over the past decade, as inclusive overall growth has resulted in benefits being spread more of the poor and vulnerable. Productivity gains in the agricultural sector have driven up the availability of food and significantly improved food access of the rural poor.

Despite the impressive progress, more than one person in nine worldwide still suffers from hunger, according to The State of Food Insecurity in the World 2015, published by the United Nations Food and Agriculture Organization (FAO). Consequently, work still needs to be done to address these challenges in Asean where most countries are leading suppliers of staple crops and foods to the world.

There are still 60.5 million people in Southeast Asia, or almost 10% of the population, who are undernourished, said Xuan Li, senior policy officer and Zero Hunger Challenge delivery manager at the FAO's regional office for Asia and the Pacific in Bangkok, citing figures of the UN agency in 2015.

Stunting of children remains a serious challenge, with high prevalence above 40% in many Asean countries. High rates of micronutrient deficiency are also observed in the region. The prevalence of anaemia, an iron deficiency, in most Asean countries is alarming, amounting to more than 40% for children under the age of five.

At the same time, over-nutrition is on the increase (around 15% of adults are overweight) because of changing dietary patterns, especially in urban areas, and also childhood obesity is going up, she added.

"Asean countries will see increasing urbanisation and rising middle-class incomes, which will have a huge impact on the region's future food consumption patterns."

Projections show that feeding a world population of 9 billion people in 2050 would require increasing overall food production by 60% from 2012. From the supply side, a worrying trend is seen in the slowing yield increases in cereal crops, particularly rice and wheat.

"These levels of yield increase are insufficient for meeting future food demand without resorting to agricultural land expansion," said Prof Li. "However, Asean's arable land makes up just 15.6% of its total land area and little space is available for expansion. In comparison, without an expansion of agricultural areas, farmers in Asean countries would need to achieve annual yield increase rates of more than 1.7% in order to feed the growing population.

"On top of this, some studies predict that Asia's production of irrigated wheat and rice will be 14% and 11% lower, respectively in 2050 than in 2000 due to climate change. Thus, how to bridge the food security gaps remains a huge challenge. It can hardly be achieved without a fundamental transformation of the current food and agricultural system."

Asean has established an Integrated Food Security Framework and Strategic Plan of Action on Food Security (SPA-FS) for 2015-20 to ensure long-term food security and nutrition, and to improve the livelihoods of farmers. The aim is to address multiple challenges and emerging threats in terms of an economic slowdown, rising cost of living and of agricultural inputs, climate change, urbanisation, agricultural land conversion, and migration of labour from rural areas.

Surmsuk Salakpetch, deputy director-general of Thailand's Department of Agriculture, said food security became a high priority in the aftermath of the 2007-08 food price crisis, when world prices of staples such as wheat, rice, corn and sugar soared because of demand for ethanol after oil prices surged above US$100 a barrel.

The Asean Summit in 2009 pledged to embrace food security as a permanent and high-priority policy. Along with the SPA-FS, the Asean Integrated Food Security Framework (AIFS) was adopted as a comprehensive framework to facilitate regional efforts and responses.

"The agriculture and food sector is a significant economic sector for the Asean region and also plays a key role in the fight against poverty and hunger," Dr Surmsuk told a regional forum co-hosted by the German Society for International Cooperation (GIZ) in Bangkok last month.

"Asean member states have recognised the need for an increase in food production and trade of agricultural products in the region by avoiding further deterioration of natural resources, to increase the incomes of framers and to generally improve the livelihood of people in rural areas."

"Hunger might not be the main challenge here but rather the quality, availability and use of safe and nutritious food," he told Asia Focus. 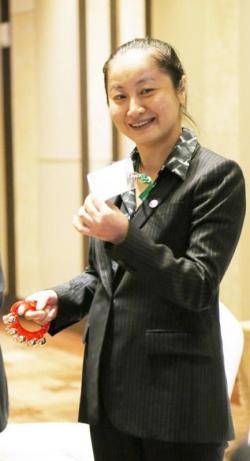 Some studies predict that Asia's production of irrigated wheat and rice will be 14% and 11% lower, respectively in 2050 than in 2000 due to climate change, says Xuan Li, senior policy officer with the FAO regional office for Asia and the Pacific. SUPPLIED

To address this, Asean member states have set national policies, but some gaps remain. For example, "some quite big nations" such as the Philippines and Indonesia are not yet "rice self-sufficient", said Dr Bickel.

"Rice is a very local good and citizens like their local rice. It would be desirable if more intra-Asean rice trade would happen. That in turn requires campaigning by national governments to make the above-mentioned issues and challenges more publicly known," he noted.

Some governments, he said, also find it challenging to reach a wider part of their farming population to make them adopt better farming practices.

"That is why they might consider partly shifting from 'public subsidy' programmes to 'public investment' programmes so that incentive systems for farmers could be better built."

To promote both improved nutrition and sustainable higher production, Asean needs to promote agricultural diversification, which requires an integrated approach combining both nutrition-sensitive and climate-resilient agriculture, she said.

For instance, out of the 7,000 crop species that are being used as food, less than 2% provide 90% of the energy in our current diets.

"Governments need to get away from the strong focus on staple crops only and tap the huge potential of alternative crops that are both nutrition-dense and climate-resilient as well as available locally. These alternative crops were often traditionally grown by local farmers, but received no incentives, which were mostly geared towards rice production," Prof Li said.

In Asean, many farmers have grown up knowing only input-intensive rice farming, and many consumers make dietary choices that are unhealthy or unsustainable, said Prof Li.

"Farmers and other stakeholders experiencing their livelihoods, health and incomes challenged by climate change and price turbulence, are certainly aware of it," she said.

Meanwhile, a growing number of people eat greater volumes than necessary and prefer foods that are high in sugar, salt and fat, partially due to lack of knowledge about what constitutes a healthy diet -- a trend that leads to various forms of malnutrition and high levels of food waste.

The current situation -- with high levels of malnutrition combined with low diversity in diets, limited production diversity and over-reliance on a few staple foods -- shows there is room for improvement in Asean.

"Rome was not built in a day, and building an enabling environment for sustainable food systems will take time, but Asean governments have begun to work on this transformation," said Prof Li.

At the national level, government authorities across various fields have started to work more closely together to review existing incentive schemes to determine how they support sustainable food systems.

Good initiatives, such as the local Safe Food Initiative launched in Thailand, should be further promoted, she said.

"Hunger might not be the main challenge here but rather the quality, availability and use of safe and nutritious food," says Matthias Bickel, project director for Asean Sustainable Agrifood Systems at GIZ Thailand. SUPPLIED

Sustainable agrifood is defined as a system that ensures long-term food security through the development of regionally coordinated policies and strategies for sustainable agriculture. This also includes promotion of cross-border value chains in concert with public decision-makers, agricultural enterprises as well as farmers and private associations.

According to the GIZ, agrifood systems are sustainable if they are profitable along the value chain, for farmers, processors, traders and input suppliers, providing safe, healthy and affordable food to meet ever-increasing demand, while at the same time guarding against shrinkage in natural resources.

"The model of sustainable agrifood systems is not yet widely known to most citizens with in Asean. This would require closer collaboration between the public and private sectors including civil society organisations," Dr Bickel pointed out.

Sathish Thampy, general manager of the Singapore-based global agribusiness group Olam, said sustainability should include lowering costs for people across the supply chain. Current challenges include inequality in farmers' incomes and huge inefficiencies.

With operations in 70 countries, Olam trades and operates in 47 different commodities, including cocoa, coffee, cotton, rubber and palm, sourcing from 4.3 million farmers. It also manages four million hectares of its own plantations and farms.

Mr Thampy said that to encourage more farmers to do sustainable farming, one must show them the benefits of being sustainable.

"Sustainable is a term and different people have different goals. If you tell farmer 'sustainable', he will not understand," he told Asia Focus.

"I think it's our role to explain 'sustainable' to farmers in a way that they understand," he said, giving the consistent availability of buyers as a good example. "On top of that, if they see improvement in their livelihood, their children and the next generation will come back and continue farming. For them, that's sustainable. This is what farmers want."

On the other hand, the company wants farmers not to overutilise water and chemicals.

"We work with farmers to improve their livelihood with, for example, better seeds, telling them this chemical should be avoided and which one should be used. Our overall objective of sustainability meets with that of the farmers. Then it becomes a holistic approach rather than just telling farmers to be sustainable, which they won't understand," said Mr Thampy.

Prof Li of the FAO said investment decisions in the private sector on sustainable food systems depend on a cost-benefit analysis.

"The private sector by definition is profit-driven. While sustainable production offers potential for the private sector to make profits, the overall choices will be contingent upon the associated enabling environment that creates incentives or distortions," she said.

Proactive and responsible leadership is thus required and government policy measures will determine private-sector choices, which will influence future development.

Policy incentives need to be developed to maximise the long-term benefits for society without comprising environmental sustainability or overly distorting the market, she said.

Promoting better collaboration between the public sector and farmers, farmers' associations, processors, transporters and collectors has the potential to bring mutual benefits for society through exchange of knowledge, continuous feedback and strengthened relationships, she added.