The suicide rate at the Mae La camp is more than three times that of the rest of Tak province and five times the average for all of Thailand. Photos Courtesy of the International Organization for Migration

A year ago, Gracia Fellmeth, a public health doctor studying for a PhD at the University of Oxford, was researching depression in women before and after childbirth in Mae La, the largest of the nine refugee camps along the Thailand-Myanmar border.

As part of her research, she asked a number of women whether they had ever had suicidal thoughts, or had attempted suicide in the past. It was an attempt to shed light on an issue that has not received widespread attention, but new revelations of a dramatic upturn in suicides are prompting calls for both understanding and action.

During her time in Mae La, recounted in a report for the British Medical Journal (BMJ), Dr Fellmeth recalls the tragedy of a paired suicide of a young, newly married, pregnant wife and husband in the camp.

The young woman was 18 years old and had described to Dr Fellmeth "episodes of depressed mood and occasional suicidal ideation", but had never previously attempted suicide. Like a growing number within the camp, her husband was "known to use alcohol and drugs".

Not long after the young woman spoke to Dr Fellmeth, she and her husband consumed herbicide, and were found lying together in bed, struggling to breathe and frothing at the mouth. "They were driven to the camp medical clinic, but were pronounced dead on arrival," notes the report.

Exactly what could have caused the suicide of the young couple, and many young refugees in Mae La like them? Dr Fellmeth wrote of the underlying factors plaguing the couple: "Feelings of hopelessness, despair and uncertainty over the future, exacerbated by family conflict, substance abuse and long-term financial insecurity, may have become unbearable for this newlywed, recently pregnant couple at a time in their lives which should have been full of hope and opportunity."

Paired attempts are very rare, but the rising numbers of suicides in Mae La over the last two years has quickly become alarming.

Mae La, established in 1984 in Tak province, is home to about 50,000 refugees, mainly of Karen ethnicity, fleeing religious and ethnic violence in Myanmar. Despite the election of a civilian government led by Aung San Suu Kyi, the road to peace in Myanmar remains a long and difficult one. The Thai and Myanmar governments have expressed hope that as conditions improve in Myanmar, more people can be repatriated from the camps, but emptying them could take years or even decades.

A recent report by the International Organization for Migration (IOM) illustrated the worsening suicide situation in Mae La. In 2014, successful suicides in the camp worked out to 2.31 for every 100,000 people. Last year the ratio jumped to 36.63 per 100,000 people. That compares with just under 11 per 100,000 people in Tak province and a rate of 6.5 in Thailand as a whole, according to figures from the Public Health Ministry.

Such is the sensitivity and complexity of the issue that only recently have in-depth studies taken place to try and document the rise of, and reasons behind, suicides in refugee camps, starting with Mae La.

"It is a longstanding issue and something we know very little about," admits Dana Graber Ladek, chief of mission at IOM Thailand.

The IOM report not only details the suicide rates within the camp, but also seeks to attempt to explain how, and why. Researchers conducted "postmortem interviews", discussions with the family members of someone who has committed or attempted suicide, said Guglielmo Schinina, head of mental health at the IOM. As well, interviews with people who had attempted suicide were used to understand what were the factors, who is most at risk, and how to respond.

It quickly becomes apparent that one common motivation behind the increasing suicides in Mae La doesn't exist. Rather, as IOM psychiatrist Pramod Mohan Shyangwa explains, "distant and proximal factors" -- an underlying cause and then a sudden trigger -- are commonly seen.

It is the underlying long-term themes that set the foundations for further triggers to result in the tragedy of suicide. Sally Thompson, executive director at The Border Consortium (TBC), explains that past traumatic experiences contribute to the underlying causes for suicide. "Every household has witnessed some traumatic events. There are a lot of stories that have been pushed deep down." 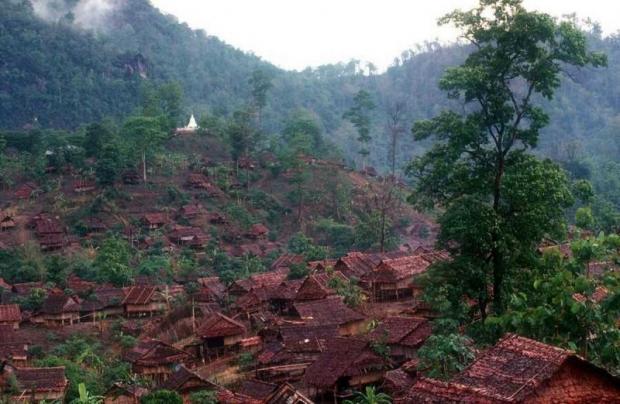 The Mae La camp in Tak province, established in 1984, is home to about 50,000 refugees. International Organization for Migration

Ms Thompson recalled interviewing one woman who said that as a child she witnessed her uncle being thrown off a cliff by the Myanmar army, while her other uncle was arrested and killed in detention. Her husband died of injuries sustained while on the front line and her eldest son was killed by a property developer when he returned home to find land. "She carries that very deep," said Ms Thompson.

The loss of hope exhibited by many refugees in the camp in response to the worsening external situation also contributes to the dramatic increase in suicides. "Hope is very important for life and if there is no hope, there is no enthusiasm for life," said Dr Shyangwa.

Leena Zieger, the co-founder of Burma Link, says new factors are also emerging. "There is an increasing pressure on refugees to return, but the conditions are not there to go back in safety," she told Asia Focus.

A decline in support for the refugees in general has further eroded hope within the camp, she added. "Food ration reductions have been happening constantly since 2012 but also in all kinds of services. Education and health services have been cut down significantly."

The loss of ownership and uncertainty about the future has also contributed to the worsening underlying mood for many of the refugees in Mae La.

"It was definitely a big factor, it came up a lot in the discussions with the refugees," Dr Fellmeth said. "Not knowing what the future holds. The issues surrounding the refugees are unclear. Some say, 'I just don't know what is happening, not next year or in five years' time.' They have no choice over what is going happen. They find themselves in a state of limbo."

What both the IOM report and Dr Fellmeth's research finds is the importance of understanding the impulsive "triggers" which, on top of the underlying factors, have contributed to the rise of suicides within Mae La.

A rise in alcoholism and substance abuse, which can be attributed also to Mae La's close proximity to Mae Sot, can be understood as an important trigger.

"Substance abuse is a constant element within the suicidal population in Mae La," said Dr Schinina. A large number of individuals in Mae La have turned to easily available drugs and alcohol, which can lead to the proximal factors that cause suicides.

Dr Fellmeth also believes many turn to alcohol and drugs as a support mechanism. "Easy access to drugs and alcohol, easy access to the means of suicide such as toxic herbicides has meant there are a lot of successful attempts."

Family conflict is also significant, says Harry Smith, lead coordinator of the IOM report. "Family conflict was an important factor. Almost half of those who complete suicide had experienced some form of family conflict leading up to it."

For many, he said, "family makes life worth living", and when this can appear to break down, it can prove to be the trigger cause.

"A strong theme of shame is involved in suicide," said Dr Fellmeth, who elaborated in her report for the BMC Pregnancy and Childbirth Journal.

"One girl I knew killed herself because she had lost some expensive jewellery and felt ashamed when her family was angry with her," she quoted one unnamed refugee as saying.

Dr Fellmeth told Asia Focus of a similar case. A father had borrowed some money he could not repay. "The father heard that the man he owed money to was on his way to his house to collect the money," she recalls. The father did not have the money and, fearful of bringing shame on the family, suddenly hanged himself.

The rise in suicides at Mae La is as saddening as it is complex. The IOM report goes far in explaining the underlying reasons for the spike since 2014, but much more can be learned. 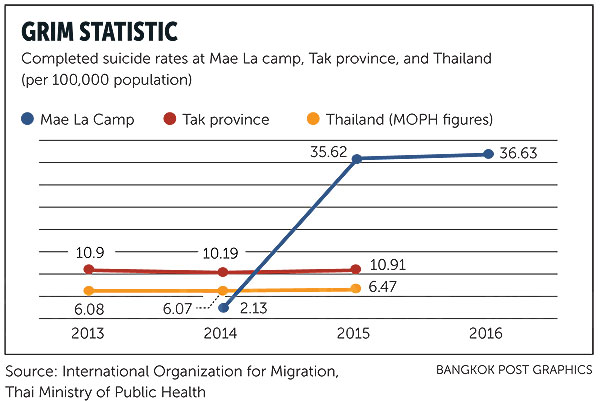