Jim Thompson, one of the largest luxury brands in Thailand by revenue, will open its first flagship store in Siam Paragon tomorrow as an early step in the fashion house's five-year global expansion plan.

The plan was presented to The Thai Silk Co's board by Gerald Mazzalovo, the group's first chief executive, who has been on the lookout for new locations and partners since he climbed to the top spot two years ago.

Mr Mazzalovo brings a wealth of insider insight, having served as chief executive of Bally, Clergerie and Loewe, and as group president of Salvatore Ferragamo.

The Paragon store is located next to Bombyx (one of Jim Thompson's five restaurants), and integrates touchscreens that give customers access to the catalogue as well as animated representations of the company's designs.

The store's digital innovations let consumers integrate the convenience of an online market, while enabling customers to feel fabrics and assess products in person.

These new adaptations also represent the brand's commitment to going digital. Two years ago the brand did not have a webpage, or sell products online. Soon the firm will open its first online store ever in Thailand, and will continue setting up online stores abroad as soon as physical retail locations are established.

The Thai Silk Co already exhibits its Jim Thompson, No.9, Fox Linton and Studio B home furnishing products in Atlanta, London, Paris, Munich and Madrid, but as of now it only operates clothing and personal goods locations in Bangkok, Singapore and Malaysia.

Mr Mazzalovo said Bangkok was an obvious choice for the first flagship store, given that the brand's history and identity are so closely connected to the Thai capital.

Within the next five years the company will set up flagship locations similar to the Bangkok store in London, Paris, New York, Singapore, Hong Kong and Shanghai -- in that order, according to Mr Mazzalovo. 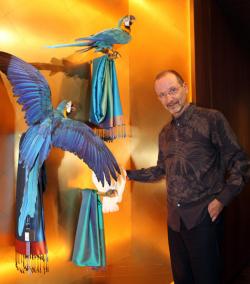 The company will expand to Europe first, Mr Mazzalovo said, in order to build its reputation as a global brand before moving into the Chinese market. China is one of the most profitable opportunities for the brand, but "the Chinese market is much more likely to welcome the brand when it has established a name in Europe, rather than only in Southeast Asia", he said.

Mr Mazzalovo, who is also the author of the most authoritative books on luxury brand management, said the company has all the makings of an international fashion house.

"We have the ambition of going global because we have a lot of the prerequisites needed, including over 70 years of heritage, know-how and historical anecdotes," he said.

The company's values of authenticity and mystery are still firmly anchored in Jim Thompson, the larger-than-life founder. Thompson, a Princeton and University of Pennsylvania graduate, came to Thailand in 1946 after a tour through Southeast Asia as an Office of Strategic Services (a wartime intelligence agency of the US during World War II) operative. He disappeared mysteriously in Malaysia in 1967.

For Thai investments, Jim Thompson opened a fabric showroom earlier this year and will open a high-end contemporary restaurant before the end of the year.

Asked how the firm would finance its rapid expansion, Mr Mazzalovo said the firm is highly profitable and its margins fare well when compared with those of close competitors.

Mr Mazzalovo said Jim Thompson competes against brands like Gucci, Louis Vuitton, Ferragamo, Prada and Chanel, but he considers the company to be closest to Hermes in terms of product and brand management.

According to Mr Mazzalovo, the firm can meet or surpass competitors' quality for prices that are 20-30% lower. He said the brand's second-largest competitive advantage is its identity.

Mr Mazzalovo said Jim Thompson is not a lifestyle brand, unlike some of its competitors -- it does not promote a particular way of life. "Our broad mission is to promote Thai and Southeast Asian culture, which integrates an innumerable number of lifestyles, from street sellers to people living in penthouses along the river," he said.

"Southeast Asian culture is very interesting to develop in, and has a very unique offering in the business. In terms of aesthetics, for example, Jim Thompson borrowed from Buddhism, which integrates a profusion of geometric lines with organic lines. We go beyond the forms of expression of the Western world."

The brand's identity as a Southeast Asian brand could be one of its strongest selling points in international markets. "There are a lot of French and Italian fashion brands, but how many Thai fashion brands do you know that are on that level?" Mr Mazzalovo said.

He and the rest of his creative team are bringing in talent from around the world to complement Thai design and workmanship. "In my first year, I recruited 15 designers and subdesigners from Korea, Italy, France, Finland and Thailand," Mr Mazzalovo said.

The company employs 3,000 this year and operates close to 40 boutiques around Thailand.