Northeastern village looking to breathe life back into historic craft.

A pottery shop at Dan Kwian displays its products.

Dan Kwian, a village in Chok Chai district 15 kilometres southeast of Nakhon Ratchasima city, has been famous for pottery and handicrafts for centuries.

National Highway No.224 runs through the village, and both sides of the road are packed with beautiful ceramic shops.

During their stops, the travellers and merchants would buy earthenware pots, jars, table wares and other goods from the folks who lived at the checkpoint. They learned pottery production from the Kha tribe, who travelled for work constructing Buddhist temples.

The merchants took many of the earthenware products to their own domiciles. And with unique and special characteristics of Dan Kwian products both in shapes and colours and durability, popularity of the craft has endured.

Nonetheless, Dan Kwian Municipality Pottery office chief Narong Pliewkratoke said the greatest development for local pottery production came in 1967, when technology was introduced to the pottery process with help from a group of academics from a college in Nakhon Ratchasima, upgrading the quality of pottery.

Today, Dan Kwian products are one of the major goods from Nakhon Ratchasima, and the government will pursue geographical identification (GI) registration for the product next year.

A GI is a distinctive certificate used to identify a product as originating in the territory of a particular country, region or locality where its quality, reputation or other characteristics are linked to its place of origin to reflects the unique characteristics and quality of products, which in turn boosts market value.

The internationally-recognised GI system also protects a product by certifying it comes from a certain area and has characteristics that cannot be replicated elsewhere.

The aim is to keep competitors from using the area's name or misleading the public about a product's origin.

Champagne, named after the region in France where sparkling wine is made, is the most famous example of a GI-protected product.

According to Mr Narong, Dan Kwian earthenware and the village, which were chosen as One Tambon One Product (Otop) and Otop tourism villages in 2004, have flourished between 2005-2006, registering 350 entrepreneurs.

However, the business later stagnated in 2012 as local entrepreneurs had competed against one another, cutting prices and copying designs.

About 270 entrepreneurs are still afloat, with four or five of them capable of producing premium quality earthenware for export to Malaysia, Singapore and Europe.

Data on export volumes and values are not available.

Commerce Minister Apiradi Tantraporn, who visited Dan Kwian on Aug 20 to meet entrepreneurs and related state agencies in the province, said the ministry aims to file for GI certifications for Dan Kwian earthenware among other indigenous products next year, with an aim to raise local income.

She said Dan Kwian's pottery has unique qualities that can generate more income to the province, as Dan Kwian products differ from those produced in other areas because clay in the area is rich in iron and bronze, which makes the earthenware strong and durable after being baked at high temperatures.

According to Ms Apiradi, she has already assigned the Intellectual Property Development to give the Dan Kwian community a hand to register GI and apply a quality control system next year.

The Business Development Department has also been assigned to help the community upgrade management, accounting and warehouses and apply more online marketing both domestically and abroad, while the Gem and Jewelry Institute of Thailand has been tasked with helping Dan Kwian community upgrade their handicraft and ornamental products.

At the global level, six Thai products won GI certification from the European Union and Vietnam.

Hom mali, the fragrant rice grown in Surin, Maha Sarakham, Buri Ram, Si Sa Ket, Roi Et and Yasothon provinces, Doi Chang and Doi Tung, two well-known coffee varieties made from beans cultivated in the hills of Chiang Rai, and Sangyod, a strain of rice from Phatthalung province have all won GI certification from the EU, while Isan traditional silk and Lamphun Thai Silk were awarded GI certification from Vietnam. 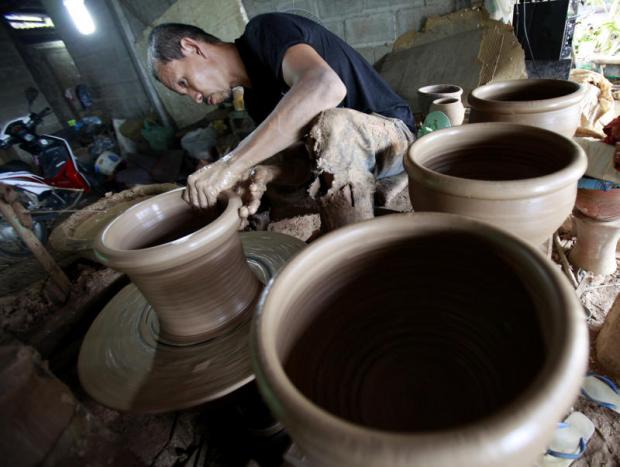 A potter at work in Dan Kwian, which has been famous for ceramic products and handicrafts for centuries. photos by THANARAK KHUNTON