Security, instability and quality are among the many-tiered obstacles the industry is facing

A tour group visits Pak Khlong Talat area. Improving safety and security is one of the tactics experts have prescribed to draw more visitors to Thailand. CHANAT KATANYU

Thailand is a top tourist destination on the global map, hosting some 32.7 million visitors in 2016 and expecting 40 million over the next few years, but the huge arrival numbers bring not only revenue but also headaches as the country struggles to promote sustainable growth.

Tourism analysts have expressed concerns that the country is not capable of handling the growth. Issues plaguing the industry include cheap packages or zero-dollar tours from China, tourist safety and security, and domestic instability. All these negative factors could impede the government's plans to make Thailand a quality leisure destination.

Thai Hotels Association (THA) president Supawan Tanomkieatipume says if the government wants to make the country a quality destination, tourist safety and security must be paramount, from their first steps into the country until they leave.

Japan, for instance, is one of the safest countries for tourists and Thailand should follow its lead, she says.

"The government should tighten up safety and show foreigners that Thailand is secure, by refusing to tolerate criminal activity," Ms Supawan says.

This includes addressing zero-dollar tours from mainland China and cracking down on illegal hotel and tour operators as well as tourist guides, mafia gangs and taxi drivers who break the law and run tourist scams.

In the Andaman Sea and the western coast the Chinese also topped accident and death tolls, followed by the French, Russian, German and British, respectively. 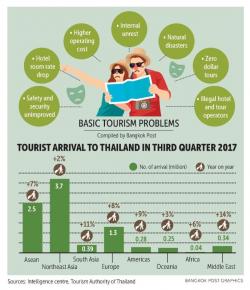 Bangkok is also far removed from other big cities in the region in attracting an influx of young travellers.

Despite all this, Mr Priesnitz says the hotel business is suffering from an internal crisis, and has done so for several years. For instance, average room rates at hotels in Bangkok have fallen 5% compared with rates 10 years ago. He says room rates would have increased 20% over the past decade if not for civil unrests and internal problems.

THA data shows that the average room rate for four-star hotels in Bangkok and Pattaya this month is 2,000-3,000 baht a night, while the five-star segment charges around 5,000 baht a night, on average half or a third the rates charged in Singapore.

The THA expects occupancy rate of 60-70% this year for the whole country, 5% up from 2016, with Chiang Mai hitting 70-80% and Phuket 85%, thanks to the influx of Chinese travellers. The occupancy rates in Bangkok and Pattaya are likely to remain unchanged from last year's 60-70%.

"Thai tourism has continued to grow but but hotel operators are not really thriving given the low room rates and reduced income," Ms Supawan says.

The index indicates that Thai tourism industry will continue to be strong this year and in 2018 due to the economic rebound in Japan, the US and Europe as well as rising employment in many countries.

So far the TCT is confident that Thailand will see 35 million arrivals this year, as planned. For the last quarter this year, 9.5 million foreigners are expected to travel to Thailand. But the council is not so upbeat about the domestic market, mainly because of the low sentiment over the late King's funeral.

"Domestic tourism is likely to dip in the last quarter," says Mr Ittirit. "The tourism index shows that domestic tourism will drop 20% from October to December compared with the same period last year. Only 25% of locals plan to travel during the period despite the high season."

Chooleng Goh, complex general manager in charge of Plaza Athenee and Le Meridien in Bangkok, says the hotel business will rebound in the normal peak period, the last two months of the year, with foreign tourists coming for the festive season and locals visiting their families.

Judging from advanced bookings, the average occupancy rate at hotels in Ratchaprasong and Phloenchit areas have already climbed by 4% in the first eight months this year to 80%.

Hotels in Bangkok in the final quarter this year expect to see revenue growing 10-12% year-on-year because of the holiday season.

Foreign tourists come to Thailand for its street food, top wellness and holistic services, conferences and exhibitions, and to experience local culture and traditions.

The number of inbound arrivals for the third quarter this year showed increases from all regions of 2-14% on year, led by the Middle East, South Asia, the Americas, Europe and Asean, respectively.

In 2016, Thailand was one of the most popular tourist destinations globally, ranking 9th in terms of arrivals with 32.7 million and third for tourism income, after the US and Spain.

From 2001 to 2016, international tourists to Thailand tripled from 10 million to 32.7 million while tourism receipts climbed from 600 billion baht to 2.5 trillion baht. Tourism contribution to GDP also doubled to 20% and its workforce up from 1 million to 4.5 million.

The World Tourism Organization has predicted tourist that arrivals to Thailand could reach 40 million in 2020, with an average annual growth of 6.5%.