Global haute fashion veteran Gerald Mazzalovo has taken the helm of the country's premier silk brand to show that the zenith of luxury is on hand in Thailand.

Jim Thompson is a bit of a national champion, and everyone had been waiting for us to wake up and come to a more contemporary level, says Mr Mazzalovo.

'Don't write about me," he says. "I don't have a model life. I don't think it is worth writing about something that's somehow banal: I just have a good life, a good wife and an independent head."

His voice moves in a cadence marked by the remnants of his French accent, which seems to squeeze the later half of most every word.

"Ferragamo, Gucci, Louis Vuitton," his raspy voice hurries to finish off, "we are on the same level of luxury."

The man, invariably framed in dark suit, dark shirt, and abundant scruff, is Gerald Mazzalovo. As for the brands he rattled off, they are among those he presided over before taking the top position at Jim Thompson, the luxury Thai silk company, last year.

Mr Mazzalovo made a name for himself as an avid supporter of heritage-based brand equity, and pushed firms like Loewe to the international sphere by emphasising their historic and symbolic value.

A Frenchman by birth and Italian by blood, he started his career as a professor in Phnom Penh in 1971. Four years later, he collected an MBA from Columbia, and made the move to management consulting. 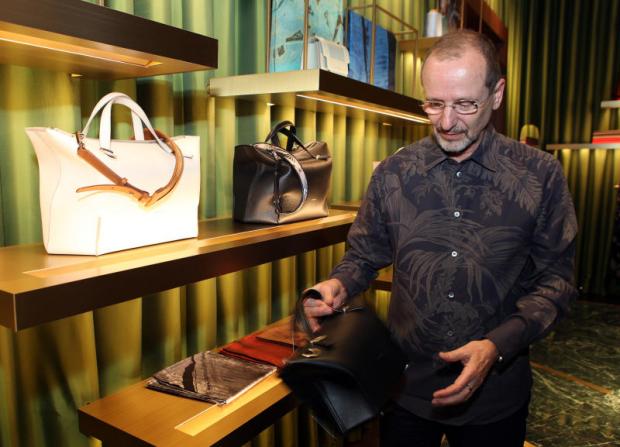 His transition to the fashion world was, by all accounts, a mere coincidence.

"I moved from Asia and started working in Milan under what became Accenture [a consultancy company], and one of the partners there was married to a Ferragamo daughter," says Mr Mazzalovo.

After a stint in Milan he started looking for exit options, and asked the partner to arrange meetings with possible employers.

"The person in the meeting happened to be Ferruccio [Ferragamo]," says Mr Mazzalovo. "He was looking for a number two, we liked each other and started working together in '89. That was my entry into the branding business."

After Ferragamo, Mr Mazzalovo was picked up by LVMH, where he took the presidency of Loewe. Bally and Clergerie followed, along with professorships at the Instituto d' Empresa (Madrid), and the University Paris Dauphine, where he taught luxury brand management and became known as an avid supporter of the role of brands in society.

His book, Pro Logo, published in 2004, was an impassioned response to Naomi Klein, who wrote as part of her famous polemic that brands, among other things, fed off the alienation at the heart of race relations by fetishising black style and white wealth. 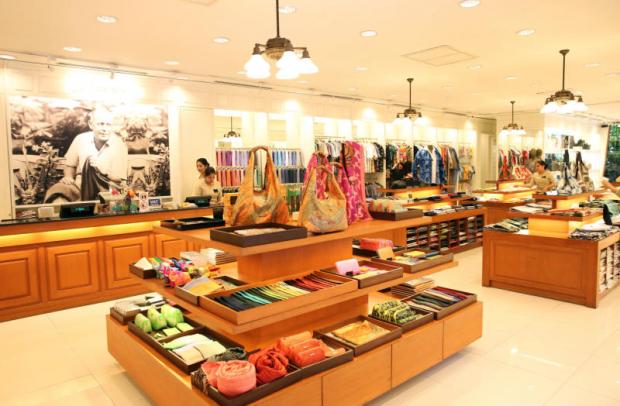 The idea surrounding the evil potential of brands "is an ideologised attitude, heir to a communist ideology under which there is the demonisation of commerce and anti-liberal activism," said Mr Mazzalo in a 2005 interview with the Spanish language newspaper La Vanguardia.

Brands can be a driver of progress if used correctly. Civilisation invented brands in an attempt to give object's identity; there are vases that are thousands of years old that have brands, he says.

Mr Mazzalovo's academic background has guided his understanding of fashion, especially his PhD dissertation Brand Aesthetics, which emphasises the importance of aesthetic aspects in commercial brands.

"This is how I understand fashion," he says as he brandishes the 200-page incarnadine booklet -- a collection of numbered geometric figures superimposed on black and white images and conceptual maps surrounded by blocky text. 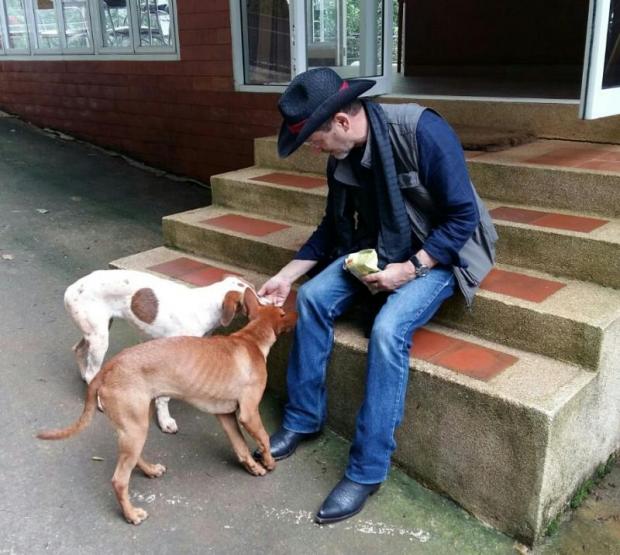 Mr Mazzalovo relaxes with his dogs.

Bombyx, the restaurant in which he holds many of his media meetings, is perhaps a reflection of his extreme concern for aesthetics. The dark space, flanked by abstract paintings and brown fabric ribbons hanging from the ceiling, creates the impression of an underwater cave.

Mr Mazzalovo says he is not sure why Jim Thompson hired him at 69 years of age.

"I don't know what the logic was. But Bill Booth [the managing director] knew the group had to reach another level. Jim Thompson used to have a monopoly, now all the brands in the world are here. He has a willingness to go abroad, to bring competition into their territory," he says.

While Mr Mazzalovo may ignore the reason behind the hiring decision, he has more or less built a reputation as an executive able to tap into the history and lore of firms to market them on a global scale.

''Brands can be revitalised by tapping into their history, their founders, iconic clients and historic personalities, as well as by objects that legitimise the authenticity of brand heritage," he says.

This is not the first time that Mr Mazzalovo has been asked to turn around a flagging historical brand. He was poached by French fashion mogul Bernard Arnault from Ferragamo "to make Loewe into a world-class brand competing with brands like Ferragamo, Chanel and Gucci".

In the process he transformed the brand to give it a more contemporary feel while still evoking its Spanish heritage.

"We reinforced the Spanish aspect, but with subtlety -- without pasting bulls into every design," Mr Mazzalovo said in a 1997 interview.

Jim Thompson, founded in the 1950s by the eponymous larger-than-life American businessman who later disappeared without a trace in the Malaysian jungle, may fall squarely into his area of expertise.

Like Loewe, Jim Thompson is seeking to put the brand on the same playing field as top notch European Fashion houses. 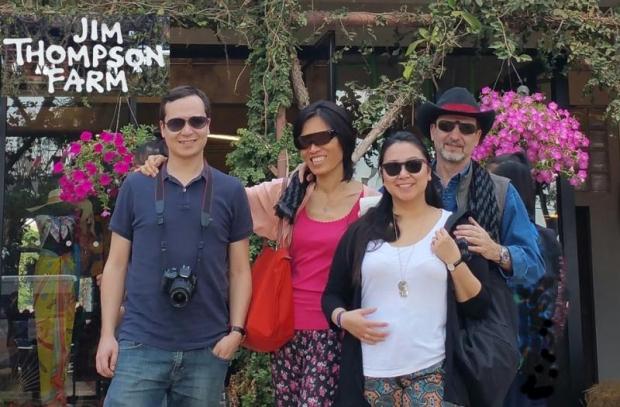 Mr Mazzalovo is seen with his family at Jim Thomson Farm.

"Jim Thompson is a bit of a national champion, and everyone had been waiting for us to wake up and have ambitions and come to a more contemporary level," he says.

While Mr Mazzalovo has given the media a snapshot into his timeline to open stores and restaurants abroad (London, Paris, Hong Kong and Shanghai), he has declined to disclose the specifics on how he will take the brand to the next level.

"It's on the five-year plan," he says repeatedly, "it will be revealed in time."

The business roadmap seems to play an almost sacred role in the company's culture.

"We can have discussions on small operating details but the plan remains the map," says Mr Mazzalovo. "A plan serves the purpose of making decisions."

The part of the plan that he does share, however, seems to indicate that there is an increasing emphasis on meaning, which may be essential to market the brand's deep Thai heritage. Like he did at Loewe, Mr Mazzalovo will try to integrate elements that root the brand in the region.

The latest advertising campaign, for example, heavily features tigers roaming on Bangkok rooftops or shying away from the kiss of a woman with vibrant yellow eyeshadow.

"When we put a tiger in our campaign it has a lot of meaning to us. It is the god of the jungle and very much part of the culture of the region," he says.

European brands using tigers as part of their publicity campaigns do not have legitimacy or authenticity, says Mr Mazzalovo. 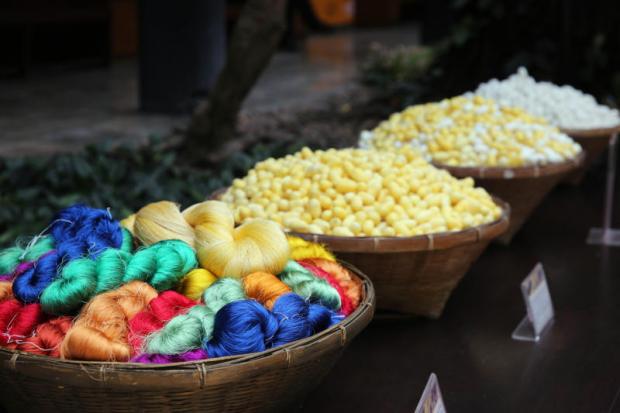 Raw materials for silk are displayed at the shop.

"Look at all of these Western brands using Chinese-inspired elements like the tiger. It's like seeing a tiger in a circus -- a commercial gimmick," he says.

Rather than focusing on pricing, the brand will focus on building its narrative of exceptionality. The brand does not necessarily segregate based on purchasing power, but on who can appreciate the meaning of a product and how it feels. Jim Thompson products are 30% cheaper than those of Gucci and Prada, he says, partly because of lower production costs.

For the brand, he has chosen the path of authenticity and meaning.

"I'm not going to be the one that cuts the brand from the root and says we will do whatever we think the market is going to like. We have a responsibility to carry on the brand," says Mr Mazzalovo, raising his voice 10 decibels.

He has been working in the fashion industry for a long time, and will remain so in years to come. In other industries everything is ruled by logic, but in fashion there is mystery, he says.

Anyone acquainted with Mr Mazzalovo's work will discern a deep concern for logic. He was attracted to the fashion industry for its complexity, a complexity which, even in 20-plus years of study, he has failed to understand completely.

A very logical person trying to understand something that may not be all logical. "I think that is a nice synthesis -- to rationalise the non-rationalisable," he says.

The executive says his position leaves little time for anything else, and he has stopped painting and writing for the time being.

"I don't live in luxury, I live in a hotel residence, I am a soldier monk," Mr Mazzalovo says. "A married monk."

"Anyway, talking about me doesn't interest anyone and is not going to sell one more handbag," he says while balancing a cup of red wine.

Parliament has voted for a party-list MP calculation method, which observers say could give small political parties a better chance to have their list MPs in the House.

Tourism operators in Koh Phangan are urging a lower ferry fare to the island after the price rose more than 40% this month, affecting operating and living costs for locals.