Rise of the mixed-use trend
Business

Rise of the mixed-use trend

Multifunctional retail and property developments, already popular in many other countries, are starting to catch on in Thailand

The proliferation of online shopping, varying demand from consumers and sporadic entry of new retail complexes has narrowed the catchment area. These factors are driving major retail developers both, old and new players, to jump on the mixed-use development bandwagon.

Consumers are seeing increasing numbers of retail complexes with more features, including restaurants and shopping on the ground floor, parking on the second and third floors, and residences on the upper floors; or a combined retail project with a hotel, a university or even a hospital in the same area.

Statistics show a gradual increase of developments under the concept of multifunctional retail and property trends in Thailand in recent years. Some retailers have a hospital to provide patients in its area while some will have a university in the future.

All Seasons Place, for instance, is building the first mixed-used project comprising retail shopping, a hotel and an office building on Wireless road.

Mixed-used developments are widespread in the US, Japan, Hong Kong and Singapore.

Many major retail developers have recently announced mixed-use projects both in Bangkok and major cities.

These include the 350-rai Mega City project in Bang Na-Trat Road, Rangsit Plaza's Future City project on 600 rai in Rangsit, Seacon Development's Seacon City, The Market Bangkok by Platinum, Central Shopping Complexes across the country, TCC Group's One Bangkok on Rama IV Road and CPN-Dusit Thani project on the corner of Rama IV and Silom roads.

PTT Plc also plans to develop a mixed-use complex in Rayong province in the near future.

Apart from new projects, there are several projects being redeveloped into the mixed-use format. It is estimated that about 100 billion baht has been allocated to build mixed-use projects and redevelop existing retail projects within the next decade in Bangkok and upcountry.

Wallaya Chirathivat, senior executive vice-president of Central Pattana Plc (CPN), the SET-listed retail and property developer under Central Group, says CPN will spend about 12 billion baht to develop a condominium, a hotel and an office building in the same area of Central Plaza's Nakhon Ratchasima project within the next three to five years. Pre-sales will start next month for its 380-unit condominium project.

"The development of an office building, a hotel and a residential or retail project in the same area will augment the traffic and make our business more sustainable,'' Ms Wallaya says, attributing growing mixed-use developments in Thailand to urbanisation and the government's transport infrastructure expansion, growing tourism and higher land prices.

By the end of this year, there will be about 13 mixed-use developments under CPN out of the group's total 32 retail projects.

Ms Wallaya says there will be more opportunities to turn existing retail complexes into mixed-use ones.

Nopporn Witoonchart, chief executive of Siam Future Development Plc, the operator of J Avenue lifestyle centre and Mega Bangna, says the company will spend several billion baht to fulfil its Mega City projects on the 350-rai plot in Bang Na-Trat within the next few years.

At the same time, the company is expanding its land plot in Thong Lor district to nine rai from seven to redevelop its Market Place project from a neighbourhood store to a mixed-use project. About fives storeys of offices will be added along with a new restaurant zone. The total redevelopment will require an investment of 1 billion baht.

The company will also spend 400 million baht to develop phases three and four at the Mega City project for amusement, entertainment and edutainment on the space of 10,000 square metres. The fifth phase of the development will be for a hotel and an office building.

The 950-rai Rangsit plot is suitable for a township development, comprising residential, university and retail, according to Mr Nopporn.

The company did not disclose a clear action plan.

More mixed-use projects may be developed at its 50 rai plots in Bang Yai, nearby Central Westgate complex, says Mr Nopporn.

In Hong Kong and Singapore, big retail spaces were developed to support office buildings and residences.

"Hotel prices in Thailand remain relatively low although Thailand is a tourism country. If we can build a successful mixed-use project, comprising retail, hotel and residential, the value of return on investment will be higher,'' Mr Chanchai says.

Platinum Group will spend 3-4 billion baht to build 500 hotel rooms in front of The Market by Platinum project, located next door to Big C Ratchadamri, and 50,000 sq m of office space behind the retail area.

"Hotel and office buildings will help increase the number of shoppers per square metre. If our complex has more people walking, working and staying in the area, return on our investment will be better,'' Mr Chanchai says.

Future Park Rangsit is also conducting a feasibility study to build a satellite town on a 600-rai plot. About 200 rai was developed for the Future Park Rangsit shopping complex and the remaining 400 rai will be the site for a hotel, serviced apartments, condominiums and office buildings.

Nonetheless, the mixed-use project for Seacon Square on Srinakarin Road has been temporarily postponed as Seacon Development Plc awaits clearer city planning laws for the Srinakarin area and new government infrastructure in the area. 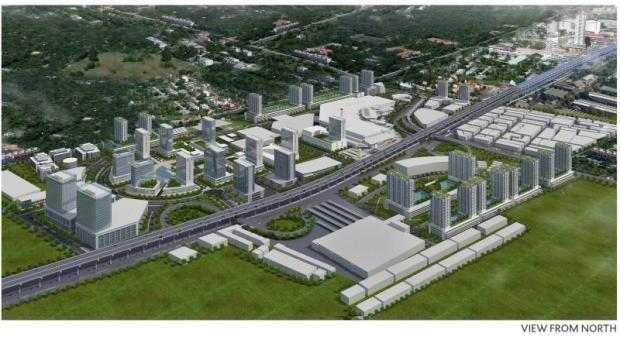 A digital rendition of Rangsit Plaza's Future City project, planned to encompass 600 rai in Rangsit. Many major retail developers have recently announced mixed-use projects both in Bangkok and major cities. 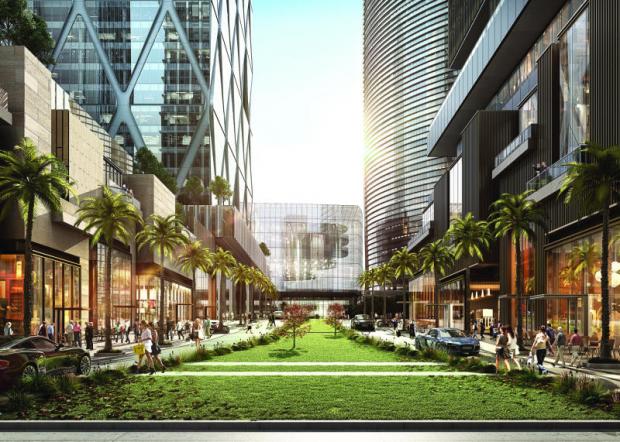 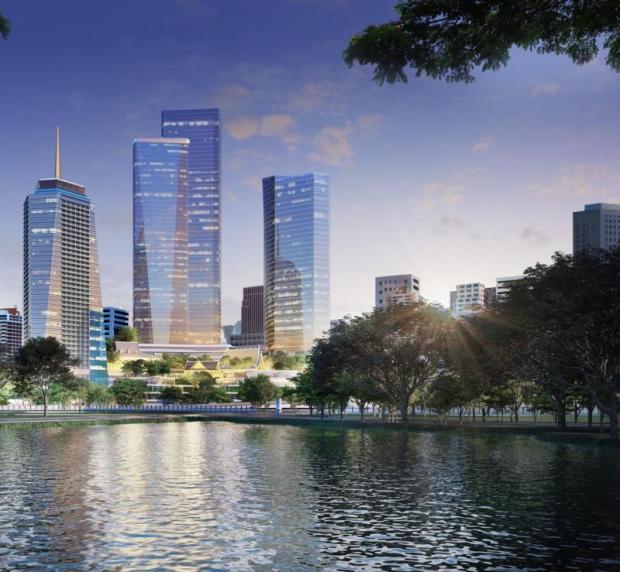 An artist's depiction of Dusit Thani's mixed-use project, featuring several towers and the new Dusit Thani Hotel on the left.