Hitachi Elevator (Thailand)'s sales are projected to grow by 15% to 1,100 units this year, even as the company braces for more aggressive competition from Chinese and Japanese counterparts. 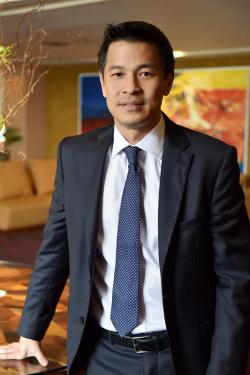 This year the maker, distributor, installer and servicer of elevators and escalators in Thailand predicts sales growth of 15%, compared with 10% for the overall market.

Michael Tang, assistant managing director, said the diminishing gap between Hitachi and the market average is partly caused by more aggressive competitors, as well as by a shift in strategy towards profitability.

"Competitors like Schindler are targeting growth of 200% this year," Mr Tang said. "Hitachi takes a more moderate line because we want to build a service team large enough to secure the profitable service contracts that come with new elevator sales."

For a number of years now, Hitachi and Mitsubishi have been contesting the top spot in the Japanese high-end elevator market. Hitachi held the top position in Thailand before 1997.

The gap closed rapidly, however, after Hitachi held a price umbrella that allowed Mitsubishi to scale up until 2011-12.

"We were on a high horse, but began pricing aggressively 6-7 years ago," Mr Tang said. Production cost, though, is similar across the major Japanese players, leaving little room for price reductions.

Mitsubishi holds 20% of the market, but Hitachi trails close behind with 18%.

"Our market share this year was higher than expected because Mitsubishi lost share and missed its target by 200 units," Mr Tang said.

"I am happy being number two," he added. "At this moment we are more concerned about the bottom line and price reductions on the factory side."

Low-cost Chinese manufacturers are a relatively new addition to the elevator industry and still hold less than a fifth of the overall market. Their production costs are lower, however, and they receive additional tax incentives from the government, making them attractive alternatives in the low-cost segment.

Mr Tang said Chinese products don't represent a threat to the business yet: "Customers looking at Hitachi or Mitsubishi elevators usually do not consider Chinese options."

Moreover, the low-end elevator market has remained stable for the past few years.

But Chinese players could represent formidable competitors to traditional Japanese manufacturers once they launch products with a similar lifespan and build -- a scenario that may not be too far off in the future, given their strong balance sheets.

"Hitachi may take a 10% premium, and our Chinese competitors a 40% premium, even though they offer lower prices," he said.

Moving forward, Chinese companies' financial strength could be translated into research and development or technology-driven acquisitions.

Mr Tang estimates that close to 13% of Hitachi Elevator (Thailand) sales could come from the Eastern Economic Corridor (EEC) region in the future, according to real estate projections. The gains have yet to materialise, however.

The company's sales in Northeast Thailand are currently larger than those in the East, and Bangkok (at 55%) still provides the bulk of revenue, according to Ms Ogawa.

"At this point it is hard to give a timeline, once tracks or roads are laid down we will start seeing real estate developments, and therefore demand for elevators," Mr Tang said. In addition, the project could go off track if there is a regime change in the upcoming elections.

The industry relies heavily on the government. According to Mr Tang, 30-40% of Hitachi Elevator (Thailand) sales come from government projects, a similar percentage to Mitsubishi's.

At the moment, planned mass transport projects in the capital, like the MRT Orange Line's eastern route, provide more realistic avenues for growth, he said.

"We are still waiting for a recovery of private sector investment, at which point government projects should represent no more than 25-30%," Mr Tang said.

SONGKHLA: You can find almost anything at a pawn shop — from gold necklaces to a ladder — when the coronavirus hits people's purses.