The Securities and Exchange Commission (SEC) has begun the public hearing process on details of the digital asset regulatory framework, with the initial retail investment amount in an initial coin offering (ICO) project capped at 300,000 baht.

The process started on May 16 and runs until May 30.

Once the process is completed, surveyed opinions will be considered by the SEC and the regulator will begin drafting an organic law to specify business qualifications, fund-raising framework and qualifications of different types of investors investing in digital assets.

The maximum investment value per project is stipulated at no more than four times the shareholders' equity of an ICO issuer and no more than 70% of the total value offered.

The SEC has the authority to prohibit any ICO offerings deemed lacking in integrity, transparency or compliance.

ICO transactions are similar to crowdfunding, whereby an issuer presents a business model to investors. The difference is that the raised funds are in the form of digital currencies using blockchain, and the deals are enforced using smart contracts.

ICO portals are expected to have a similar role to financial advisers and are poised to screen ICO offerings by conducting due diligence, examining the source code of the smart contract, overseeing the investment limit of retail investors and implementing a Know Your Customer procedure.

ICO portals must be entities established in accordance with Thai law, with minimum registered capital of 5 million baht.

Digital asset exchanges, meanwhile, are required to be entities established in Thailand and must maintain a minimum shareholders' equity of 50 million baht at all times. 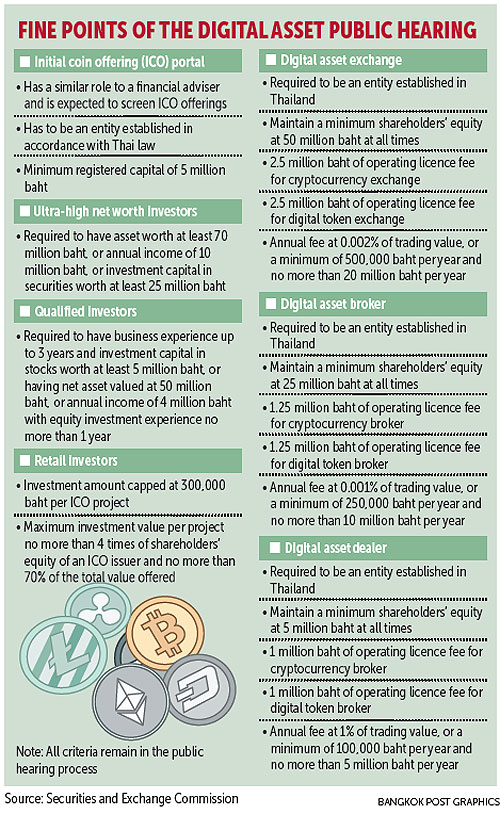 All market participants, including ICO issuers, digital exchanges, brokers and dealers involved with digital asset transactions, are required to register with the SEC within 90 days of the effective date. They must also receive the Finance Ministry's approval to conduct digital asset business.

Digital asset transactions will be subject to a 15% withholding tax on capital gains if there is a profit.

Sellers of unauthorised digital tokens will be fined no more than twice the value of the digital transaction or at least 500,000 baht. They could also face a jail term of up to two years.

New ICOs will be prohibited from launching during the public hearing process to draft an organic law on regulating digital assets, the SEC said.

Such organic law is expected to be unveiled in the middle of June, according to SEC secretary-general Rapee Sucharitakul.

Crypto Trading founder Sakolkorn Sakavee said he agreed with the investment limit for retail investors, as this would help curb risks for them in the event of an ICO project's failure.

But Mr Sakolkorn was sceptical of whether such a limit would be imposed on both Thai and foreign investors buying digital tokens with bitcoin or ethereum.

Makkhawan Voraboot, co-founder of the Bitwalex digital exchange, said digital asset exchanges and cryptocurrency e-wallet service providers agree with the new digital asset decree, but the 90-day grace period for market participants' registration is quite short in their view.

"In my opinion, it should take longer than a year and the law should be flexible due to constant changes in technology," Mr Makkhawan said.