SET-listed Charoen Pokphand Foods Plc (CPF), a Thai agro-industrial and food conglomerate, is looking at merger and acquisition (M&A) opportunities at European processed food factories to support its target of growing its nutrient food business to 30% of total revenue by 2030. 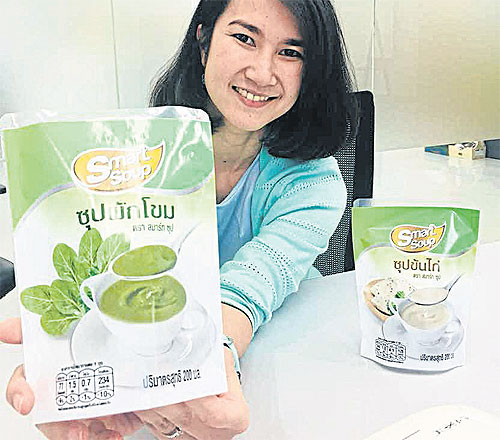 One of CPF's easy to digest soup products.

"We are looking for a global opportunity to grow our food exports. There might be an M&A of processed food factories in Europe such as Poland or Belgium," said Sukhawat Dansermsuk, chief executive for food business and co-president.

Global investment and diversification are in line with the company's strategy following CPF's recent acquisition of a 40% stake in one of Brazil's leading shrimp farmers and processors, Camanor Produtos Marinhos Ltda, marking the group's first expansion into South America.

The company also acquired a 95% stake in Paulsen Food GmbH (PF) for 466 million baht in mid-June 2017, a move aimed at expanding its food business in Europe.

In 2016 CPF clinched 11 overseas investment deals worth nearly 50 billion baht, including one with Bellisio Foods, one of America's fastest-growing frozen food firms, in December for some US$1.08 billion (37 billion baht).

Oversea investments in 15 countries accounted for 66% of total sales in this year's first quarter, while domestic sales and exports accounted for 29% and 5%, respectively.

The top three markets for the company were Thailand, China and Vietnam, which accounted for 73% of CPF's total sales.

Mr Sukhawat said the company will continue focusing on innovative and ready-meal foods to support the global trends of ageing society and health-conscious mentality.

The food business, which involves production of semi-cooked and cooked meat, ready-meal products and food retail stores and outlets, contributes to 18% of the company's total revenue, while healthy food, including healthy meals and healthy drinks, accounts for 20% of the food business.

Although Thailand's market for healthy food is not large, there is a good growth potential over the next five years as the country will have an estimated 14 million elderly by that time who will need foods that are easy to chew, absorb, and digest, said Mr Sukhawat.

CPF also plans to launch "Culinear", a school for culinary arts and entrepreneurship, at the THAIFEX - World of Food Asia 2018 from May 29 to June 2.

CPF shares closed yesterday on the Stock Exchange of Thailand at 24.90 baht, a decrease of 10 satang, in trade worth 891 million baht.