A Revenue Department official recommends a new Environment Tax on all products with the potential of later becoming e-waste or plastic pollutant. (File photo)

The Finance Ministry has floated the idea of imposing an environmental tax in a bid to reduce electronic waste.

But taxation should be adopted in parallel with raising public awareness and encouraging recycling in a comprehensive effort to address the rising e-waste problem, Mr Prasong said.

Thailand is becoming a dumping ground for electronic and plastic waste after China banned the import of such refuse last year. 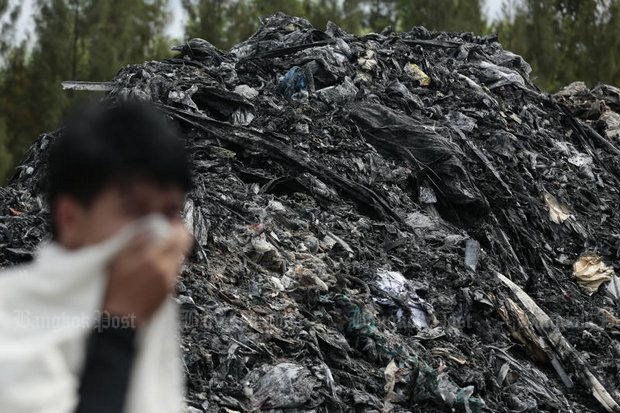 In addition to being toxic and unsightly, electronic waste has a terrible stench, as this man discovers at an illegal dumping site at a reservoir in Rayong province, where some 60,000 tonnes of e-waste has been discarded. (Photo by Patipat Janthong)

On the Excise Department's idea to charge a levy on shopping bags to reduce plastic consumption and pollution, Mr Prasong said it was one of several measures under review by the Finance Ministry, which will also weigh the additional costs and impact on the public of such a move.

But he said government measures are insufficient, as the public must play a role as well, since e-waste comes not only through importation but also domestic consumption.

"The overall picture must be considered, as we don't want toxic waste to be left in Thailand," Mr Prasong said. "Manufacturers must take responsibility for disposing of such waste.

"We must [handle waste] in a sustainable manner. Each plastic bag takes hundreds of years to decompose. Electronic waste has dangerous chemicals. [It's a problem] when e-waste leaks into groundwater or canals."

Mr Prasong gave the example of Sweden. The country converts plastic waste into electricity and now must import such waste to generate power, he said, adding that other countries charge fees for plastic bag usage.

While Thailand has regulations governing what e-waste enters the country, illegal e-waste is still smuggled in.

The Customs Department has an X-ray system to inspect cargo, but it's difficult to identify whether goods loaded in the containers constitute waste, Mr Prasong said.

To address the problem, the Customs Department has decided to open all cargo containers loaded with e-waste, he said.

"Under my direction eight years ago, when the Customs Department found illegal e-waste, it was sent back," Mr Prasong said. "Some of it was shipped from European countries. Thailand is often a destination [for waste], as it is easy to send it here. Some people just want to get steel and bronze scraps to sell, but many chemical substances are left here."