30 years of the Bangkok condominium market

From bare-bones shells and rampant speculation to the fully fitted homes of today, sector has undergone a remarkable evolution

At prices that have reached 700,000 baht per square metre, 98 Wireless tops the table in the current condo market in Bangkok.

The evolution of the condominium market in Bangkok has been one of the most remarkable aspects of the property business in the 30 years since CBRE established its first office in the capital, says Aliwassa Pathnadabutr, managing director of CBRE Thailand.

"When I first joined the company, which was called Richard Ellis in 1988, there were only about 2,600 completed condominium units in downtown Bangkok and now there are 140,000 and about 630,000 in the whole city," she said.

In 1988, it was possible to buy a condominium unit off-plan in downtown Bangkok for around 20,000 to 25,000 baht per square metre, but purchasers got a bare concrete shell with a very basic bathroom. There were no wall, floor or ceiling finishes, no fitted kitchen, air-conditioning, lighting or electrical outlets provided by the developer.

Today most condominiums are sold on a fully fitted basis, including air-conditioning and kitchens with appliances, and purchasers just need to provide loose furniture.

Prices for new buildings have risen by more than 1,000% with many new condominium units selling for more than 300,000 baht per square metre in prime locations.

In the late 1980s, the most expensive condominium project was Somkid Gardens, behind Central Chidlom department store, where you could have bought a unit off-plan for around 35,000 baht per square metre, according to Ms Aliwassa. Today the most expensive condominium development in the city is 98 Wireless where the developer, Sansiri Plc, says it has sold a unit for more than 700,000 baht per sq m. 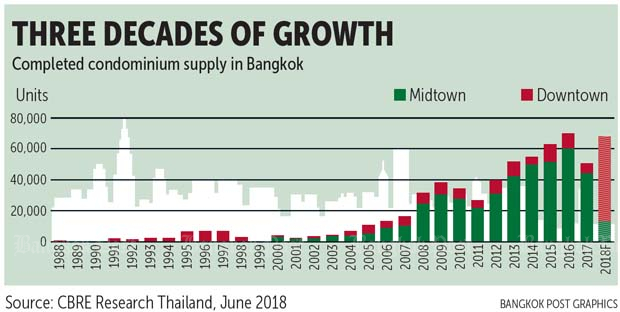 The Condominium Act permitting the sale of freehold strata title condominium property came into effect in 1979 and for the first few years there was only limited development.

The late 1980s and early 1990s were Thailand's "Asian Tiger" years where more than 90,000 condo units were built in Bangkok. The market was highly speculative with people trading off-plan contracts as if they were shares, with little thought about design, specification or who the end-user target market was.

The result was that some of the developments from that period were of quite poor quality. The speculative bubble started to cool in 1994 and finally burst in 1997 with the Asian financial crisis. The market came to a halt with construction stopping on half-built projects and no sales.

Prices did not immediately fall as the foreclosure process was very inefficient, and it was not until the early 2,000s that unsold inventory was cleared and unfinished projects started to be completed. The first new launches did not take place until 2003.

"Since then there has been a big jump in demand, especially in the midtown areas, as young people now leave home before marriage and can afford to buy their own home," said Ms Aliwassa. "It is this social change and increase in disposable income that has fuelled the mainly one-bedroom midtown condominium market."

Wealthy Thais have also started to favour living in a condominium, especially as Bangkok has become a more geographically centrally focused city with the best offices, shopping centres, restaurants and hospitals being in the city centre.

The mass-transit system has anchored the city centre which is now far more clearly defined and condo developments have been clustered around mass-transit stations in the central, midtown and suburban areas.

Overall the Bangkok condominium market has seen 15 years of growth with only a brief slowdown during the 2008 global financial crisis.

The Bangkok market still has one feature that makes it different to many other property markets around the world and that is the relatively low level of secondary sales. Most Thai buyers still prefer new properties bought off-plan or on completion. There are speculative buyers who purchase with intention of reselling before construction is completed, but there is a relatively low level of resales after completion.

The gap in pricing between new and old condominiums is growing and only a few buildings more than five years old have prices that are close to those of new projects in the same location, according to CBRE.

In Singapore, owners of some older buildings have agreed to sell the whole block in a collective sale for redevelopment where the land value now exceeds the total price of all the units, but that has not happened in Bangkok, partly because the Thai condominium law requires 100% agreement of all co-owners to revoke the condominium.

"I have seen a huge improvement in design, specification and build quality over the last 30 years with developers clearly focused on end-user requirements," said Ms Aliwassa. "Looking forward, the market will fluctuate depending on the economy and we may see a more active interest in older buildings as purchasers start to see the value in renovation, but there will always be demand for new buildings."