The banking industry occupies five places in the 20 most popular apps in Thailand, including four of the top six. 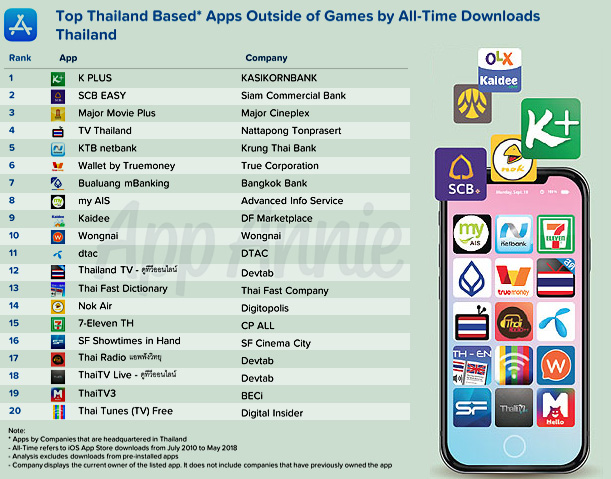 This month marks the 10th anniversary of Apple's App Store in Thailand. Local mobile agency Appsynth studied Thailand's top apps of all time and the reasons why they became popular.

The App Store recorded more than 170 billion downloads, totalling over US$130 billion (4.35 trillion baht) in global user spending over the past decade.

The rank is based on total installed volumes of non-game apps by Thai publishers, compiled by AppAnnie, the global leader in app analytics and app market data.

While one might expect banks to enjoy high download numbers given their large existing customer bases, this dominance reflects how heavily many Thai banks are investing in digital platforms.

Most countries do not see banking apps dominating install rankings so significantly, making this a unique characteristic of the Thai market. As a result, 56% of Thais now report using mobile banking.

In many countries, long-established banks are losing market share to digital-first challenger banks and fintech startups seeking to disrupt the banking and financial service industries.

Thai banks have done well reinforcing their positions, providing platforms for collaboration rather than competition with promising fintech startups in the form of accelerator programmes, while heavily investing in their own mobile channels.

As a result of this continued investment, Kasikornbank and SCB occupy the top two spots on the list, Appsynth said.

Alternative banking is also hot on the heels of traditional banks. TrueMoney Wallet (in fifth place) enables its users to make in-store purchases, scan and pay bills, and top up phone credit, among other things.

TrueMoney Wallet can be auto-topped up when connected to a bank account or manually topped up with cash, enabling digital money transactions for the unbanked population.

In third place sits the only app on the list created by an independent developer, Nattapong Tonprasert. TV Thailand has been a massive hit with users across the nation. The app provides access to Thai drama series, cartoons and music videos, enabling Thais to have their favourite TV shows at their fingertips.

Some 51% of Thais report watching video on their smartphone daily and 81% at least once a week, which has resulted in streaming video being well-represented on the list, with four different apps featured. The ThaiTV3 app, now branded as Mello, is the only one of these directly published by a broadcaster.

Wongnai is one of only two mobile-first startups on the list. Founded in 2010, Wongnai has become the top directory for restaurants in Thailand.

"The list represents a diverse cross-section of the industry, providing a lens into modern life," Appsynth said.