The government is stepping up its efforts to attract Chinese investors with its development of infrastructure and services to connect with China's Belt and Road Initiative.

The flagship Eastern Economic Corridor (EEC) is designed to correspond with Chinese initiatives along the north-south and east-west economic corridors, said Kanit Sangsubhan, secretary-general of the EEC Office.

"Thailand is confident that our corridor can connect with other countries in Southeast Asia through the CLMV countries [Cambodia, Laos, Myanmar and Vietnam] at the same time as China expands its trade and investment in the region," he said.

"The Belt and Road initiative will link Southern China to Laos [via rail initiatives], entering through Nong Khai and Khon Kaen in Thailand and extending down to Myanmar.

"The EEC locations in Chachoengsao, Chon Buri and Rayong can connect with Cambodia and Vietnam via Sa Kaeo province," Mr Kanit said. 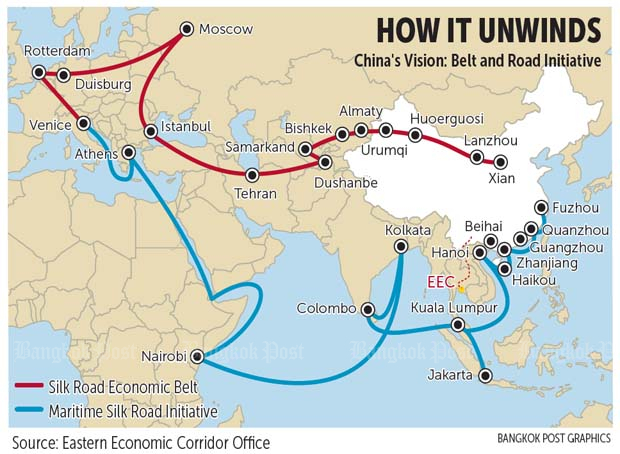 He added that embracing modern technology and methods is all part of attracting investment from China, India and Japan, all of which are looking for business opportunities in emerging countries.

"We believe that Thailand has huge potential as a logistics hub and business centre, especially as it is renowned for its ability to cooperate economically not only with regional neighbours but also on the world stage too," he said.

Deputy Prime Minister Somkid Jatusripitak said the government wants to promote the EEC as a key driver for the country's economy.

"Chinese investors are interested in our infrastructure projects, new technology and innovation in the EEC locations," he confirmed.

Thailand and China are set to agree 17 memorandums of understanding, five of which were signed on Friday when Mr Somkid accompanied Wang Yong, a member of China's State Council and Chinese investors on a visit to U-Tapao airport and Laem Chabang seaport in Chon Buri and Amata City Industrial Estate and WHA Industrial Estate in Rayong.

This project is now under a bidding process consisting of 31 firms from Thailand, China, Japan and South Korea.

The government expects to announce a winning bidder by 2018.

Furthermore, the government will launch the terms of reference for bidding on phase three of the expansion of U-Tapao airport and Map Ta Phut seaport in October.

Mr Kanit said that the development of U-Tapao will cost 200 billion baht and accommodate higher volumes of passengers, freight and flights.

The project also includes the construction of a second runway and third terminal as part of a strategy to develop an aviation-related industrial hub in the region.

U-Tapao airport is expected to handle more than 60 million passengers over the next 20 years.

Uttama Savanayana, Industry Minister, said it is forecast that the EEC project will bring in investment of more than 1.7 trillion baht (US$49 billion) by 2021.

The government hopes to develop 168 infrastructure projects worth 988 billion baht. Of those, 59% will public-private partnerships worth 583 billion baht.

There will be an annual government expenditure of 296 billion baht, while state enterprises' will contribute 98 billion baht. The Royal Thai Navy will also contribute 1% towards the total value of the scheme. 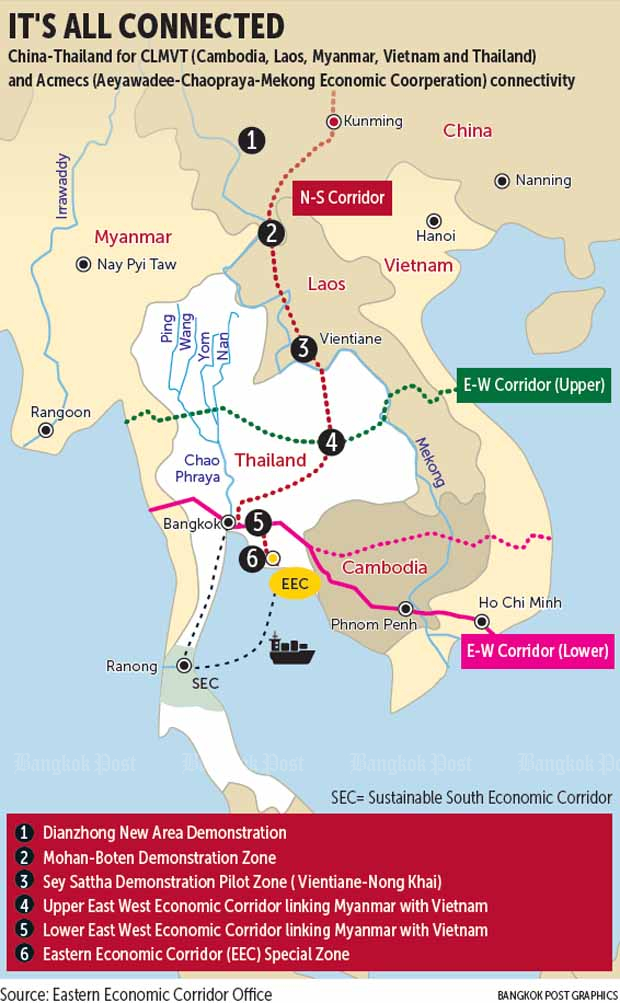