Siam Commercial Bank's cost-to-income ratio is expected to peak by the first quarter of next year after hefty investment under the five-year SCB Transformation programme.

The ratio is unlikely to hit 50% and this year's cost-to-income ratio will be in line with the bank's guidance of 45-47%, Arak Sutivong, chief financial officer and chief strategy officer, told the Bangkok Post in an exclusive interview.

The country's second-largest bank by assets saw its cost-to-income ratio, which measures operating costs as a percentage of operating income, climb to 45.9% in the first half from 42.3% last year and 38.7% in 2016 when SCB Transformation kicked off.

The SCB Transformation programme has a combined investment of 40 billion baht.

The rising investment cost pressured the bank's second-quarter net profit, which fell by 6.7% from a year earlier to 11.1 billion baht, while the bank's elimination of digital banking transaction fees dealt a further blow to SCB's quarterly bottom line.

Mr Arak was quick to alleviate jitters, saying that investment will decline after the peak cycle, and after the transformation programme ends in 2020 the ratio will set a new normal of just above 30%, well below 35-36% in the past.

Almost all major investments, including infrastructure, big data and IT, have already started, he said, adding that investment allows the bank to handle unlimited financial transactions over digital channels and pave the way for a shift towards customer-centric banks. 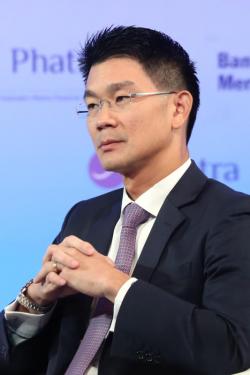 "Once the barrier [transaction fees] disappeared, people have increasingly begun to use the bank as a host for payments, as we've seen by observing changing customer behaviours," he said. "Even though the fee waiver comes at a cost [as money transfer recipients' banks still charge senders' banks interchange fees], the bank, in terms of net effect, has gained higher savings deposits."

The bank aims to close less than 200 traditional branches this year, with around 100 having closed in the first half, Mr Arak said.

Number of SCB's branches will be 600-700 in all formats with exception of SCB Express (the automated banking service) in the next few years, he said.

Regarding interchange fees for online financial transactions, Mr Arak expects that the Thai Bankers' Association will soon discuss whether interbank money transfer fees over digital channels should be scrapped.

Mr Arak said that digital lending is one of the bank's major investments.

With digital lending services, the bank will be able to offer loans to customers everywhere in the future.

For example, the bank's loan options will pop up when customers are seeking information to purchase products, he said.

Full-scale digital lending is expected to be available next year, he said.

"We've so far considered borrowers' risk profile and collateral, we've never taken their behaviour into account," Mr Thana said. "We must change the way of thinking, it's not easy but it's the practice that the bank must move towards."

The bank has rolled out digital personal products since January this year, but the service is limited to only existing customers and the soon-to-be-implemented national digital ID is expected to open up opportunities for the bank to offer the products to new customers.

Mr Thana said that data-based lending by digital giants like Alibaba have soured loan rates that are close to zero.

"Collateral doesn't determine good or bad people, but it hinges on habits," he said. "Good guys try to make payments even if they are cash-strapped, while those with bad habits always cheat, even if they have money."

He said stand-alone branches will be reformatted, while branches in department stores or community malls will remain unchanged.

Raising deposits through branches might not work as consumer behaviour changes, but making bank payments on the digital platform will help increase savings, Mr Thana said.