Starting Sunday, Dtac customers on the old 850MHz bandwidth are going to get a 'No Service' notice when they turn on their phones. A million Dtac users will get the same message if they are using roaming services.

The telecom regulator dealt a resounding blow to Total Access Communication (Dtac) Wednesday by ruling against the third-ranked mobile operator's request to retain its 850-megahertz customers for a remedy period.

The ruling will result in a switch-off of Dtac's 850MHz service after Sept 15, the expiry date of the 28-year concession of Dtac under CAT Telecom.

The National Broadcasting and Telecommunications Commission (NBTC) said Dtac has more than 90,000 customers on the 850MHz network. Dtac says its entire customer base of 21 million could face mobile network problems in areas covered by the 850MHz spectrum.

"After NBTC issued an administrative order Wednesday, Dtac has to switch off all communication signals on the 850MHz spectrum at midnight sharp on Sept 15, the expiry date of the concession," said NBTC secretary-general Takorn Tantasith.

"Dtac needs to immediately migrate the existing 94,000-plus users on 850MHz to other spectra within the remaining three days," he said, "which is possible because the capacity on the mobile number portability system is up to 60,000 numbers per day."

Rajiv Bawa, Dtac's chief of corporate affairs and business development, said the company "is awaiting the Central Administrative Court's ruling" on the case. The ruling is expected before the concession's expiry date.

The NBTC board voted 4-2 against Dtac's proposal, with six of the seven members taking part in the meeting. Four members opposed offering any redress. The two others, Prawit Leesathapornwongsa and Thawatchai Jittrapanun, were in favour of giving Dtac extra time. One member, Col Natee Sukolrat, was absent.

The proposal required four yes votes out of seven at the board meeting.

Mr Takorn said the NBTC board weighed in on the available information and found that offering a remedy period for Dtac would conflict with Section 3 of the NBTC's existing regulations concerning remedy measures.

There were also several reasons why Dtac did not deserve extra time, according to Mr Takorn.

First, Section 3 states that if any concession ends with substantial numbers of users on the network without a timely auction by the NBTC before the expiry, operators are allowed to keep running the service for the remaining users to prevent service disruption.

"Active users" on Dtac's 850MHz network fail to meet the definition of "substantial number of users on the network", according to Section 3, Mr Takorn said.

Of the 94,625 total users, just 60,000 are registered as individuals and the rest of the numbers are for Internet of Things (or machine) purposes.

Dtac often implies that millions on the roaming network would face a disruption of service without the remedy period, Mr Takorn said, but Dtac cannot include mobile numbers of its subsidiary Dtac TriNet or cite disruption of roaming network users in some areas. Although such users may be affected via the 850MHz roaming network, they are not precisely serviced under the concession.

Second, Mr Takorn pinpointed that the NBTC held an auction for the 900MHz spectrum and set aside a proper transition period that would have allowed the auction block winner to completely upgrade all network equipment for 850MHz to 900MHz performance. Dtac chose to be absent for the auction.

Mr Takorn noted previous cases in which hundreds or thousands of mobile SIM cards faced disruption after the expiry of a service provider's concession.

For example, with the 1800MHz spectrum in 2015, the NBTC had given a remedy period for True Move and Digital Phone Co, as there was no auction held before expiry of the concessions. But True Move switched off 200,000 numbers after the end of remedy period, while Digital Phone (DPC), a subsidiary of mobile leader AIS, cut off the network for 40,000 numbers.

The NBTC cut off 10 million SIM cards in 2015 when the owners failed to register under the NBTC's new registration system, Mr Takorn said.

"We will wait for the Central Administrative Court's ruling for a final verdict," Mr Bawa said.

In a statement on the company's website Wednesday, Prathet Tankuranun, Dtac's chief technology officer, said: "More than 300,000 customers using the expiring 850MHz spectrum on 2G will be disconnected, with another 1 million users to be affected as the spectrum has a roaming network of Dtac as well." 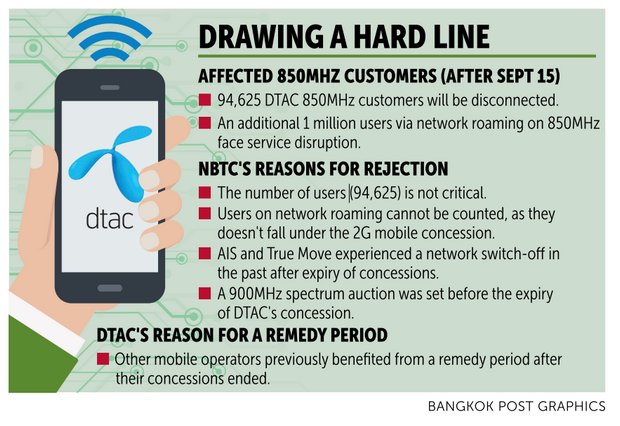 Dtac's concession for 850MHz spectrum is scheduled to expire on Sept 15 after 27 years in operation. Initially the mobile provider expected remedy measures from the NBTC to extend usage of the 850MHz spectrum after the expiry date.

But, with just a few days before the spectrum concession expires, the NBTC board ruled that there will be no remedy measures from the NBTC. There will likewise be no extension whatsoever for the 850MHz concession.

Furthermore, the National Media Network Against Corruption and True Move have accused the NBTC of negligence.

"Our customers are of the highest priority," Mr Prathet said, lamenting the impending switch-off. "On this occasion, please accept our most sincere apologies."

Since early 2017, Dtac has been expanding its 4G services on the 2100- and 2300MHz networks to quickly expand nationwide coverage. While this rapid expansion is taking place, some customers in certain areas may temporarily experience service difficulty.

To smoothen the transition, Dtac has prepared responsive plans to support these customers and has begun to contact them directly, Mr Prathet said, adding that Dtac is "fully committed and dedicated to better support our customers".

Somchai Lertsutiwong, chief executive of Advanced Info Service, said AIS faced similar challenges in 2015 when its 900MHz concession expired and AIS failed to grab a licence for 900MHz at the first round of auctions in December.

At that time, AIS had a significant number of customers on its 900MHz network.

But JAS Mobile Broadband, which had won the 900MHz licence, failed to make its first licence payment due in March 2016. AIS eventually acquired JAS's license.

"We have faced this problem and we overcame it, and I personally believe Dtac can overcome it," Mr Somchai said.

The NBTC's decision to switch off Dtac's 850MHz service after Sept 15 has caused uncertainty and negative sentiment for the company, said Asia Plus Securities (ASP).

In the worst-case scenario in which Dtac customers are affected by the switch-off and they then migrate to another telecom operator, this would dent Dtac's earnings by 3.2% and cause a 40% decline in profit, subsequently affecting the fundamental value of Dtac shares by about 10 baht, according to ASP.

Asia Wealth Securities analyst Nutchapol Cheevavichawalkul said investors are advised to sell Dtac shares because the price is projected to fall to 39 baht a share, down from the previous target price of 47 baht, in the wake of the NBTC's unfavourable ruling.

Its 2019 profit is expected at 4.5 billion baht because of the lower operating cost of concessions, he said.