Investment and business consultant PNN Capital Co will introduce a condominium in Manchester to Thai investment buyers as an alternative to London apartments because the northwestern English city is drawing relocations of large firms.

Managing director Saowarat Banyongpatthana said many Thai parents and investors are interested in British property for their children's education and as an investment, but their budget is insufficient to afford a unit in London. 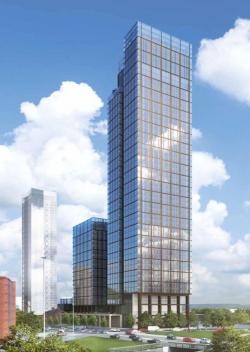 At 52 storeys, Elizabeth Tower will be the highest building in Manchester. It will have 484 units sized from 50 square metres and priced from 10.3 million baht.

"The British government has promoted Manchester as a second hub to London since 2014, with investment in infrastructure, utilities and high-speed trains," Ms Saowarat said. "It also offers tax incentives for companies that relocate there."

By 2022 there will be 55,000 new jobs in Manchester from the property sector, which is investing in the development of new property projects like offices and residences.

There will also be workers from giant firms relocating headquarters to the city, including BBC, Siemens, Adidas, Google, Amazon and DHL. They will drive residential demand for units to buy or rent in the city.

According to a survey among juristic persons at existing apartments in the city, rental yield per year in Manchester is about 7%, while capital gain will be 22.8% in five years.

PNN will introduce 40 units worth 1 billion baht at Elizabeth Tower, a new luxury condominium in Manchester, to 40 potential buyers on Nov 3.

The buyers are either business owners or alumni of British schools who have at least five properties worth more than 100 million baht on hand.

"It is easy for those with a net worth of at least 100 million baht to allocate 10% of their net worth to invest overseas," Ms Saowarat said, adding that the company aims to have six units sold this year and 10 more in 2019.

Construction will conclude by the fourth quarter of 2021.

PNN is also in talks with Thai investors to introduce Victoria Residence with 180 units worth 3 billion baht to sell the whole project, as there are some Thai companies looking for an overseas property in which to diversify.

Ms Saowarat said the company additionally is making a deal with Citic Construction, a state-owned Chinese construction firm, on a condo project worth 1.1 billion baht in Pattaya that began foundation construction but lacked the financial liquidity to finish.

"Chinese investors are looking for property and infrastructure projects in Thailand to invest in," she said. "They require a project with a sales value of at least 1 billion baht and presales of at least 40%."

She expects the deal, discussions for which started in December 2017, to be finalised in the first half of next year.

In 2019, PNN will give consultancy services and invest in a small contractor to boost its capacity to take construction jobs to a combined 100 million baht a year, up from less than 20 million baht now.

"We will help this contractor manage back-office jobs, improve cash flow and seek potential investors to invest in," Ms Saowarat said. "We will focus on IT and real estate, as our team has expertise in these two sectors."

Founded last year, PNN spent 1 million baht in November 2017 to invest in Drop Point Plus, Thailand's first total service for e-commerce, which was launched in September this year.

PNN holds a 70% stake in the startup firm.