Opening the gates to salvage tourism

Fixed securely in one of the world's holiday hotspots, Thailand's booming tourism industry is nonetheless experiencing uneasiness like never before amid safety concerns and growing discontent over declining arrivals from China.

Chinese travellers have held Thailand in high regard as their favourite overseas destination for years. But things turned sour after a tour boat capsized off Phuket in July, claiming the lives of 47 Chinese holidaymakers. 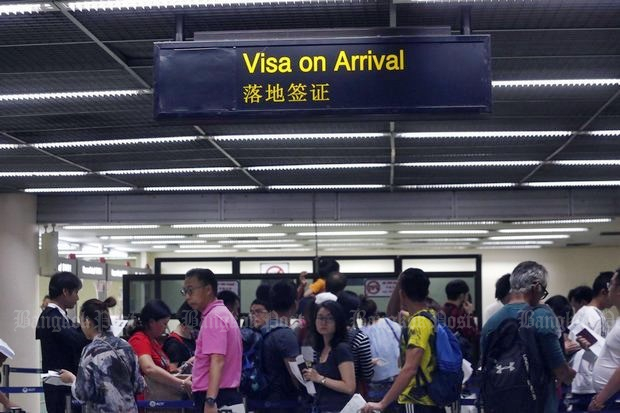 Chinese and Indians are among the people of 21 nationalities qualifying for free visas on arrival - a savings of 2,000 baht per passenger. (File photo by Pattarapong Chatpattarasill)

The government waffled before finally giving the nod to an exemption from visa-on-arrival fees for 21 countries, part of efforts to boost arrivals during the tourism high season.

The move is viewed as a desperate attempt to reclaim high tourist growth after seeing arrivals from China, Thailand's biggest source of inbound arrivals, decline for a fifth straight month since July.

In the first nine months of this year, there were 28.54 million foreign visitors, up 8.7% year-on-year. Chinese arrivals grew 13.3% in the same period, but they dropped 8.8% in the third quarter.

The government last Tuesday granted a measure to waive visa-on-arrival fees for two months for visitors from 21 countries. The 2,000-baht fee will be waived from Dec 1 to Jan 31.

The initiative is expected to boost total visitors by 7.1 million for the two remaining months and is anticipated to increase this year's overall arrivals to 38.4 million. 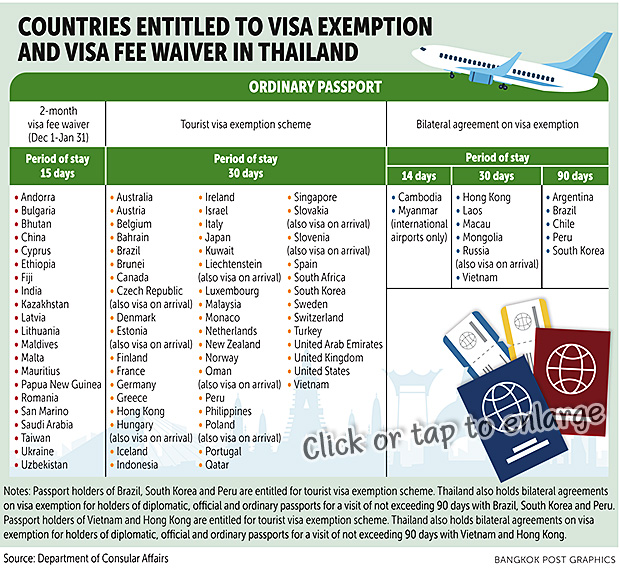 But some argue that such an ad hoc policy isn't the right solution to garner confidence in Thailand's tourism industry and is irrelevant to the existing problem.

Tourism experts say that modern tourists are seeking a meaningful trip and a good impression, as well as travel in comfort. With the greater prevalence of such behaviour in mind, tour operators have formulated tourism packages based on customer lifestyles and expectations.

Supawan Tanomkieatipume, president of the Thai Hotels Association (THA), said the latest visa-on-arrival policy is targeted mainly at tourist arrivals from China and India, which are the top markets for inbound tourism.

The offer will definitely boost tourists from India, Mrs Supawan said, but it could fail to tip the balance for the Chinese.

What Thailand is facing is an issue of emotional insecurity from Chinese tourists, she said. This is remarkably different from previous problems stemming from natural disasters or domestic political turmoil.

"This is the first time that we are facing an emotional problem for tourism," Mrs Supawan said. "The sector used to experience many crises in the past, and the recovery was fast. It is different this time, and we have to address their concerns accordingly."

Without question many Chinese were put off by the government's reaction to the boat disaster, judging from the decline in advance bookings made by tour operators at hotels in major provincial destinations.

On a regular basis, operators should have secured an average occupancy rate of more than 80% because of the high season period.

In addition, average room rates are flat because of lesser demand. Hotel operators should have increased their room rates by 5-10% during the high tourism season.

"The most important thing is to ensure safety and security for tourists," she said. "Safety must not be only on paper, but it must be put into action."

The THA predicts that the Chinese tourism market will see an uptick next year, especially during the Chinese New year period.

But slower economic growth in China and the ongoing Sino-US trade row are complicating factors keeping a lid on Chinese arrivals to Thailand.

If these problems don't moderate in 2019, the number of Chinese going overseas will more than likely drop and Thailand's tourism industry will endure even more pain than it experienced this year.

The World Travel and Tourism Council (WTTC) said research shows the sort of benefits that secure visa facilitation regulations can bring to a country in terms of promoting travel and tourism and driving job growth.

Amid the global tourism boom, many countries, especially in Asia, have offered visa facilitation to lure foreign tourists.

In 2013, Japan waived visas for certain countries as part of efforts to boost its tepid economy. The visa-free policy helped boost the number of Thai tourists in Japan to nearly 1 million last year, about five times the level in 2012.

Indonesia, one of the world's most liberal countries when it comes to visas, grants visa-free travel to citizens of 169 countries. The plan is to get 8% of Indonesian GDP from the tourism sector and attract 20 million visitors in 2019.

Thanawat Polvichai, director of the Center for Economic and Business Forecasting at the University of the Thai Chamber of Commerce, said the visa fee waiver in Thailand should provide a boost in Chinese tourists, especially those in the lower-income segment travelling with tour groups.

"This will subsequently help local businesses to receive more tourism revenue," Mr Thanawat said. "Despite lower visa fee revenue, the scheme is considered a word-of-mouth marketing strategy, and the lower revenue can be compensated by tourist spending on products subject to value-added tax."

Although the visa fee waiver is in place, authorities have to implement other initiatives to boost tourist confidence, he said, such as disseminating correct information and ensuring safety for tourists from the moment they arrive at the airport.

But Prachyakorn Chaiyakot, vice-president of the Thai Responsible Tourism Association (TRTA), argued that having too many inbound tourists could bring problems such as over-tourism in some areas.

The TRTA has urged the government to help local communities create their own tourism products, provide hospitality training and improve business management in order to attract tourists.

"The most important thing is to focus on quality tourism rather than quantity," Mr Prachyakorn said. "Outspreading tourists from 10 major provinces to second-tier provinces is a wise strategy for long-term growth."

Standard Chartered Bank Thai economist Tim Leelahaphan said the visa fee waiver should be effective in boosting year-end tourism, as there was a similar initiative rolled out in 2016 and 2017, which saw a boost in inbound Chinese arrivals during the zero-dollar tour crackdown in 2016.

"But Thailand could have reaped greater benefits if this measure was rolled out in the third quarter," Mr Tim said. "Foreign tourists might have already booked other travel destinations for the New Year."

The drop in Chinese travelling to Thailand is a classic example of how the government badly handles safety problems, said Nimitz Modrakee, chief executive of 124 Communications Consulting Co. 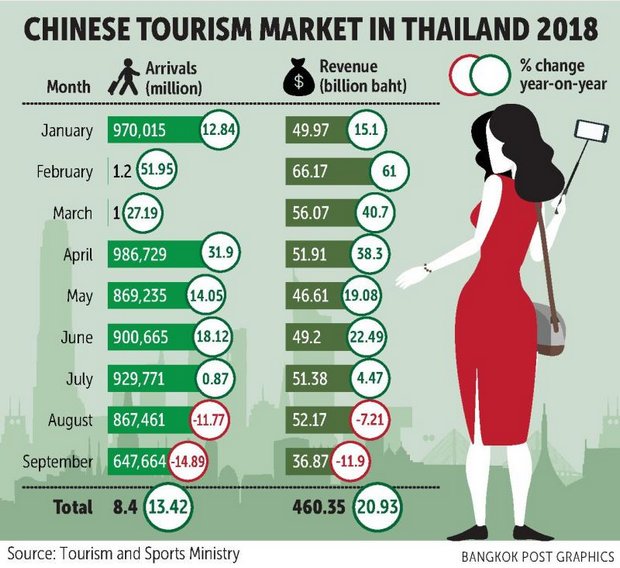 "The problem simply stems from a quick comment from the government's VIP to the media, which ends up spreading a misunderstanding among the public and those involved in such an incident," he said. "Of course, pressure from the media may have forced him to make such a comment, but without solid evidence to prove his remarks, he should not have said words that hurt those involved in the tragedy."

According to Mr Nimitz, businesses and organisations are subject to a multitude of events that can trigger a crisis. Some crises are managed as part of the business continuity plans or risk management process.

But there is also a type of crisis triggered by unforeseen or unexpected scenarios. In many cases, a crisis will evolve and cause multiple impacts to relevant stakeholders. A poorly managed crisis response commonly results in persistent damage to the brand, its reputation and business continuity, Mr Nimitz said.

It's therefore of utmost importance for leaders to invest time and resources in crisis management, with clear communication and contingency plans for both unexpected and anticipated scenarios.

As an undisputed travel destination, Thailand needs to do more than offer generous visa exemptions and visa fee waivers to regain the trust and confidence of visitors, Mr Nimitz said. Accidents can happen anywhere, but the severity can continue to escalate when the public feels law enforcement is vulnerable.

Aside from Chinese holidaymakers, Thailand owes a commitment to provide the best possible safety measures and standards to citizens and all foreign visitors. Applicable laws must be enforced and the public must be informed of such measures via media platforms, with social media an especially effective medium for swift communication.

"The government should make this a national agenda if Thailand wishes to see growing and sustained income from tourism and related industries," Mr Nimitz said. "A nationwide campaign [to ensure safety] should be implemented by the government. All concerned business leaders related to the tourism industry and the government have to make a public declaration and commitment to safety standards."