A shopper heads for the parking lot after checkout on Tuesday - the first of a promised monthly 'no-plastic bag' days by some supermarkets retail stores. (Photos by Patipat Janthong)

As many as 40 retailers and store operators have entered an agreement with the Mineral Resources Department not to provide plastic bags on the fourth of each month.

They all pledged to support activities aimed at reducing the use of plastic bags. Retailers also committed to launching promotional campaigns and educating consumers on the environmental dangers of single-use plastic.

Waste from plastics amounts to roughly 2 million tonnes or 12% of all rubbish in Thailand each year. Of that total, just 0.5 million tonnes is recycled, according to the Pollution Control Department.

The department reports that about 45 billion plastic bags, 6.76 billion food containers and some 9.75 billion single-use plastic cups are used every year.

Phattaraporn Phenpraphat, vice-president for marketing at Central Food Retail Co, the operator of Tops Supermarket chains, said the company began promoting the reduced use of plastic bags over the past decade.

In July of this year, the company started a campaign to stop providing plastic bags to shoppers on the third of every month at its 217 stores across the country.

"With this scheme, we can reduce the use of plastic bags by about 500,000 plastic bags on each day that it runs. Since July, as many as one million customers refused plastic bags from our stores," Ms Phattaraporn said.

The company has also provided a speedier Green Check Out counter, a line in which plastic bags are not is available for shoppers, since October this year.

It will continue to offer this service at Tops Superstore and Tops Daily stores next year. Moreover, it is considering offering biodegradable plastic bags to customers. 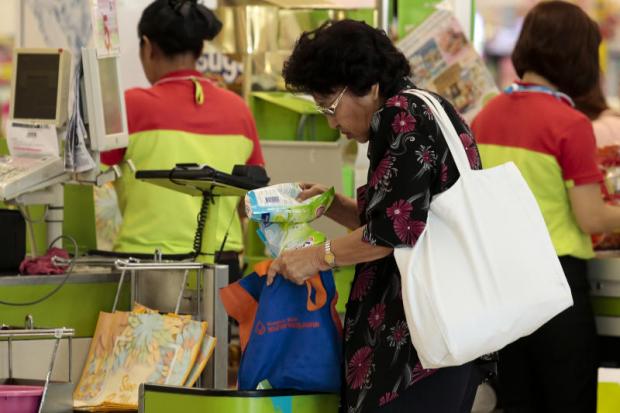 A Big C shopper puts purchased items into a cloth bag she brought along on Tuesday, the first of a promised 'no plastic bag days' on the 4th of every month..

Tops uses about 200 million plastic bags a year, but Ms Phattaraporn voiced confidence that the figure would decline sharply.

Voralak Tulaphorn, chief marketing officer at The Mall Group, said The Mall has been using Oxo biodegradable bags at its Home Fresh Mart chains for 10 years under The Mall Think Green project and also now uses shopping bags made of recycled paper at all its retail complexes.

The group uses about 100 million bags at its chain stores, of which 10% are biodegradable bags and 90% plastic. It also offers paper bags to clients.

"With the implementation of The Mall Think Green project, we can reduce the use of plastic bags by over 20%," Ms Voralak said.

Last year, it used 4 million less plastic bags and expects to save at least six million this year by adding more days where they are not provided as standard.

Surakit Arayarangsi, head of back of house operations at Robinson Plc, said the company is finding new methods to reduce the use of plastic products at its complexes across the country.

It will also expand the use of bags made from recycled plastics at all stores as well as ask vendors at its food courts to use biodegradable food containers.