Ships are loaded with containers at Laem Chabang port. The US-China trade war will likely cause heavy drag on Thai exports in 2019. (Facebook/IHS)

Thailand's exports are expected to drop by as much as US$4.42 billion (144 billion baht) next year if the ongoing trade war between the US and China intensifies, according to the latest study by the University of the Thai Chamber of Commerce.

According to Mr Aat, next year's forecast takes into account only the negative impact of the trade war, excluding other factors such as oil prices, foreign exchange and other risks. 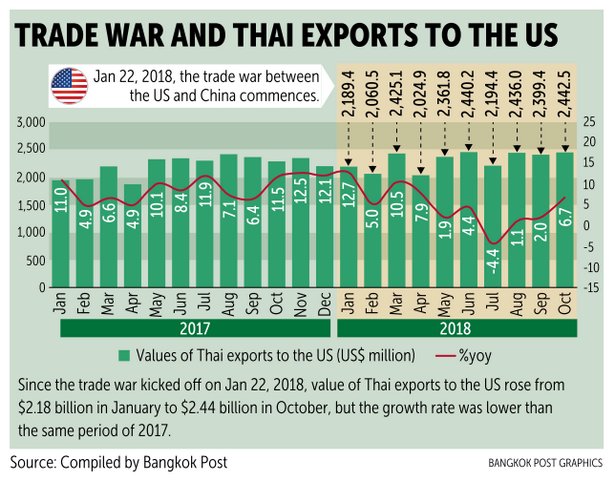 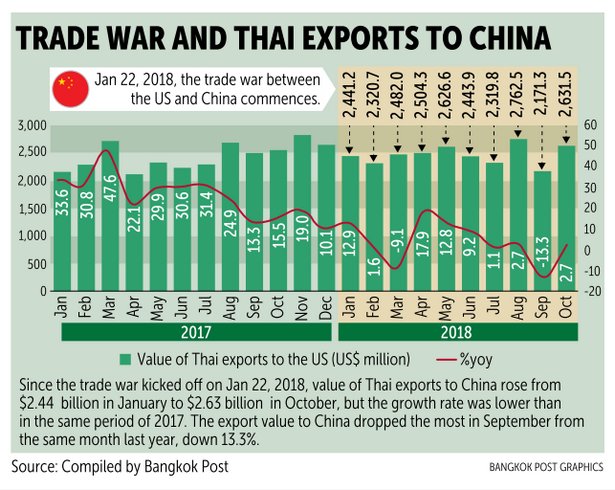 The value of Thai exports is forecast to fall by as much as $5.62 billion if the last scenario eventuates.

Exports to China expected to fall next year include computers and electronics, chemicals, rubber and plastics, wood and wooden products, farm products, food, beverages, and tobacco.

Goods bound for the US market to be hit hard by higher tariffs include computers and electronics, rubber and plastics, textiles, leatherwear and shoes, electric appliances, and machines and parts.

"Next year we expect the trade war will result in a decrease in Chinese exports to the US by $18.97 billion to $86.56 billion, while US shipments to China are expected to drop by $6.87 billion to 18.05 billion," Mr Aat said. "The trade war is forecast to shave 0.1-0.5% off global GDP growth, which China will be the most affected by, followed by the US, the EU, Japan and South Korea."

Mr Aat said goods from China and the US such as electric appliances, steel, cars, plastics and chemical products are also expected to flood into Thailand.

Thailand, meanwhile, will be given the opportunity to export more products to China and the US to replace products that are subject to higher tariffs from the two countries. Promising segments include electric appliances, rubber, wood, plastics, processed food, and automotive and parts.

"Thai small and medium-sized entrepreneurs, in particular, should be careful and prepare for the influx of Chinese goods to Thailand, especially electric appliances and steel products," Mr Aat said. "Goods from China will be exported more to Asean markets, first to Vietnam, which shares a border with China, followed by Singapore, Malaysia and Thailand."

He said foreign direct investment from China is also expected to surge in Thailand and Asean.