Thailand recorded rice shipments exceeding 11 million tonnes in 2018, as targeted by the government. 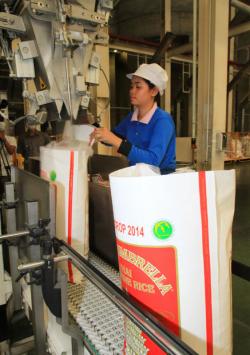 A worker fills a bag at a rice processing plant in Ayutthaya province. TAWATCHAI KEMGUMNERD

"The Thai rice market has returned to normal after the government disposed of hefty rice stocks that were pressuring rice prices for years," he said.

Of the total, 12.2 million tonnes was edible-grade rice for human consumption, with the remainder inedible or low-quality grains.

Over the last few years, the government spent 1.8 billion baht a month, or about 60 million baht a day, for warehouses to store state rice stocks.

The department held the final auction for a combined 267,300 tonnes of rice for animal feed and energy use in late August, selling the entirety.

Since the government took control in 2014, the Foreign Trade Department has organised 32 rice auctions and sold 25,000 tonnes of rice stocks under G2G contracts to Indonesia's State Logistics Agency. In total, the department sold 16.91 million tonnes worth 146.17 billion baht.

The government is estimated to have incurred a loss of at least 500 billion baht from the costly populist programme.

Mr Adul predicted Thai rice exports to stay at 10 million tonnes this year, but prices are likely to become much higher.

The department set a target to ship rice under G2G deals of 1 million tonnes this year.

Mr Adul said responsible authorities aim to promote premium rice across the world this year, such as coloured and speciality rices, organic, hom mali fragrant, and Kor Khor 43 rice, which is recommended for diabetics because of low sugar levels.

He said Thailand will also promote rice exports in Asia, the Middle East, Europe, the US and Canada.

"Despite lower figures compared with the past two years, overall Thai rice export prospects in 2019 remain promising thanks to the quality and credibility of Thai rice among traders," Mr Adul said.

He warned a stronger baht will cause Thai rice to become more expensive than competitors' grains.