The healthy fight over medical prices

On Dec 27, the Commerce Ministry announced plans to put medical-related fees, including drugs, supplies and service charges, on the price control list. 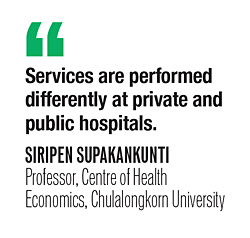 After listing this category as under price control, a subcommittee will convene to decide reasonable rates for services and establish price ceilings.

The Commerce Ministry needs to hold more discussions with all stakeholders to ensure that the measures, once put in place, will be fair to all parties -- consumers and private hospitals, said Commerce Minister Sontirat Sontijirawong.

"No one knows what price we should charge for public and private services because we don't know the actual cost of each healthcare product," she said.

The government will have to find a way to audit each hospital to find the exact cost to the hospital for each procedure in order to calculate a price ceiling, Prof Siripen said.

Should medical care be under price controls?

Private hospitals have higher medical prices for drugs and services because each hospital has to allocate a huge investment sum for advanced medical devices to meet a requirement under the act, Dr Pongpat said.

Under the act, each hospital has to hire and provide a minimum number of medical staff.

All public hospitals are not subject to staff number rules, as they are under a network of state agency administrations from the Public Health Ministry and the Thai Red Cross Society, which means operating costs vary greatly between public and private hospitals.

Kalin Sarasin, chairman of the Thai Chamber of Commerce, said the government should not step in to regulate the prices of medical supplies and services.

In principle, the government should allow private hospitals to run their businesses freely, Mr Kalin said.

"The chamber sees an imperative to liberalise the private hospital business, as many private hospitals made massive investments in expensive state-of-the-art medical equipment such as CT scanners," he said.

Mr Kalin suggested that state officials exercise existing mechanisms through the Trade Competition Commission to supervise fair competition and the Public Health Ministry to regulate the quality of medical services and treatment.

This liberal approach to healthcare price controls is not endorsed by consumer representatives and academics.

While medicines have been on the price control list years, supervision is limited to prohibition to sell beyond the sticker price, said Saree Ong-somwang, secretary-general of the Foundation for Consumers.

In practice, private hospitals can charges any prices they want.

Since many private hospitals are listed on the Stock Exchange of Thailand, implementing price control on drugs and medical services may lead to share sell-offs by investors, further contributing to hospitals' woes, said Siripen Supakankunti, a professor at Chulalongkorn University's Centre for Health Economics.

Whether the price controls would apply only to Thais or foreigners as well has also not been made clear. 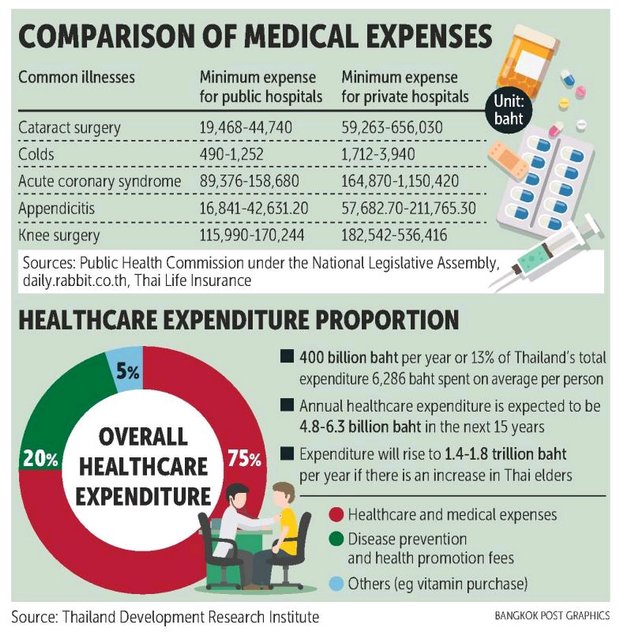 "I think the government needs to have some kind of policy to control large private hospitals, as they have been increasing prices and saying the money is going to investment and research, but it's not clear how much of it goes back to the shareholders," Prof Siripen said. "Private hospitals still have a responsibility to keep the country's national healthcare goals in mind and not just their own interests."

Is medical care in Thailand too expensive?

In Ms Saree's view, medical expenses in private hospitals are unreasonable and have been exaggerated.

"The prices of medicines in private hospitals are 70-400 times higher than those offered by public hospitals, let alone the charges of medical supplies and medical services," she said. "This is unfair to customers."

For example, a one-centimetre cut made by a fruit-cutting knife costs up to 60,821 baht for an operation.

Dr Pongpat argues that public hospitals can buy medical supplies, services and drugs from many companies with cheaper prices than large private hospitals because each purchase and order depends on a negotiation, and the state has greater negotiating power than private hospitals do.

Larger private hospitals can buy medical supplies at a cheaper price than smaller ones as well.

"All private hospital costs are based on actual costs from suppliers, and they have already been calculated to reflect business sentiments and equal other surrounding private hospitals," Dr Pongpat said.

Does the latest move contradict the policy to be a regional healthcare hub?

Apart from the allures of beautiful natural landscapes, exotic entertainment and renowned gastronomy, Thailand is leading Asia as a medical tourism destination.

There are over 1,000 hospitals in Thailand, of which over 470 are private facilities. The country takes pride in having the largest private hospital in Asia, as well as having the first Asian hospital to receive ISO 9001 certification and JCI accreditation.

To date, 37 hospitals in Thailand have been accredited by the JCI, all of them private, according to health-tourism.com.

The price controls will be a huge obstacle to the government's policy to promote Thailand as a regional medical hub, which it has been promoting for more than a decade, Dr Pongpat said.

Thailand's tourism and services sectors are dynamic and fast-growing industries, with 38 million tourist arrivals in 2018, and the medical sector should take this opportunity to become a regional hub, he said.

Some tourists are entering the country for medical treatment purposes, but they also want to travel across the country, Dr Pongpat said.

By contrast, consumer organisation groups are not supportive of the government's policy to promote Thailand as Asean's medical hub from the outset, given that medical personnel in Thailand are limited, Ms Saree said.

The policy is instead predicted to result in the brain drain of medical professionals, leading them to flee to the private sector, and medical expenses will increase significantly for no reason, she said.

Even with the policy to promote Thailand as a medical hub, medical services would be subject to regulation, Ms Saree said.

For example, Singapore has placed importance on being a medical hub, but there are still price controls regulating both public and private hospitals. Private hospital prices are only 2.5 times prices at public hospitals.

The announcement to put medical and healthcare expenses on the state price control list caused an uproar among private hospitals listed on the SET, with the share price of Bumrungrad Hospital plunging 8.6% on Jan 9.

Analysts have also downgraded the performance of SET-listed healthcare companies to neutral after the Commerce Ministry approved putting medical supplies and medical service charges on the price control list. 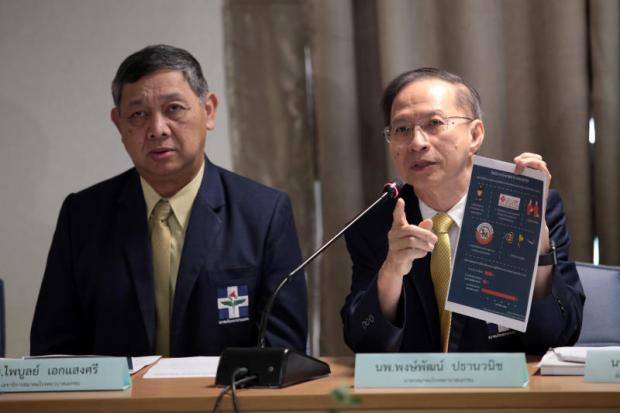 The price control policy will create a huge financial problem for private hospitals and impact the quality and standards of supplies, services and drugs, Dr Pongpat said.

As private hospitals operate independently, they have to seek new mergers and acquisitions, make partnerships to share technologies with others, or raise funds on the stock market because they need to control and manage operating costs and maintain competitiveness, he said.

But Ms Saree said the price controls and any regulations to cap medical services are unlikely to result in private hospital losses.

Private hospitals, with annual profit growth of 5-6%, have been found to be financially able to build new buildings, she said.

"The price controls on medicine, medical supplies and medical services may reduce their profits," she said, "but if we look at the operating results of the hospitals listed on the SET during the third quarter of 2018, some posted a net profit of as high as 33.7% year-on-year, which is incredibly high when compared with the performance of other businesses in the country."

Are there any win-win solutions?

Although it seems like a daunting task for all parties to come to a consensus, there might be a resolution that everyone can agree on.

Thanavath Phonvichai, vice-president for research at the University of the Thai Chamber of Commerce, said the private hospital business is considered a medical alternative, but it is important to ensure that such alternatives are not servitude and that people have the right to know the rates of medical treatment.

"Most importantly, state price controls have to ensure benefits to the country and consumers as a whole," Mr Thanavath said.

He suggested that the state price controls be first applied to certain medical services.

The Private Hospital Association is calling for the state to bring all public hospitals under the jurisdiction of the 1988 act.

The move will push all Thai hospitals into the same regulatory framework, requiring each to provide a minimum amount of physicians, paramedics and pharmacists, a costly regulation applied to private hospitals alone.