Digital payments on the rise
Business

Digital payments on the rise

The lines are down at the ATM and a lot fewer payments are by cheque any more. (File photos)

The country's adoption of digital payments has recorded significant progress, up 83% in 2018 from 2016, while fund transfers through traditional channels -- branches and ATMs -- sank by a double-digit percentage.

Fund transfers via traditional bank branches declined by 30% in 2018 from the preceding two years and those via ATMs dipped by 34% over the same period, said Bank of Thailand governor Veerathai Santiprabhob.

It was the first time that fund transfers via the ATM channel declined after rising 2-3% during 2016-17.

Cheque payments also fell by 6.6-6.7% per year over the past two years.

Digital payment transactions surged by 83% from 2016 to 5.87 billion last year, with an average 89 transactions per user per year.

Even though the average digital transactions per year per user increased significantly from 49 in 2016, it was far below Singapore's at 770.

Digital payment transactions have kept rising under the central bank's payment system roadmap, particularly implementation of PromptPay service that kicked off in early 2017. 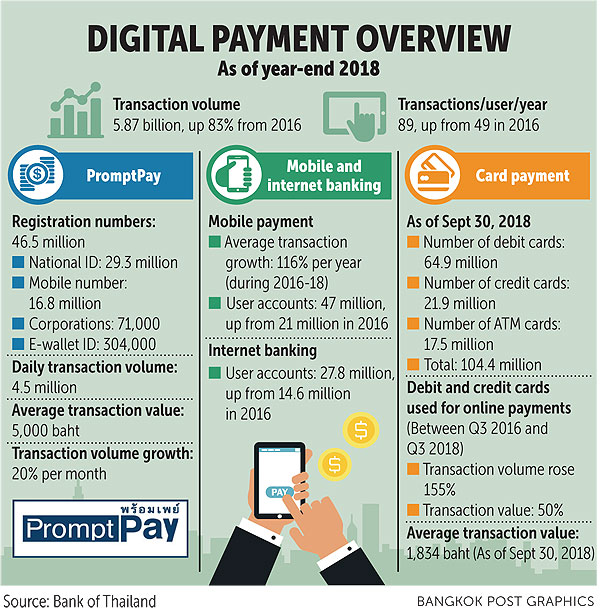 As of the end of 2018, PromptPay's registration numbers reached 46.5 million, of which 29.3 million signed up with their citizen ID card, 16.8 million by mobile phone numbers, 71,000 were registered by corporate firms and the remainder via e-wallet.

She said the central bank's fourth stage for its payment strategic plan, running from 2019-21, centres on developments in five areas to increase payment efficiency and security, lower costs, match demand, and help e-commerce and social commerce operators, as well as small and medium-sized enterprises and corporations.

She said the central bank would allow eight financial institutions testing digital ID in its regulatory sandbox to exit soon.

"The central bank needs accuracy on e-know your customer testing before allowing banks to exit from the sandbox," said Ms Siritida.

"The accuracy rate should be 99% to stabilise the system and build consumer confidence."

For digital lending, the central bank wants financial institutions to offer services digitally throughout the process.

The Thai-Sino high-speed rail project from Bangkok to Nakhon Ratchasima is tipped to go ahead as planned now that the design for one of its stations has been changed.

Not your routine conglomerate