Latex Systems focusing on own brands

Latex pillow and mattress manufacturer Latex Systems Plc plans to launch more of its own brands this year to tap the retail segment, aiming to raise funds in the Market for Alternative Investment (MAI) and targeting sales growth of 15% per year. 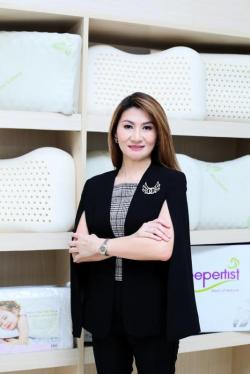 "Having our own brands can help diversify risk. They will be valuable company assets," she said. "Non-branded production, which is how we currently sell through wholesale, is not sustainable."

Nap & Night will be priced at 400-1,000 baht for pillows and 6,000-20,000 baht for mattresses. In the first two years after the brands are launched, the company wants sales volume from retail products to represent 10% of total sales, Mrs Pathumporn said.

The new brands will be launched in the middle of the year and introduced in retail stores and malls by the end of 2019, starting with TNF and Nap & Night.

Sleepertist will be introduced in showrooms that the company will spend a total of 50 million baht to construct in three locations, including Bangkok and key tourist destinations Pattaya and Phuket to tap Chinese buyers.

"Chinese demand is very strong," Mrs Pathumporn said. "It has driven our sales in 2016-18 with a leap growth in 2017, as Thai latex pillows and mattresses have been very popular and the world's number one."

The flagship showrooms will also be a distribution centre for the wholesaler in the region. Construction of the three showrooms will be completed in the third quarter of 2020 for an opening in the fourth quarter of that year.

"Our first brand, Latex System, was started in 2015 after one of our Chinese wholesalers requested a brand to market in China," said Mrs Pathumporn, the 41-year-old youngest daughter of Vorathep Wongsasuthikul, chief executive of Thai Rubber Latex Corporation Thailand Plc (TRUBB), an SET-listed producer of natural concentrated latex.

Non-branded sales rose to 643 million baht from 478 million baht, which accounted for 96% of total sales.

Mrs Pathumporn said the company plans to raise funds on the MAI this year.

Funds raised will be used to repay a loan from last year to acquire a latex pillow factory in Rayong from Thai Natural Foam Co with an investment of 243 million baht.

Latex Systems also plans to spend 133 million baht to expand a second production line that will start by the first quarter next year.

Its production capacity totals more than 60,000 mattresses and over 2 million pillows a year.

After an initial public offering, major shareholder TRUBB's shares in Latex Systems will decrease to 39.64% from the current 56.17%.

A stake of the second-largest shareholder, the Wongsasuthikul family, will decline to 13.53% from 19.17% at present.

The Energy Regulatory Commission (ERC) has resolved to maintain the fuel tariff (Ft) at an average of -0.1532 baht per kilowatt-hour (unit) to control monthly power bills this year as the global oil price is on an uptrend.

Google Crushed Many Digital Ad Rivals. But a Challenger Is Rising.