Exporters are quick to finger baht appreciation whenever shipments sag, but studies reveal that the global economy and demand from trading partners have a much larger effect

Despite some relief from de-escalating tensions over the Sino-US trade spat, continued export contraction and currency appreciation remain a double whammy for shipment-oriented Thailand, with exporters blaming the strengthening baht as a culprit for dismal numbers.

An abrupt currency appreciation can weaken the country's price competitiveness and reduce export revenue in baht terms, though it lowers import costs of raw materials and keeps consumer cost of living stable, especially when there is an increase in global energy prices.

Blaming foreign exchange movements for lower outbound shipment value is a regular knee-jerk response in Thailand whenever exports contract or grow at a slower pace.

Thailand is an export-oriented economy, with shipments accounting for around 70% of GDP. The country mainly exports manufactured goods, comprising 86% of total shipments, with electronics, machinery and equipment, and foodstuffs among the most important products.

As an economy dependent on exports, Thailand felt the tremors when the US announced punitive tariffs on Chinese imports as an attempt to "make America great again". 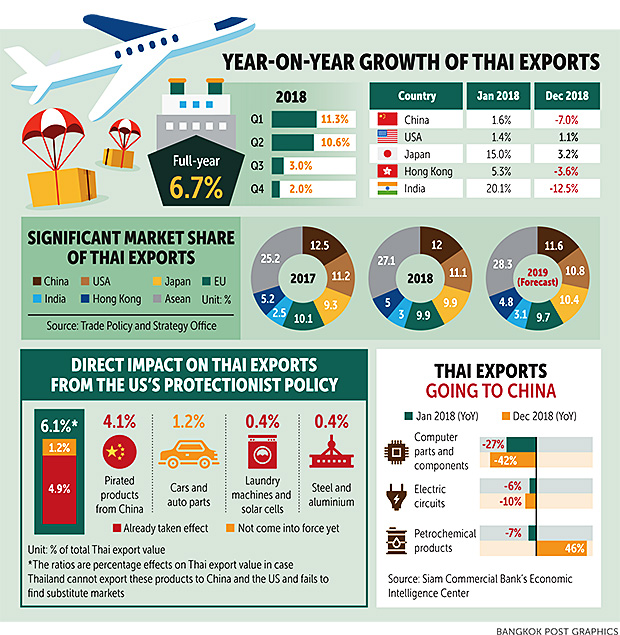 US President Donald Trump had originally warned he would escalate the tariffs he has imposed on US$200 billion worth of Chinese imports from 10% to 25% if the two sides failed to reach a deal by March 2.

But there was a sudden change of tone as he raised the possibility of extending that deadline if negotiators were nearing an agreement.

Previous tariffs the US imposed on Chinese imports worth $250 billion had an indirect effect on Thai shipments, reflected in a contraction of computers, equipment and components exports to China of 17.1% year-on-year from July to November 2018.

After expanding positively throughout most of 2018, customs-cleared exports fell for a third straight month in January, contracting by 5.7% year-on-year.

Exports to other markets shrank, especially those closely related to Chinese supply chains such as Hong Kong and Taiwan. Furthermore, exports of numerous products to China dropped in response to China's trade slowdown.

Aat Pisanwanich, director of the Center for International Trade Studies at the University of the Thai Chamber of Commerce (UTCC), said Thailand's exports are expected to see the lowest growth in three years because of the Sino-US trade row, a global economic slowdown and the strengthening baht.

The UTCC's latest study puts export growth this year at 4.4% to $263 billion (8.24 trillion baht), the lowest rate in three years.

The estimates for this year assume the baht averages 32 to the US dollar, with global GDP growth of 3.5%, Dubai crude oil prices of $60 per barrel, no further tariff restrictions between China and the US, and a marginal impact from Brexit.

Brexit uncertainty and China's lower imports stemming from trade disputes have a greater effect on Thai exports than the baht's value, he said.

"Even if the baht's value depreciates by 10%, trading partners will not buy our products, as there has been a hiccup in imports because of protectionist trade policy," Mr Jitipol said.

The global economy and demand from Thailand's trading partners have had a larger impact on outbound shipments than the strengthening baht, with exports in January contracting at a faster pace than the baht's gain, said Somprawin Manprasert, executive vice-president of Bank of Ayudhya.

The baht rose nearly 3.5% against the US dollar in January from the end of last year, while the country's customs-cleared merchandise shipments shrank 5.7% year-on-year.

"Other regional currencies have also appreciated, but the baht's gain is at a faster pace," Mr Somprawin said.

He referred to a Bank of Thailand study on elasticity of exports and foreign exchange movement, suggesting that trading partners' economies have a greater effect on Thai exports than the baht's value. 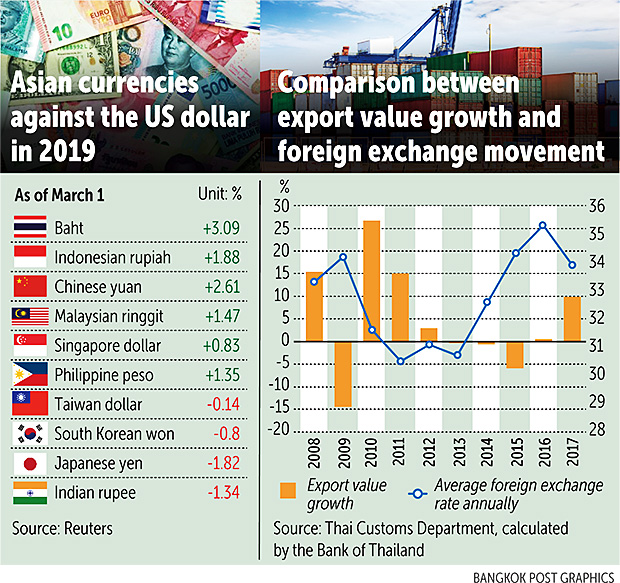 The study found that the correlation between the baht's real effective exchange rate (REER) and export volume has subsided in recent years as Thailand's participation in the global value chain has reduced exchange rate effects on export volume, while local businesses have moved to enhance value-added products, sharpening their competitive edge. Local currencies are also increasingly used for trade settlement.

According to the Bank of Thailand's monetary policy report published in June 2018, estimated results on the relationship between export volume and the baht's REER between 2008 and 2017 showed that the appreciation of REER reduced export volume in line with theories. Yet the elasticity of exports to exchange rate movements was lower over time, suggesting a weaker link between the REER and export volume.

A 1% appreciation of the REER in the past would reduce export volume by 0.6%.

"However, elasticity has decreased to around 0.3% and becomes statistically insignificant during the past two years [2016-17]," the report said. "Moreover, exchange rates have much less impact on export volume than income-related factors."

Regarding the relationship between exchange rates and export prices, a 1% strengthening of the baht against the US dollar is found to increase export prices in US dollar terms by only 0.3% on average. 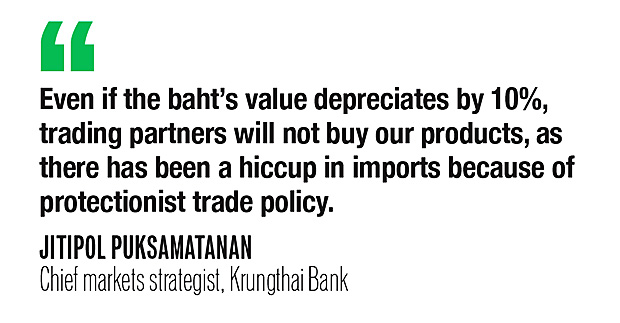 "This result suggests limited ability to pass on costs of baht appreciation to export prices in order to maintain revenue in baht terms," the report said.

The dollar's retreat against major global currencies is the main cause of currency appreciation among several Asian nations, while tourism income, which is a factor pushing up Thailand's current account surplus, makes the baht gain at a faster pace than other regional currencies, Mr Somprawin said.

As a representative of the manufacturing sector, Supant Mongkolsuthree, chairman of the Federation of Thai Industries, said business operators are concerned about the strengthening baht putting pressure on the country's trade competitiveness.

"We fear that currency appreciation could reach 30 baht to the dollar from an average of 31 now," he said. "If the baht gains more without any relief measures, it will affect the competitiveness of Thai exporters and tourism operators."

Although the US has shelved its plan to increase import duties on Chinese goods from 10% to 25% on March 1, not many positive signs in the way of robust export growth are on the horizon this year.

"Thailand's exports in 2019 will face downside risk factors, including a slowdown in global demand, low commodity prices because of oversupply, the baht's appreciation and ongoing trade disputes," said Pimchanok Vonkorpon, director-general of the Trade Policy and Strategy Office.

The export contraction is expected to extend into February and persist through the first quarter, given prevalent external risks and a high-base effect, said Don Nakornthab, senior director of the economic and policy department at the Bank of Thailand.

In December, the central bank slashed its forecast for payment-based 2019 export growth to 3.8% from 4.3% predicted in September and lowered its economic growth forecast for the year to 4% from 4.2%.

The central bank's Monetary Policy Committee is scheduled to review its economic growth forecast at the upcoming meeting on March 20.

Siam Commercial Bank's Economic Intelligence Center (EIC) is even more pessimistic. The research house forecasts this year's exports to expand by 3.4%, far below the full-year expansion of 6.7% in 2018.

Slower global trade, pressure from falling crude prices and uncertainty about the Sino-US trade spat are factors keeping a lid on higher shipment growth, according to the EIC.

Despite numerous headwinds, Kasikorn Research Center (K-Research) is maintaining its export growth forecast for 2019 of 4.5%, within a range of 2-6%.

Though it projected a 4-8% year-on-year contraction in the first quarter because of a high-base effect in last year's corresponding period, export growth is expected to pick up during the final three quarters, partly because US-China trade tensions have shown signs of improvement, according to K-Research.

"This may help ease the impacts of the trade war somewhat, though close attention must be paid to the sluggish Chinese and euro-zone economies, as well as low commodity prices, because they will likely affect Thai export performance over the long term," the think tank said.