The Vega, built in 1892 in Norway, is seen off Phangnga, Thailand. (Photos courtesy of Sailvega.com)

The Boxing Day tsunami in 2004 took a terrible toll across South and Southeast Asia, with an estimated 230,000 people killed in 14 countries. In Thailand, the hardest hit area was in Khao Lak in Phangnga where some 4,000 people lost their lives when the wall of water overwhelmed them.

But there was one group of people whose names have never appeared on missing persons' lists. Their names may never appear on any official lists because they do not "belong" anywhere.

They are the stateless and stranded people on remote islands that remain beyond the reach of governments even if they are officially part of a country. These are the people that American captain Shane Granger and his German wife Meggi Macoun have been sailing 11,000 kilometres each year to serve, delivering donated educational and medical supplies for the past 14 years.

When the waves came in 2004, Mr Granger and Ms Macoun were in Langkawi in northern Malaysia, around 40 kilometres across the Strait of Malacca from Satun province in southern Thailand. Captain Shane and his partner in life have been travelling together ever since they met in Tanzania "a long time ago", he says. 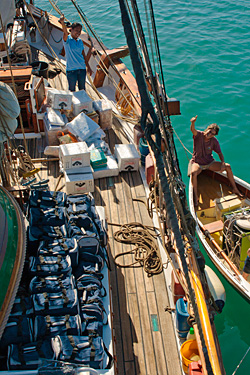 Volunteers offload supplies from the Vega for the Bairo Pite free clinic in East Timor.

Now they are living in Southeast Asia aboard an ancient wooden sailing boat with their cat named Scourge -- as in Scourge of the Seven Seas, the name given to the notorious English pirate Edward Teach, better known as Blackbeard.

Their humanitarian efforts keep them at sea for more than seven months of every year, carrying out a mission that started with a simple request.

"When the tsunami hit, some of our friends in the Chinese business community in Langkawi came to us and said they wanted to send some donated supplies to Pulau Weh in the north of Sumatra but they didn't have any way to get them there. So we said, 'Sure, we'll do it,'" Captain Shane recalled in a telephone interview with Asia Focus.

"With a cargo licence and the Vega, we have a large capacity and we loaded about 28,000 tonnes of foods and medical supplies along with a doctor and two nurses on board.

"She was pretty packed and she was down right to her waterline but we figured that there were people that needed help and we could do it, so we got on with it."

The Historic Vessel Vega is an 80-foot-long wooden craft that weighs more than 34 tonnes. Built in Norway in 1892, it was one of the toughest ships of its time and is still going strong. Mr Granger came across it when a friend told him there was a beautiful wooden boat just sitting at a dock in the Canary Islands off Spain back in 2001.

After he persuaded the previous owner to sell him the boat, Mr Granger and Ms Macoun sailed it to Cape Town, crossing the Indian Ocean through cyclones, before they arrived in Langkawi in 2003. From there, they worked with the United Nations on global and regional communication campaigns before their humanitarian missions to remote islands in Indonesia began three years later.

With supplies donated from friends across the online community, the Vega has been providing aid to more than 100,000 out-of-reach and stateless people every year.

"The year after the tsunami, we were down to two bags of medical supplies and four boxes of stationery, but now we are now averaging about 20 tonnes of new educational and medical supplies every year," Mr Granger noted. 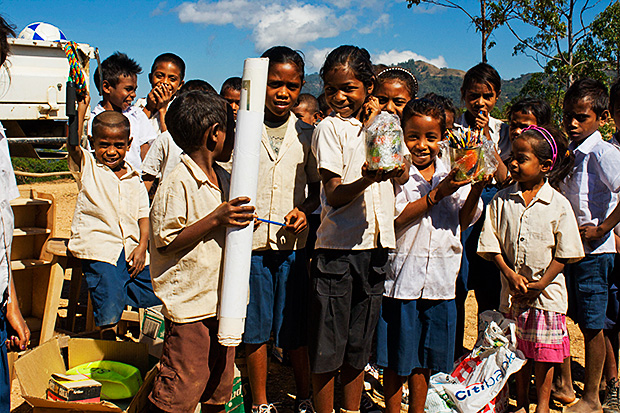 Many schools in East Timor, such as this one in Ermera, lack electricity or running water.

The medical supplies ferried by the Vega to remote locations range from pulse oximeters, foetal heartbeat monitors and autoclaves to basic clinic tables, surgical implements, syringes, bandages and crutches. Midwife kits containing everything needed to successfully deliver and care for a baby include a year's supply of sutures, bandages, masks, gloves and natal clamps.

"We work with the same 18 small islands every year, and with East Timor," said Mr Granger. "A lot of these small islands that we have worked with, when we leave, they will not see another outside face until we come back the next year."

Officially, many of these islands are designated as uninhabited but people have been living on them for hundreds of years without any interference from the Indonesian government. But that does not mean they do not need support from the outside world, noted Mr Granger.

"Their schools have nothing and their midwives have nothing but they are more or less right in the heart of Indonesia," he observed. "Every year we sail off from Langkawi and we do about 7,000 miles in a big circle to deliver these donations."

One of the beneficiaries of the Vega's visits is the Asulau Village School in East Timor, a community-run school that receives no support from the government. If not for community schools like this, children in remote villages have little or no chance to obtain an education, Mr Granger believes.

However, he was quick to add that the Vega has a very good relationship with maritime officials in Timor-Leste and has also received some support from ministers in the current Indonesian government. But 90% of the supplies the ship carries still come directly from private donations. 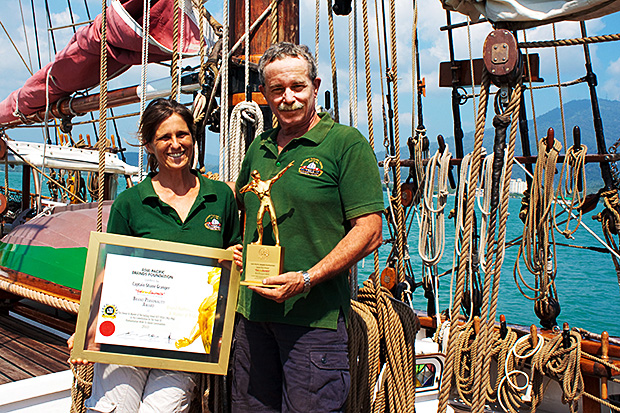 "The donations came from our friends who just want to help other people but do not want to see their little bit of help being misused," he said. "When people make a donation they like to know that those donations actually go to help someone in the end."

That message is reinforced on the Vega website, Sailvega.com: "If you're looking for a fancy organisation with big offices then forget us. If what you want is to help others and be sure your help actually gets into the hands of people who need it, then read on."

Mr Granger and Ms Macoun ask each remote island community to provide them with a list of what social workers need to do their jobs every year. They then post the requests online where philanthropists and others can respond.

Some voyages include medical volunteers, such as Dr Ruth Indira who joined the Vega in 2012 to provide free training to traditional midwives and health workers. Free clinics have been held on islands without official public health service, such as Pulau Nila, a volcanic island in the Maluku chain in the Banda Sea. 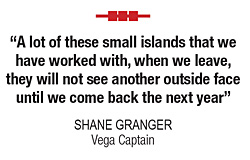 Apart from medical and educational supplies, the Vega also helps create jobs in remote villages. Volunteers have helped to set up vocational training centres and provided necessary tools such as an entire metal workshop for the Bakhita Vocational Training Center in East Timor.

The Vega is currently docked in Satun where it is undergoing maintenance, and the couple are now looking to crowdfund their way back to sea within three months.

Luckily, Mr Granger and Ms Macoun have over 130,000 friends and followers on Facebook who share their desire to help those neglected by their governments or stateless since birth.

"They are living on islands that are too small for the government to reach," said Mr Granger. "If they want to have an ID, they will have to make it to one of the bigger islands and that is a journey that most of them cannot afford or are unwilling to make.

"They are simply forgotten and isolated."

But they are certainly not alone. The UN estimates that more than 10 million people are stateless globally, compared with official figures of 3.5 million, over 40% of them in Asia. For people on the 18 islands served by the Vega, Mr Granger and Ms Macoun and their supporters offer a vital lifeline, but clearly more such help is needed worldwide.