New technologies are making it easier for even the smallest businesses to bring innovative ideas to life and scale up quickly. By Tanyatorn Tongwaranan in Melbourne, Australia

A few years ago, digital transformation in business was seen as an option or perhaps an expensive investment that might be hard to justify. Even when companies did decide to digitise, the process was often fragmented, which prevented them from truly harnessing the power of technology. The approach appeared ineffective and the results were not quantifiable.

Today, however, it is clear that companies and businesses of all sizes must be able to capitalise on technology to overcome challenges, unlock new growth opportunities and scale up rapidly and efficiently.

In Asia Pacific where small and medium enterprises (SMEs) are the lifeline of the economy, their success in digitising their business models will be critical to overall socio-economic growth. SMEs make up 98% of all enterprises and employ about 60% of the workforce in the region.

Improved connectivity and smartphone penetration has put SMEs in a strong position to capitalise on the digital economy. The research firm IDC suggested that by 2021, over 60% of the gross domestic product in Asia Pacific will come from digitally enhanced products and services across all industries.

This phenomenon in part reflects a shift in values that is creating discontinuity in the economy. The world is moving toward a shared economy, asset optimisation and on-demand experiences, affecting how we consume, live, work, interact and transact.

"We are hearing about disruption and we can see how old norms and business models are being disrupted every day by technology," said Miyuki Suzuki, the president for Asia Pacific, Japan and China of Cisco, the US technology group. 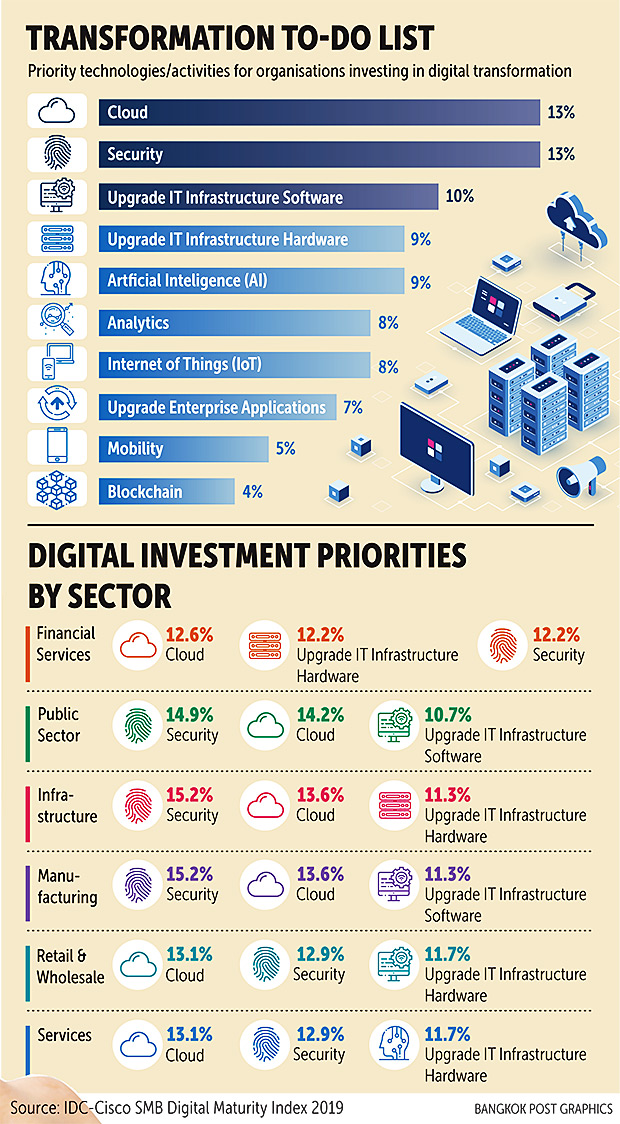 "However, if you peel that layer off, what you see underneath is discontinuity that is caused by fundamental shifts in people's values."

She used the example of the home-sharing app Airbnb, which has transformed the face of hospitality and property rentals. Because of the change in values, we now allow strangers to sleep in our bed, eat in our kitchen and use our utensils. This discontinuity has created a disruption in which 2.2 million homes opened up to some 19 million users in 34,000 cities, she said.

Irving Tan, senior vice-president and chief of operations at Cisco, said that with half of the world's 7.5 billion people now connected, the pace of innovation, digitisation and transformation would continue to accelerate.

"If you look at how much money from venture capital has been going into digital technologies, it shows you where innovation is going to happen," he said.

Last year, VC investments in digital technologies worldwide rose 21% to US$207 billion, but growth in Asia was more modest at 11%.

"But digitisation is way beyond taking manual processes to automation," said Mr Tan. "To me, it's really twofold: how it will enable all of us to deliver different experiences for customers and employees, and how it will enable us to disrupt or transform our own business model."

Ms Suzuki said that while discontinuity can be daunting, it also comes with great opportunities. "I see it as an opportunity to move forward, to create something new, reimagine our communities and create grassroots innovations that change organisations," she said.

"I see [discontinuity] as an opportunity to move forward, to create something new, reimagine our communities and create grassroots innovations that change organisations" — MIYUKI SUZUKI, President for Asia Pacific, Japan and China, Cisco

Some of the boldest step changes are taking place in Asia Pacific, particularly because in a lot of the emerging markets, there is no legacy to hold people back, she said.

"Emerging countries in Asia are not going to be left behind for long. While there has to be certain amount of IT literacy, young people seem able to develop that easily on their own."

In her view, developing regions will catch up very fast. Some advanced economies, however, may have a vested interest in the existing infrastructure, have people with an entrenched way of doing business who look only for return on investment.

"I think they are going to find it harder than the countries that don't have already have the infrastructure," she said.

Bidhan Roy, regional director and general manager for SMEs and distribution in Asean with Cisco, added that in a youthful region such as Asean where half the 630 million inhabitants are aged under 30, there is a great opportunity to pioneer new digital services.

"The region can leapfrog to the forefront of the fast-moving digital economy, especially advanced mobile financial services and e-commerce," he said.

"Digital investments will be significantly higher in areas such as cybersecurity, data analytics and in getting SMEs digital-ready through the power of technology."

TECH AS A GROWTH ENGINE

A positive trend in Asia Pacific is that 60% of SMEs have started to embrace digitisation, fearing that they will be left behind if they don't.

"Digital transformation is no longer just a vision for businesses. It is the reality," said Bastiaan Toeset, vice-president, commercial, for Asia Pacific and Japan with Cisco.

"SMEs are looking to harness the power of technology to overcome key challenges, unlock new avenues of growth and scale rapidly when required," he said.

The Asean digital economy currently generates approximately $150 billion in revenues per year, said Mr Roy, adding that several e-commerce unicorns have already emerged from the region, among them Lazada, Grab and Garena in Singapore, and VNG in Vietnam.

"The region should strive to strengthen the business case for investment in digital infrastructure, revisit regulations for key sectors and boost the local digital ecosystem," he said. This will enable SMEs to be early adopters of new Industry 4.0 technologies, business processes and models.

In addition, he recommends that SMEs come together on a common platform to drive increased innovation. Participating in knowledge sharing and capacity building will help deepen their understanding of the digital economy.

Mark Phibbs, vice-president for marketing with Cisco in Asia Pacific, Japan and Greater China, added that the advances in areas such as 5G, artificial intelligence and multi-cloud environments were having an enormous impact on business and society.

Technology allows small businesses to disrupt entire industries, he said. "We have seen them creating new answers to solve the world's biggest problems."

In Australia, an innovative approach to helping homeless people has emerged through collaboration between Orange Sky and Cisco. Orange Sky is a charity started in 2014 to provide free laundry service for homeless people.

Starting with an old van and a few washing machines, the company has now grown nationwide and washes 6 tonnes of laundry every week. It employs 20 full-time staff, operates 16 laundry vans, three shower vans and one hybrid van, with more than 1,000 volunteers.

Its mission has evolved from improving hygiene to providing reliable WiFi connectivity for homeless people to help them connect with the world. This required a secure, simple and flexible IT infrastructure.

"Having slow internet and poor tools for collaboration was hindering our growth, and it was frustrating for everyone. Cisco hasn't just helped us innovate and scale, they're helping us change the world," said Orange Sky co-founder Lucas Patchett.

Another example is Jara, a handheld learning device that can be charged off the grid with a crank and solar power.

Last year, Jara won first runner-up in the Cisco Global Problem Solvers challenge, winning $75,000, which helped it take the business to the next level. This year, at Cisco Live Melbourne, it also won the Grand Prize of $20,000.

"Cisco has given us a truly phenomenal platform for sharing our mission and journey," said Soraya Fouladi, the founder and CEO of Jara. "Beyond these prizes, Cisco ensures we have opportunities to participate in events where Jara's mission, of educating the 262 million out-of-school children and the one billion children in poverty, can be spread across the world."

While most SMEs in the region have embraced digitisation, completing the journey can be problematic. The most common hurdles are a lack of digital skills and talent, lack of insights into operational and customer data, and lack of a robust IT platform to enable the transformation.

"Challenges that came up clearly include the lack of skills, not just from an IT standpoint, but attracting and retaining talent is definitely one of the top things on the minds of SMEs," said Mr Roy.

"Technological change carries implications for all workers over the next decade. Asean is facing a reskilling challenge. A majority will be required to familiarise themselves with new devices and software applications. Many will even be required to fundamentally change the nature of their jobs."

Naveen Menon, president for Southeast Asia of Cisco, said cybersecurity was another area where SMEs are making a lot of investments, as so much data must now be stored and shared online.

"This opens up a whole series of potential risks. It presents challenges as data is going everywhere. I worry about my privacy and personal data," he said.

"There has to be an increase in transparency, accountability and empowerment and a legal framework to allow people to make right choices and hold people accountable."

Companies need to operate within the legal framework of a country and be able to provide whatever level of transparency their users want, he explained.

For accountability, if users feel that their data have been compromised, they should feel that they could hold someone or something accountable.

"There are many cases where people feel the sense of disengagement. They don't feel like they have access to the company or institution that's doing this to them," he said.

"When we consider that, our efforts are about engaging with the government and consumers about cybersecurity, educating and making everybody aware that being safe online is critical and goes hand in hand with the continued development of connectivity," he said.