EA to initiate its largest wind power farm this year

The first two units, with a combined power capacity of 90MW, had CODs in late January, while the third unit with 48MW commenced COD last Friday, said Mr Amorn.

"All three wind power units sell output to the state grid through power purchase agreements with the Electricity Generating Authority of Thailand," he said.

"The remaining 122MW from two units will begin operation later this year."

EA has operational solar and wind power projects with a combined capacity of 542MW. 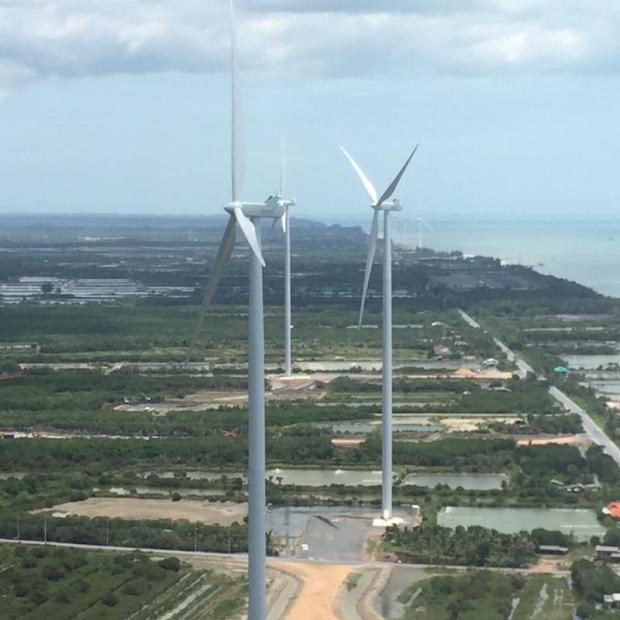 One of Energy Absolute's wind power farms in Nakhon Sri Thammarat. The company plans to reach installed capacity of 664MW by 2019.

Today, EA subsidiary Mine Mobility Research Co will introduce its first EV, Mine SPA1, at the Bangkok International Motor Show, which is available for bookings.

EA will carry out R&D for Mine Mobility cars and boats, and plans to hire a local assembler to make its EVs.

Mr Amorn said EA will allocate 1.5 billion baht for its new electrified boats and cars, expected to be available in the local market in the fourth quarter.

Mine Mobility Research will be related to EA's energy storage facility, located in Chachoengsao, with an investment of 4 billion baht.

EA entered into a joint venture with Taiwan's Amita Technologies to develop 50 gigawatt-hour (GWh) lithium-ion batteries for this project.

The first phase will have a capacity of 1GWh and commence commercial operations in the second half of 2019. This phase will generate power.

The second phase has a capacity of 49GWh and is scheduled to commence commercial operations in 2021, producing components to be installed in EVs.

For the company's oleochemical industry, EA plans to develop higher-value biodiesel products, including bio-hydrogenated diesel and phase change materials, with a budget of 2 billion baht.