The lure of the distant
Business

The lure of the distant

An estimated 11m Thais will travel overseas this year. (Photo by Chanat Katanya)

Air pollution, hot weather and the stronger baht are leading more Thais to travel abroad this year, notably during the upcoming Songkran holiday.

While Thailand is set to welcome more than 40 million international tourists this year, some 11 million Thais are expected to spend time abroad. The number of Thais travelling overseas is growing every year, from less than 4 million a decade ago to 10.2 million in 2018, the Tourism and Sports Ministry reports.

Outbound tourism has expanded at a rate of 7-8% over the past five years and is likely to grow by at least 8.5% this year to 11 million people who will spend 330 billion baht on their trips. Some 25% of these tourists travel in group tours, largely provided by hundreds of tour operators in Thailand.

For the first quarter of this year, an average of 1 million Thais travelled abroad each month, Mr Charoen said, and the number is expected to grow because of long holidays and school breaks.

"The current hot weather and the haze that prevailed in several tourism provinces were other conditions for people to make overseas trips," he said.

The haze that engulfed parts of Chiang Mai and Chiang Rai provinces has become critical in recent weeks, heightening concerns among local hoteliers over whether the situation will improve before the Songkran holiday this coming weekend.

"Normally, locals are familiar with bush fires and crop burnings for replantation, but this year such activities have escalated since last month with no sign of stopping," said La-iad Bungsrithong, president of the Thai Hotels Association's northern chapter.

Bookings for hotels in the provinces, which also include Mae Hong Son, for the coming holiday are low, and the situation could significantly affect the hotel industry in the North, which has about 60,000 rooms of hotels, resorts, apartments and units on the Airbnb platform. 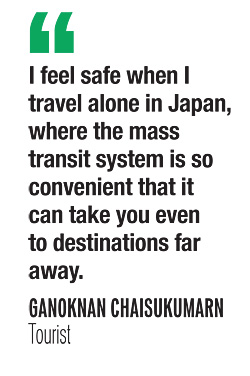 The haze in several key tourism destinations has somewhat lessened their popularity, considering the low bookings this month.

Recent booking data from Agoda showed that Thai travellers preferred spending Songkran overseas. The data revealed that Tokyo, Osaka, Seoul and Taipei were among the top 10 destinations to celebrate the long holiday.

Bangkok had been the first choice for the past few years, but this year Tokyo overtook the capital.

The association found that about 30,000 Thais will travel overseas, mainly to Japan and Europe, during the holiday, spending about 900 million baht.

Boosted by the baht

The baht has appreciated against the US dollar by over 4% since the start of the year, outperforming other regional currencies. Last week the baht rose to 31.70/79 to the dollar.

If the baht rises continually throughout the year, it will spur further outbound travel as the operating costs of travel agencies will drop by about 10%, enabling them to offer cheap tour packages, Mr Charoen said.

Together with stiff competition, many tour agencies are offering attractive deals at 25,000 to 35,000 baht for a three- or four-day packaged tour to Tokyo or Osaka. A trip to the Czech Republic, Hungary and Austria for seven days and four nights starts at 34,000 baht a person. 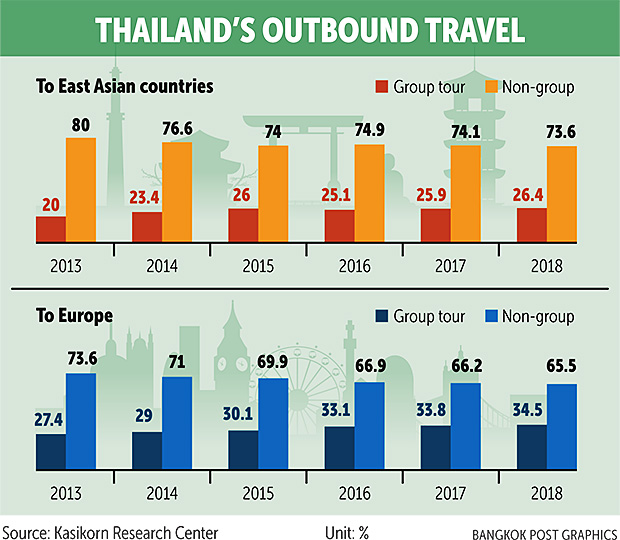 But some tourism operators, especially those managing inbound travel, are unhappy with the strong baht because foreign arrivals have to pay more while travelling here.

Association of Thai Travel agents (Atta), whose members are inbound travel agencies, reported a decline in foreign arrivals that used the services of its members to 1.53 million in the first quarter this year, compared with 1.68 million in the same period last year.

Association of Thai Travel agents president Vichit Prakobkosol said that given the current stiff competition, it's difficult for operators to mark up the prices of package tours to match the rising baht and they have to manage business efficiently to avoid incurring losses.

For the 10 million Thais who went abroad last year, next-door Malaysia and Laos remained the two most popular countries.

Besides these neighbouring countries, more Thai travellers are interested in exotic destinations outside the region: Japan has become the top destination, followed by countries in Eastern Europe and China, according to a survey by the Thai Travel Agents Association. 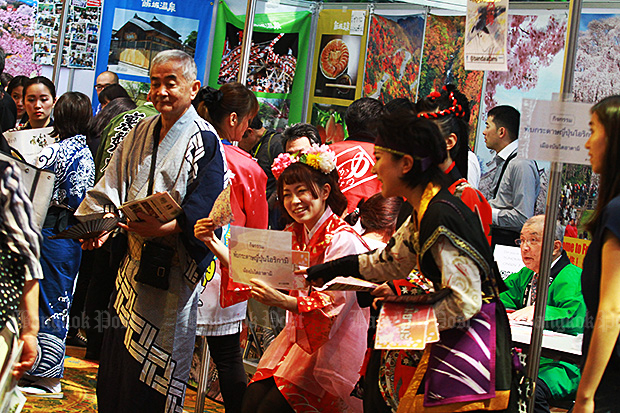 Travel agency staff promote tourism in Japan at a fair in Bangkok. (Photo by Somchai Poomlard)

A study by Kasikorn Research Centre found that Japan remains the top destination, with 1.24 million Thais visiting the country this year, up 14.7% from 1.13 million last year.

Japan has seen a significant rise in Thai visitors since 2013, when the country waived tourist visas for Thais. Similarly, the number of Thai tourists visiting Taiwan and South Korea has increased after visa exemptions.

More direct flights, attractive tour packages and the promotion of secondary cities has made Japan the most popular destination for outbound travel among Thais in recent years.

The Japan National Tourism Organisation confirms that the number of Thai arrivals has been increasing, notably repeat visitors and those on trips to secondary cities. The number of visitors travelling on their own continues to grow, reaching 72% during the past six months. Meanwhile, repeat visitors have also grown noticeably, particularly to second-tier cities in Japan.

"I feel safe when I travel alone in Japan, where the mass transit system is so convenient that it can take you even to destinations far away," she said.

According to Kasikorn Research Centre, Thais travelling on their own outnumber those travelling with organised group tours. The non-group travellers accounted for 72% of total outbound travellers in 2018 and 72.8% in 2017.

But the study showed a rising number of tourists travelling with group tours, thanks to competition among travel companies resulting in affordable tour packages. The growing group tour market includes Japan, Vietnam and South Korea, plus destinations in Europe such as Austria, Belgium, the Netherlands, Italy, Spain and countries in Eastern Europe.

Despite Thai FITs representing several generations, most them are Generation X and millennials who prefer arranging trips themselves and who rely heavily on OTAs (online travel agencies) to set up itineraries and book tourism services with an eye towards the best deals. They tend to opt for trips with outdoor activities and cultural and historical tourism.

Sakolwan Pumyong, 24, said she prefers travelling on her own to countries not far from Thailand to experience the local culture and history at reasonable cost. Laos and Myanmar are still her favourites, though she visited these countries before when she was a university student.

For Hatsamon Kittipongvorakarn, visiting countries in Europe is a great experience. Germany is her favourite because of its polite people and rich cuisine relative to other European countries.

"Most importantly, it has plenty of great historical architectural sites for me to take photos," she said.