The Revenue Department plans to reinstate a tax break for tourism spending in second-tier provinces to prevent the economy from losing momentum amid growing risks from both the global economic slowdown and local political uncertainty. 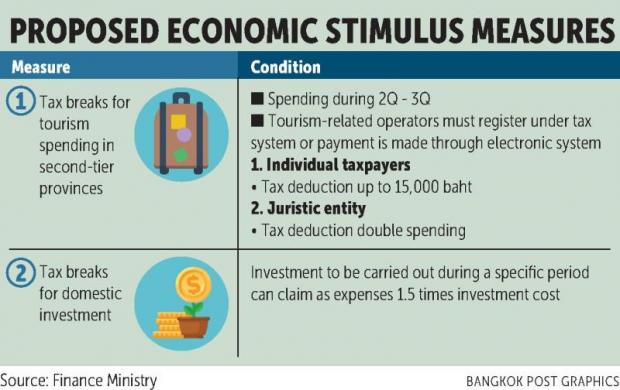 The period to claim a personal income tax refund for tourism spending will run from the second to the third quarter this year, briefer than in 2018, which lasted all year, said Ekniti Nitithanprapas, director-general of the department.

The second and third quarters are typically low season for tourism, so the stimulus is needed during this period, he said.

The tax deduction for travelling in 55 second-tier provinces will remain unchanged at 15,000 baht per taxpayer, said Mr Ekniti. Eligible spending includes accommodation, food and travel agents who are in the tax system or electronic channels that can be used to claim tax refunds.

The tax break for tourism spending in second-tier provinces is expected to boost tourism in these less popular provinces and help money trickle into low-income earners' hands, he said.

Tourism operators recently requested the government extend the tax deduction for tourism spending in second-tier provinces after it lapsed at the end of 2018.

According to last year's scheme, local residents who spend on accommodation, food and tour guide services in second-tier provinces were eligible to a tax deduction of 15,000 baht, while juristic persons could use expenses from training and related tourism activities in these secondary provinces to deduct two times their spending.

A source at the Finance Ministry who requested anonymity said Deputy Prime Minister Somkid Jatusripitsak is scheduled to meet today with high-ranking ministry officials to discuss stimulus measures amid the likelihood of a political vacuum, as the obstacles to the new government forming are undermining consumer and investor confidence.

The ministry's duty is to handle the economy during the transition period to the new government, the source said.

The economy is losing steam, dented by a trade spat between the world's top two economies, which is dealing a blow to global economic growth as well as local political uncertainties. Many privately-owned research houses and policymakers have cut their economic growth forecast this year to 3.8-3.9% and those with a more pessimistic view have downgraded their estimates to below 3.5%.

Another source at the ministry said a deduction for private sector investment expenses from corporate income tax, expected to be 1.5 times, could also be proposed as a stimulus. The measure will be implemented for a short period, the source said, without specifying a time frame.

The government cannot launch stimulus measures during the transition period to the new administration, the source said.