According to a recent survey carried out by the EEC Office, the demand for labourers across the EEC -- which will include at least 10 targeted S-Curve industries -- will exceed 475,000 people in the next five years.

The 10 targeted industries are next-generation automobiles; smart electronics; high-end medical tourism; agriculture and biotechnology; food for the future; robotics and artificial intelligence (AI); aerospace engineering; biofuels and biochemicals, as well as the digitisation of data for research purposes, or data mining.

Based on the EEC Office's estimates, while 60% of the estimated 475,000 positions that will be available by 2023 can be filled by low-skilled but qualified vocational workers, the remaining 40% of the positions that will need to be filled require high-skilled labourers with at least a bachelor's or postgraduate degree. 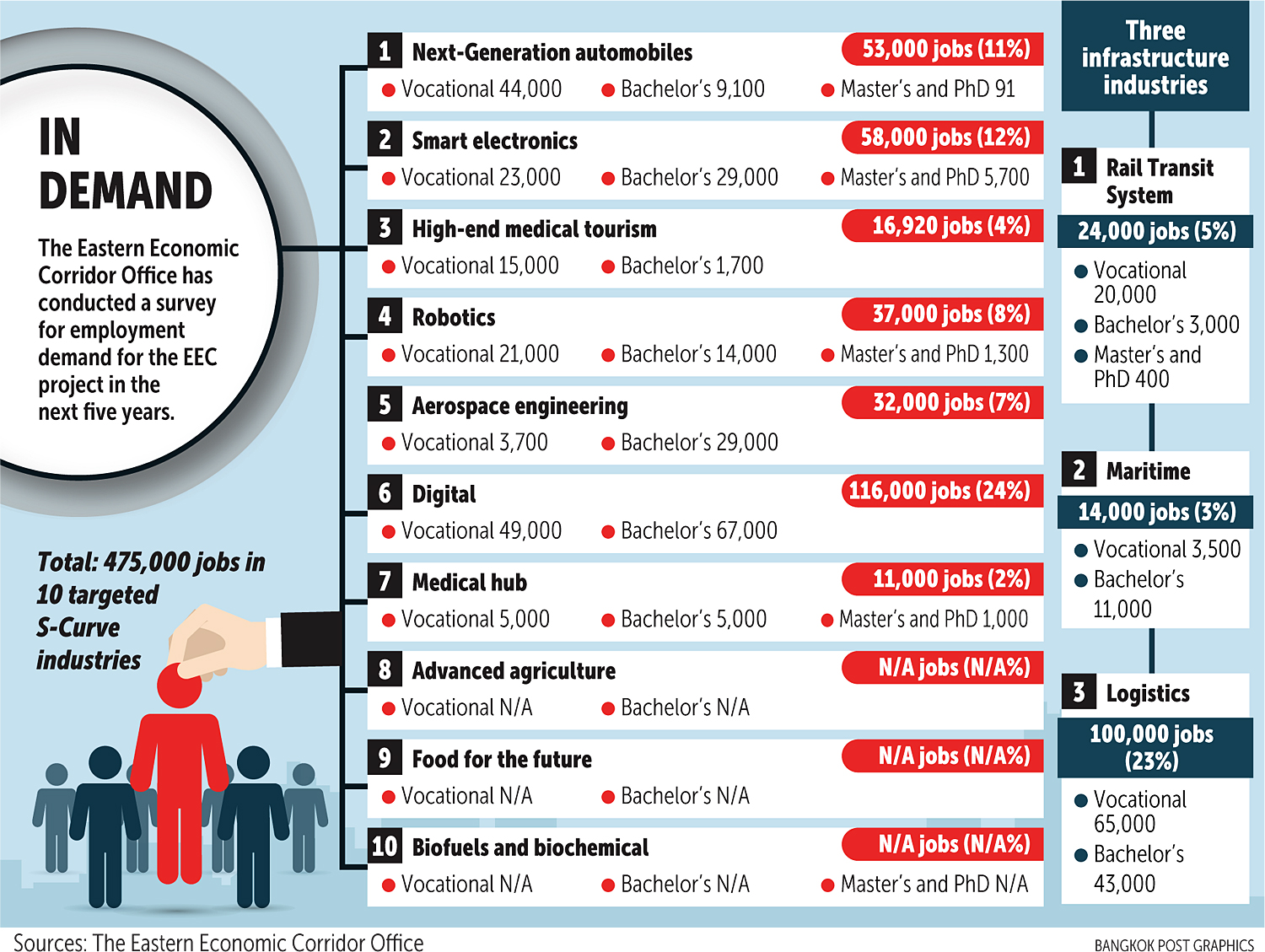 These highly-skilled workers will primarily be needed in the data mining sector, as well as the next-generation automobile and AI sectors.

The survey not only came up with an estimate, but it also came with a dire warning about the severe shortage of highly-skilled labourers in Thailand.

The report estimated that the data mining sector alone needs to train as many as 116,000 new workers each year to continue operating and expanding, while the next-generation automobiles and AI sectors need 58,000 and 53,000 new workers annually to keep up with demand.

"More investors in the EEC are adopting modern technologies, which require a certain level of know-how to operate," said Apichart Thongyou, the chairman of the EEC's Human Resource Development Centre (EECHDC).

"The problem is that vocational colleges and universities in the vicinity of the EEC can only supply about 30% of the demand for skilled workers."

To help address the problem, the EEC Office set up the EECHDC last year and assigned it to come up with strategies to produce more skilled labourers to meet the demand across the three provinces.

"Our job is to act as an intermediary among all stakeholders -- state agencies, educational institutions and private companies," he said.

"We identify the skills required by the industry and work with vocational institutions to create a curriculum that matches the demand of the industry, both in terms of skills and numbers."

The EECHDC has come up with two projects that were primarily geared to meet the demand for skilled workers across the EEC. The first project, targeting vocational students, is aimed at promoting a new method of vocational education and to increase participation from the private sector, he said.

The project, dubbed the "Sattahip model", after the success of Sattahip Vocational College in Chon Buri's Sattahip district -- where schools actively work with the government and private firms to implement work-integrated learning -- has been implemented at 40 vocational colleges in the region.

"About 50% of the time, studies at these colleges take place in a real work environment under a teacher or expert supervision," he said.

The scheme is also designed to appeal to students with a GPA of 2.5 or higher from low-income families who want to study at vocational colleges, he said.

The second project, which is targeted at more affluent students, is aimed at producing skilled workers for the positions within the S-curve industrial sectors which require further specialisation, such as automation and robotics, medical research and digitisation, he said.

Mr Apichart said the programme is offered by 11 participating universities that cover a wide variety of degrees.

"Burapha University, for example, which was chosen for its strategic location, offers a range of courses and degrees that span from automotive design and electrical engineering to food sciences," he said.

Both projects were designed to churn out as many skilled graduates in the shortest amount of time, added Mr Apichart.

Mr Apichart said an urgent overhaul of the entire education system is needed so Thailand will not experience a skilled-labour shortage.

"The most important of which is how to change the way parents see vocational education as a future option for their children," he said.

To this date, Mr Apichart said, most Thai parents still look down on vocational education and many even referred to them as "3D" -- dirty, difficult and dangerous.

"However, the situation has improved a lot in recent years as more students and parents realise that the most in-demand skills in the 21st-century global market are technical skills," he said.

Another problem that needs to be addressed, said Mr Apichart, relates to the changing demographics of the country.

"Thailand is an ageing society -- and enrolments are expected to decline sharply by 2040," he said.

"We need to come up with ideas to keep children in school -- especially now there are fewer and fewer enrolments as parents are having fewer children."

Mr Apichart said that Thailand could also make use of its senior citizens by retraining so they are able to work in the modern workplace environment and make use of any specialist skills that they may have.