The World Bank cut its Thai economic growth forecast for 2019 to 3.5% from 3.8% and plans to review the economic outlook again after the new cabinet line-up is announced. Apichart Jinakul

Caught in the crossfire between a trade spat of the world's superpowers and marred by lacklustre confidence at home, Thailand's economy faces an uphill task to resuscitate growth in the second half.

Although the stock market has been performing well after Gen Prayut Chan-o-cha retained his premiership in last week's parliamentary vote, the main drivers of economic growth are signalling weakness.

High household debt and low farm prices have kept a lid on private consumption, while private investment has been nothing but dust in the wind as confidence remains shrouded by political uncertainty and the slow progress of public investment projects. 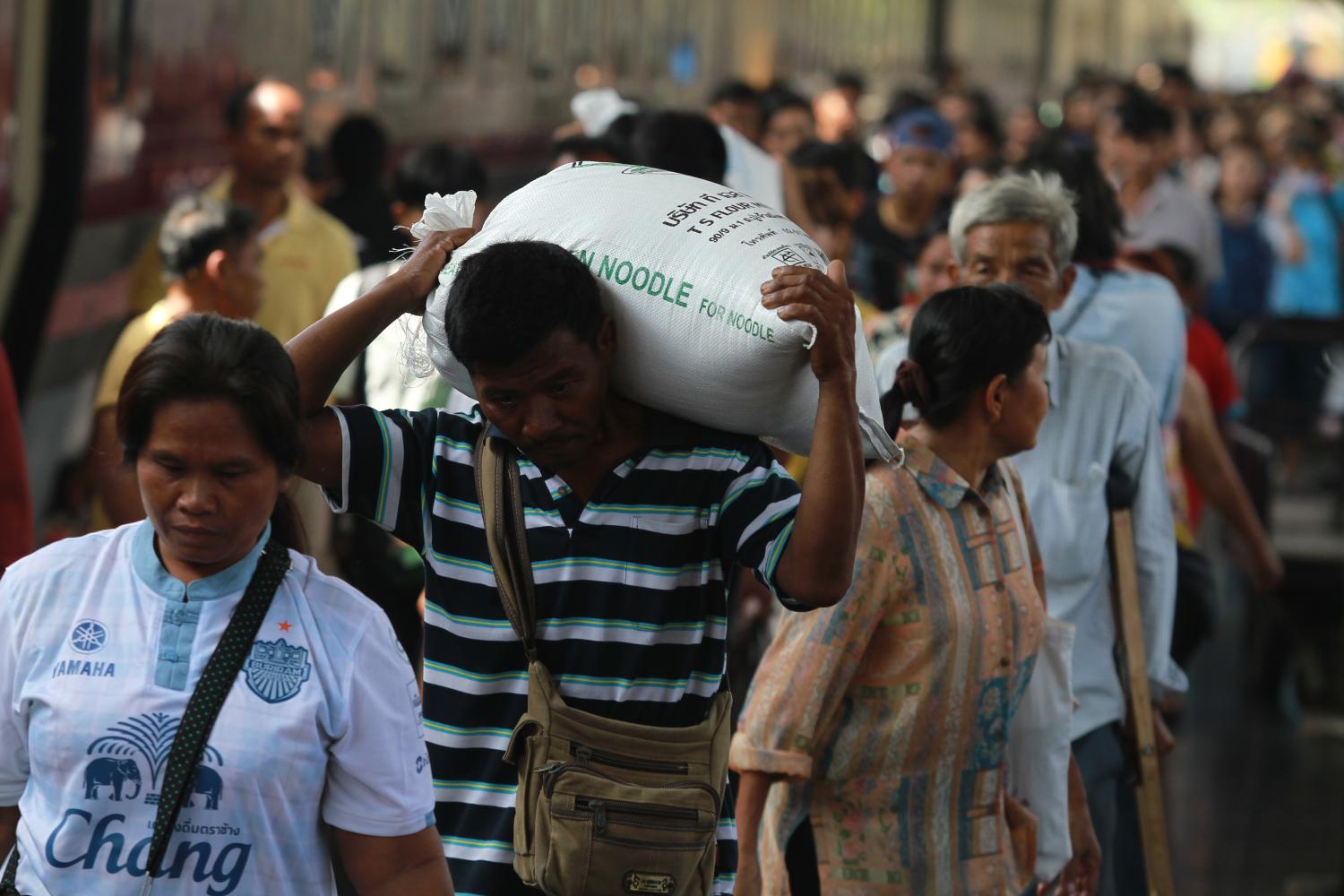 People arrive back at Bangkok's Hua Lamphong station after visiting the provinces for a long holiday. SOMCHAI POOMLARD

As a reflection of this reality check, the World Bank cut its Thai economic growth forecast for 2019 to 3.5% from 3.8% and plans to review the economic outlook again after the new cabinet line-up is announced.

Thailand's political risk is higher than at any time in the past five years, with Future Forward Party leader and premier hopeful Thanathorn Juangroongruangkit losing by just seven votes in the House of Representatives, said Pornthep Jubhandhu, senior vice-president of SCB Asset Management.

Heightened political risk could be an obstacle for the new government in passing new laws and approving the next fiscal budget, Mr Pornthep said.

The embattled farm sector is expected to remain in the doldrums in the second half of the year amid weak demand from the global economic slowdown.

"The slowing global economy will accordingly lower prices of agricultural products in the second half," said Aat Pisanwanich, director of the Center for International Trade Studies at the University of the Thai Chamber of Commerce.

Rice, rubber and tapioca in particular are likely to experience not only price pressures, but also higher competition. 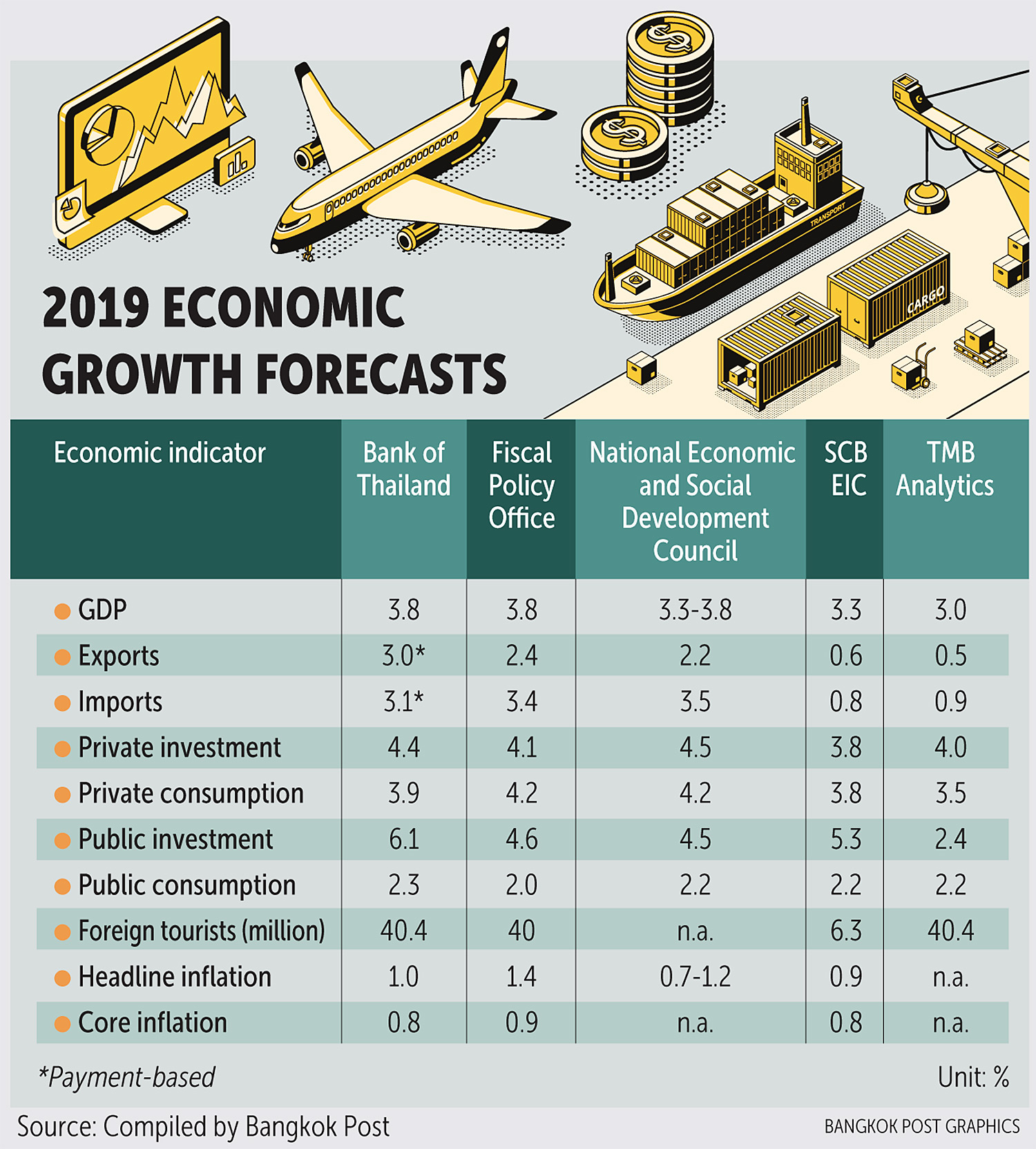 Rice is seeing more competitors, as China is set to become a major rice exporter, while rubber, which is used as raw material to make tyres in both China and the US, will feel the pinch from the heightened trade row and weak global demand, Mr Aat said.

Mr Aat proposed that Thailand expand into new markets such as the Middle East, India and secondary cities in China to boost export volume in the second half.

Most Thai fruits have been promoted in traditional markets such as Guangzhou, Shanghai, Beijing, and Nanning. Such promotion should be extended to other cities like Jiangsu and Nanjing, Mr Aat said.

Thailand should also ramp up selling fruits through the online platform or social media to boost fruit exports and help shore up prices, he said, adding that the government must closely supervise product quality to prevent the image of Thai fruits being tarnished.

Banjongjitt Angsusingh, director-general of the International Trade Promotion Department, said the department is adjusting the export promotion plan by allocating the leftover budget in the first half to spend on marketing and export promotion activities in the second half, especially in India, the US and China -- places where demand remains strong.

The European market is in poorer shape because of the impact of the Brexit impasse, she said.

Promising export goods in the second half include agricultural produce and processed agricultural goods, as well as lifestyle goods necessary for daily use, Ms Banjongjitt said.

She specified electronics, electric appliances, and automobiles and parts as segments that need close observation.

Thailand's automotive sector is suffering from external factors such as the US-China trade war and widespread non-tariff barriers among Asean nations.

Adding to the pain are concerns from car makers and components manufacturers about Thailand's post-election political stability. 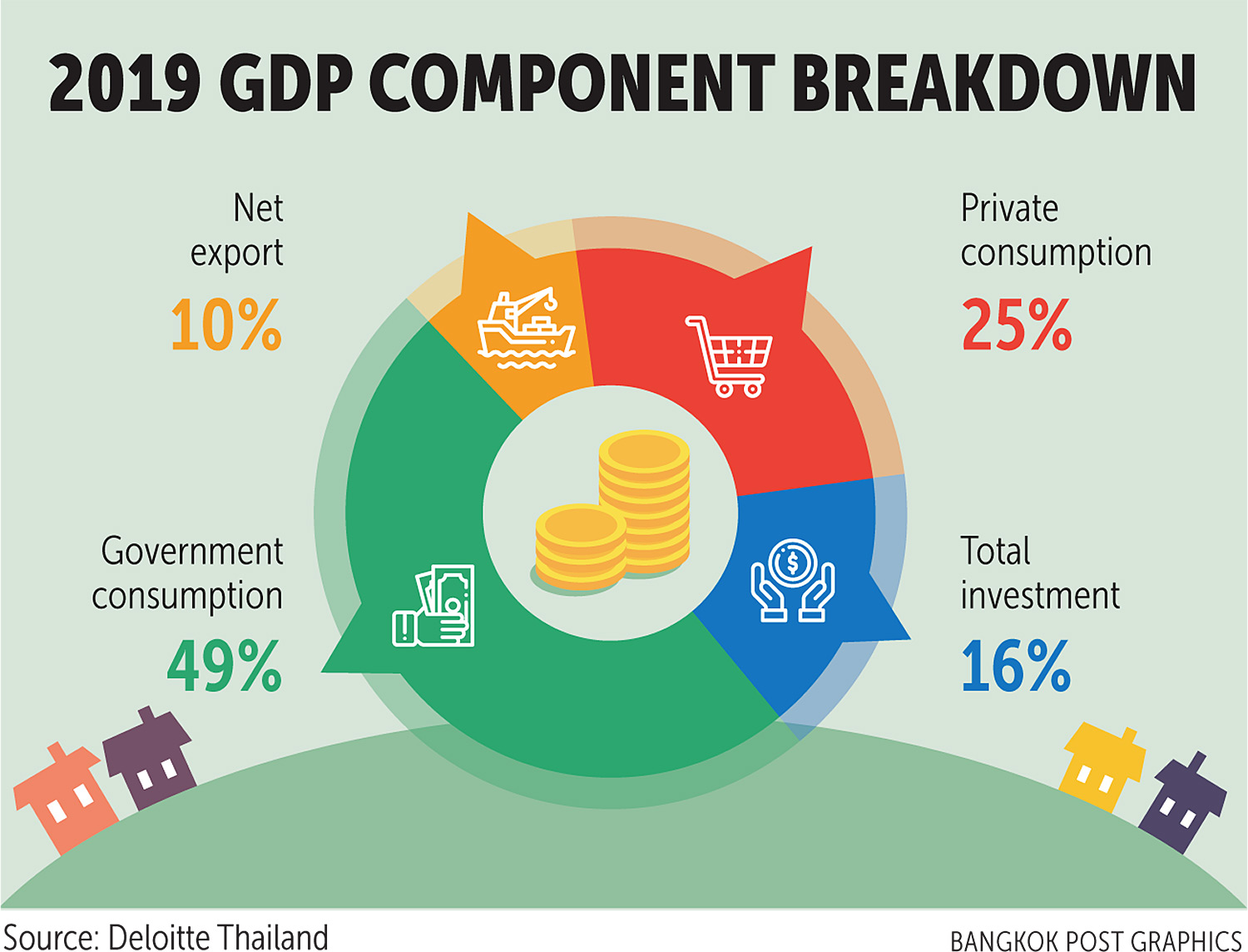 "Car exports for the whole year seem likely to contract as the Federation of Thai Industries (FTI) projected earlier, so the second half of 2019 will be a tough period for automakers," Mrs Achana said. "Although auto parts shipments have seen flat growth so far, the association expects that the trade war and non-tariff barriers will induce a decline of export value in the remaining months of 2019."

Mrs Achana pointed to Vietnam as an example of a country taking serious action on non-tariff barriers to Thai-made auto products.

In early 2018, Vietnam launched inspection measures at its ports for cars and auto parts entering the country.

"Vietnam's measures will result in automakers and parts manufacturers having to relocate their operations to Vietnam in order to handle this situation," Mrs Achana said. "Thailand's auto export value in the next couple of years will lose some value in Southeast Asia, as many auto-producing countries are trying to beat Thailand instead of making a partnership together."

At home, the association is worried about whether the new government can keep political opposition at bay without damaging the economy.

"Thai auto exports have yet to perform very well, while internal sentiment seems to be unpredictable," Mrs Achana said. "All those factors could pressure Thailand's economic outlook in 2019. Moreover, the volatile movement of the baht is another factor that has many exporters very worried."

Thailand is expected to face a drought situation, and this natural disaster will put pressure on prices of farm products and household incomes among Thai farmers, he said.

"The club is calling for the new government to speed up new signings of free-trade agreements with major trading destinations, such as Europe and North America, in order to keep up Thailand's competitiveness in auto exports and support new investment in this industry in the near future," Mr Surapong said.

Tourism, an important cog in Thailand's economic engine, may be one of the few sectors to withstand the blow from the US-China trade dispute.

While several reports have said that the number of Chinese visitors to the US has been falling since the spat arose last year, Thai tourism authorities are pinning hopes on travellers from the mainland turning to Asia, with Thailand as one of their favoured destinations.

"So far, we have seen no impact from the intense trade spat and the tourism sector is anticipated to continue expanding throughout the second quarter as expected," said Tanes Petsuwan, deputy governor for marketing communications at the Tourism Authority of Thailand (TAT).

Conflicts between the two economic giants led to a drop in the number of Chinese tourists in the US in 2018, the first decline in 15 years after more than a decade of rapid growth.

Inbound Chinese tourist arrivals to the US fell by 5.7% year-on-year to 2.9 million last year, AP reported, citing the trade war as one of the reasons for the slowdown.

"Rather than a threat, we see the situation as an opportunity for Thai tourism to draw more visitors from the mainland," Mr Tanes said.

The TAT's five Chinese offices, in Beijing, Chengdu, Shanghai, Guangzhou and Kunming, have been ordered to outline measures and marketing plans to steer more Chinese to Thailand.

Of the more than 38 million international tourists who visited Thailand last year, some 10.5 million were Chinese. Receipts from overseas and domestic tourism reached 3 trillion baht, contributing 18% to the country's GDP.

Mr Tanes said a headwind that could affect tourism in the second half is a slowdown in the European market. Brexit jitters could reduce Europeans' likelihood of travelling abroad.

"However, this can be substituted with the growth of Asean markets and some niche markets such as sporting events, driving the tourism sector to stay healthy all the way through year-end," Mr Tanes said.

The agency has outlined several activities to promote tourism during the second half, including the promotion of MotoGP 2019, an international motorcycle race at Buriram International Circuit in October.

The TAT forecasts tourism revenue this year to reach 3.4 trillion baht, of which 2.24 trillion will derive from international markets.

The research house is maintaining its bad-loan ratio estimate of 2.96-2.97% at year-end 2019, but it will take into account the new cabinet portfolio and economic policies before making a decision as to whether to revise the figure.

Commercial banks' NPL ratio inched up to 2.94% at the end of March from 2.93% at the end of 2018, due to re-entry NPLs, particularly from small and medium-sized enterprises (SMEs).

"Re-entry of vintage SME NPLs is the key concern," Ms Thanyalak said. "These loans failed to turn to performing loans, though they have been restructured several times. Economic conditions and structural problems are blamed for the re-entry."

Naris Sathapholdeja, head of TMB Analytics, predicts that commercial banks' NPLs will increase to 487 billion baht at the end of 2019 from 450 billion baht now.

The NPL amount is expected to rise 9% in 2019, far above the country's likely economic growth of 3%.

Mr Naris said 240 billion baht or 53% of the 450 billion baht in bad loans consists of SME borrowing. With digital disruption and booming e-commerce, sales of traditional business operators are hurting.

For retail loans, mortgages contributed the highest NPL ratio at 3.3% as of March, compared with auto hire-purchase loans at 1.7%, credit cards at 2.7% and personal loans at 2.6%.

But Mr Naris holds an optimistic view that the NPL ratio will decline to 2.86% at year-end from 2.94% now because of a larger loan portfolio.

With the central bank's new loan-to-value curbs for housing loans and close monitoring of auto loans, the NPL ratio of the overall banking sector should remain under control, he said.