A young drone imaging startup is looking to unlock the secret of how to predict crop yields solely from a series of multi-spectral aerial images.

Sky Visual Imaging Venture (SkyVIV) hopes to expand the agriculture side of its business, and doing this means figuring out the correlation between drone images taken at various wavelengths and crop yields.

The startup is working with professors from Thailand and the Netherlands along with outside data scientists to determine the correlation, which if found first could lead to a huge windfall of new customers and profits for SkyVIV.

Vivatvong Vichit-Vadakan, chief executive of SkyVIV, said his company has almost three years of data to work with from taking images of sweetcorn crops in partnership with Sunsweet Public Company.

Drone images can detect weak spots in crops by analysing how green each area of the field is. The less green, the more poorly the crop is doing. SkyVIV can also detect abnormalities like disease, weeds and fungus, and provide farmers with information on how much fertiliser to use in specific areas.

The most useful information is crop yields, which is still befuddling data scientists and agricultural drone companies.

"I think we have a head start because we have collected so much data and are ahead of the competition," Mr Vivatvong said. "If we could patent it into an IP (intellectual property) it could end up being very valuable."

He gave the example of a factory that turns corn into animal feed. The factory owner gets delivered an inconsistent amount of corn each day because farmers are unaware of the yield of crops available to harvest. When the factory gets too much corn, some of it goes to waste, while getting too little means the factory will not operate at full capacity. 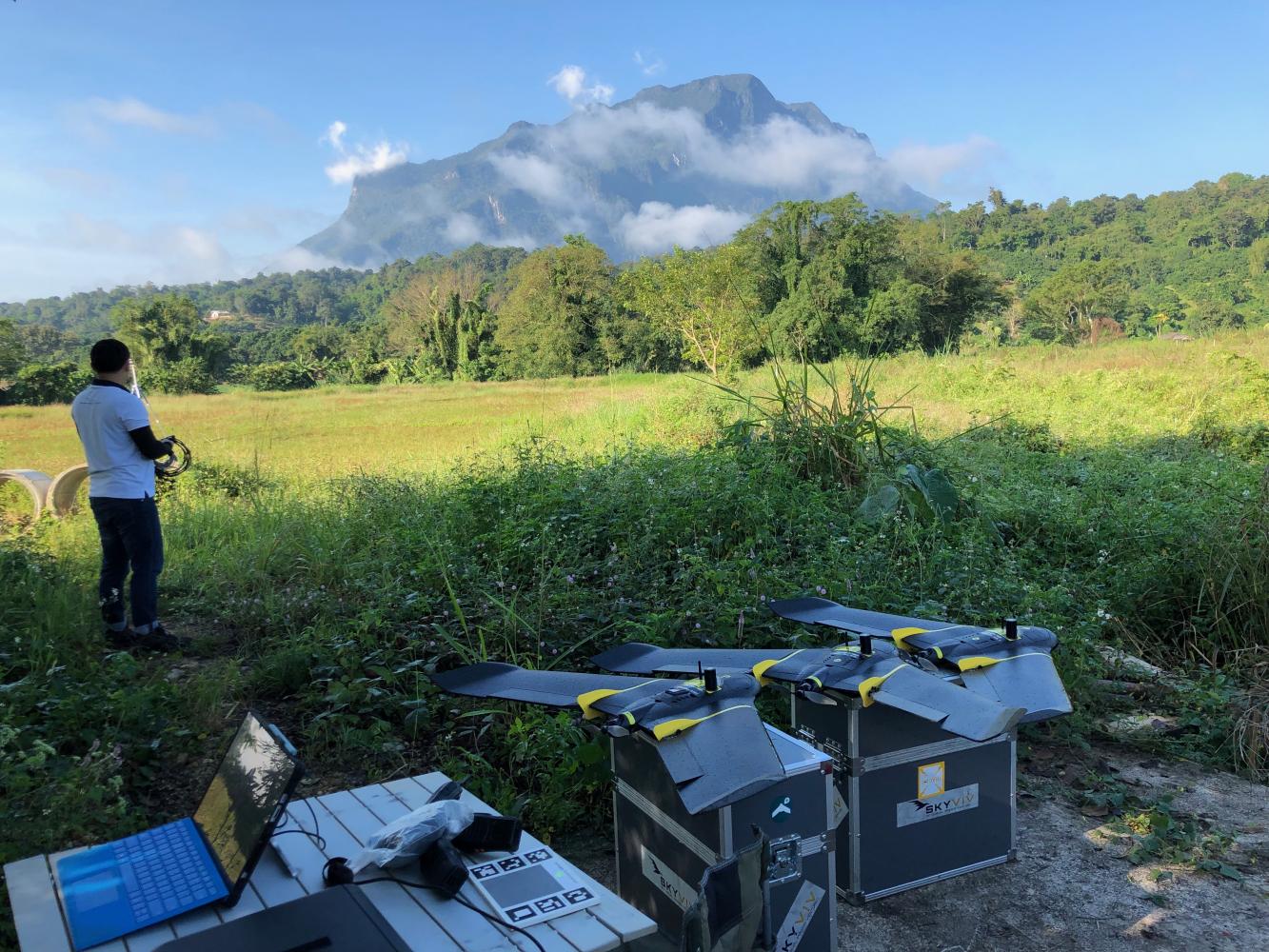 The SkyVIV crew sets up drones for use in aerial imagery operations.

Being able to accurately predict these figures will make the entire vertical process in agriculture more efficient. But for now the agricultural side of SkyVIV is not profitable and has to be offset by the industrial side of the business.

"We're looking at agriculture as a long-term investment because of the problems we have predicting crop yields," Mr Vivatvong said. "For now, most our revenue comes from industrial inspections."

For its agriculture mapping, SkyVIV uses an ultralight fixed-wing drone made by the Swiss company SenseFly. The flight path is mapped out digitally ahead of time, so it only requires a person to glide it into the air for the drone to make its run and then land itself. The drones can fly for 40-60 minutes depending on the model.

For industrial inspections, the company uses more precise drones to do maintenance checks on tight areas in factories and power plants. The drones can fly into smokestacks and narrow tunnels inaccessible to humans.

SkyVIV uses a quadcopter drone called Elios, made by another Swiss drone company, Flyability. The drone has a wire cage around it to protect the drone if it bumps into a wall and uses an HD and thermal imaging camera.

The images can be used to find areas in industrial sites that require maintenance, while fixed-wing drones can map a whole site from a distance.

The startup expects to break even this year. It's backed by the trading firm Loxley Group, as Mr Vivatvong is a former executive at the company and came out of retirement to found SkyVIV.

The company acts both as a distributor of Swiss-made drones and as a service provider for agriculture and industrial firms.

"Before the end of the year, we hope to come out with the equation we need to solve the problem," Mr Vivatvong said. "I think we're getting there."