It’s the epitome of a closed circuit: the utility helping power one of Southeast Asia’s biggest cities is building electric cars, batteries and charging stations for the nascent market, and then supplying the juice to keep them all running.

Billionaire Somphote Ahunai envisions his Energy Absolute Plc as a titan of EVs even though there are less than 1,500 battery-powered vehicles in the country. That’s about 0.004% of registered vehicles through December.

Southeast Asia has been slow to adopt passenger EVs because of high sticker prices and a predilection for two-wheelers, but the Thai government sees them as a way to ease Bangkok’s air pollution and fortify an automotive industry generating about 12% of gross domestic product.

Energy Absolute is using subsidies and tax breaks to put 5,000 EVs on the road by next year, backed by 700-plus charging stations. It’s also planning a $3 billion factory to make lithium-ion batteries.

The trend is clear: it’s time for Thailand to stop being complacent and pursue higher technology to drive economic growth, said Somphote, the utility’s founder and chief executive officer. EV technology opens up new opportunities for success by new players.

Energy Absolute, Thailand’s second-largest electricity generating company by market capitalisation, unveiled its Mine Mobility passenger EV at this year’s Bangkok Motor Show and immediately received more than 4,500 orders. The car is priced at about 1.2 million baht cheaper than a comparable Nissan Leaf or Kia Soul EV.

Yet the car will head out on the highway just as EV showrooms start getting crowded with foreign models.

Carmakers are chasing growth in Southeast Asia as combined sales in China, the US and Europe decline amid the trade war and Brexit. The Bloomberg World Auto Manufacturers Index is down more than 15% in the past 12 months.

BYD Co, the Chinese manufacturer backed by Warren Buffett, said last year it planned to deliver 1,100 cars to Bangkok as part of a deal with the government to become the biggest supplier of pure EVs.

Energy Absolute also will try to overcome local preferences for cheaper motorcycles and scooters. Thais buy about 2 million motorcycles a year, according to statistics compiled by BNEF. 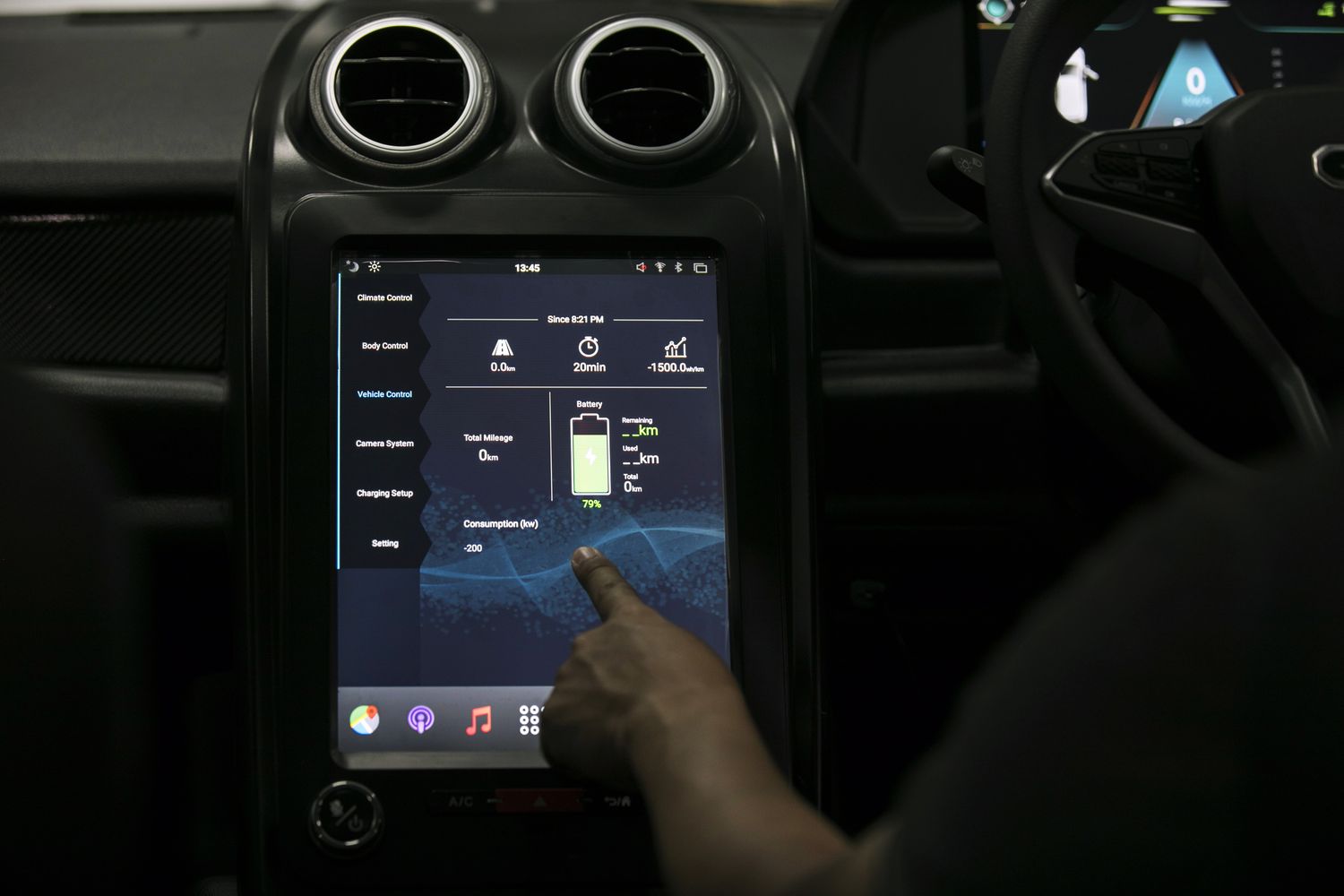 An engineer checks the battery level displayed on the control panel of an Energy Absolute Mine Mobility Spa1 electric vehicle at a workshop in Bangkok on June 10.

EVs will be a business that provides new growth for the company, said Suwat Sinsadok, a utilities analyst at Finansia Syrus Securities Pcl in Bangkok. This is the right business strategy, and they’re getting into it at the right time.

Energy Absolute markets the Mine Mobility as the first EV designed and built in Thailand. The five-seat hatchback can travel as many as 200km on a single charge, according to the company.

That’s less than a Tesla Inc Model 3 or BYD e6 but enough to convince a group of five taxi unions to order 3,500 cars for metropolitan Bangkok. The group chose Energy Absolute because it promised the earliest delivery.

"We’ve been trying to go electric for the past two years," said Theppanom Phinsuwan, the group’s representative. "We want to be first to the cars because we think EV is the way the world is heading."

Using EVs would cut drivers’ expenses by half, increasing their profit and allowing them to pay off their car loans sooner, Mr Theppanom said.

Taxi drivers typically spend between 500 and 600 baht per day running a gas guzzler like the ubiquitous green-and-yellow Toyota Corolla Altis. Charging an EV would cost about 200-300 baht.

Car-service providers — such as taxi and rental-car companies — are the initial targets for Mine Mobility, said Thanapat Suksuthamwong, the subsidiary’s managing director. There’s no better way to showcase the technology than to have people who drive long distances each day do it, he said.

Public and private fleet operators have the potential to drive the uptake of EVs, said Caroline Chua, a BNEF analyst covering renewable energy.

The batteries inside Mine Mobility cars will come from a lithium-ion battery plant now being built. If the factory reaches full capacity, it would catapult Thailand into third place globally in production.

Energy Absolute rivals Tesla in trying to integrate all stages of the EV life cycle: electricity generation, battery production, car manufacturing and charging-point installation. Tesla owners can recharge their cars at home with power generated by solar panels and use batteries made with Panasonic Corp. 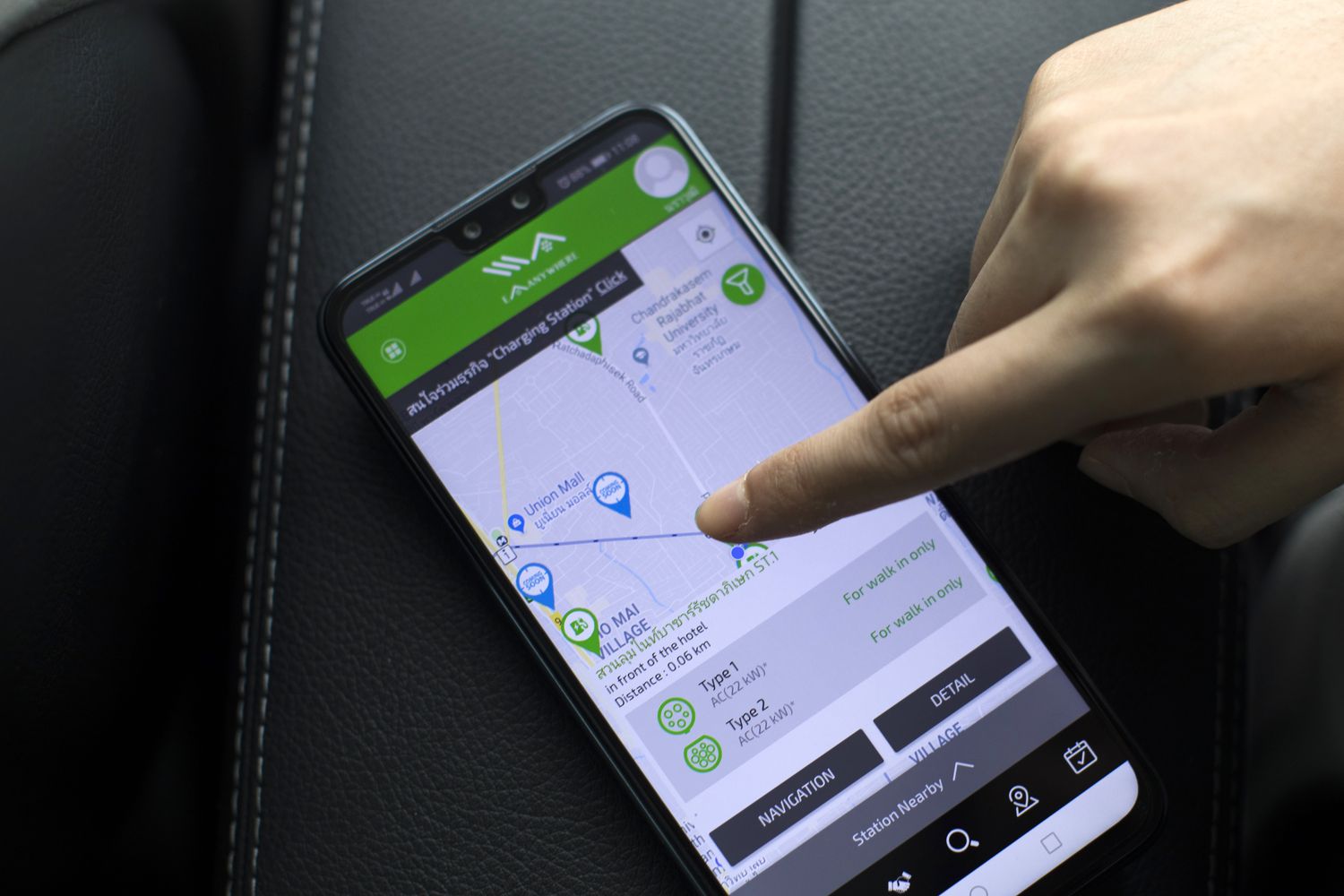 Energy Absolute electric vehicle charging stations are displayed on their EA Anywhere application on a smartphone in an arranged photograph in Bangkok on June 5.

Tesla doesn’t have a sales operation in Thailand, and the few models seen are delivered from places like Hong Kong, meaning they’re subject to import taxes that can double the sticker price.

Thailand is Southeast Asia’s first country to offer incentives for EV manufacturers and to reduce taxes on sales of their cars. Companies can get corporate tax breaks for eight years, exemptions from import duties on machinery and parts, and reductions in excise taxes.

That combination of policies and incentives is the most advanced in the region, according to BNEF. Indonesia said June 19 it will scrap taxes on imports of electric and hybrid vehicles by month’s end.

Energy Absolute has three EV models planned — the midsize Mine Mobility promised for next year, and then a cheaper compact and a pricier sports car. It’s building a 200-million-baht factory that can assemble as many as 10,000 cars starting later this year.

Yet there’s still a long road ahead to reach that volume, considering there were just 1,454 registered EVs — including buses and motorcycles — in the country as of December. By comparison, China is projected to sell triple that amount just in passenger EVs every day this year, according to BNEF calculations.

Energy Absolute has about 400 charging stations around Bangkok and plans to install another 300 this year. It wants to have at least one charging point every 5km.

Even as those domestic plans take shape, Energy Absolute plots its expansion as nearby countries —including Indonesia, Vietnam, Malaysia and the Philippines — set targets for adopting passenger EVs. Laos and Myanmar also are of interest.

"Thailand will be the leader of EV technology in this region," Mr Somphote said. "We’re first, and that should give us a headstart to develop the technology."