Next week will mark the one-year anniversary of the fatal tour boat accident in Phuket, and Thai tourism is still paying the price from the incident.

Recklessness, poor safety measures and a heavy storm were blamed for the 47 Chinese lives lost on board the Phoenix tour boat that capsized off Phuket last July 5.

The accident resulted in a sharp decline in the number of visitors from China to Thailand, though some have argued that the drop-off was a consequence of the tension between China and the US since late 2018.

Also, tourism operators said the closure of some popular beaches in the South of Thailand turned travellers to other countries in the region.

The China market plunged in the months after the event, with the biggest drop of nearly 20% in October, prompting the government to waive visa-on-arrival fees for visitors from 21 countries, including China, a month later. The waiver of the 2,000-baht fee has been extended twice and will expire in October. 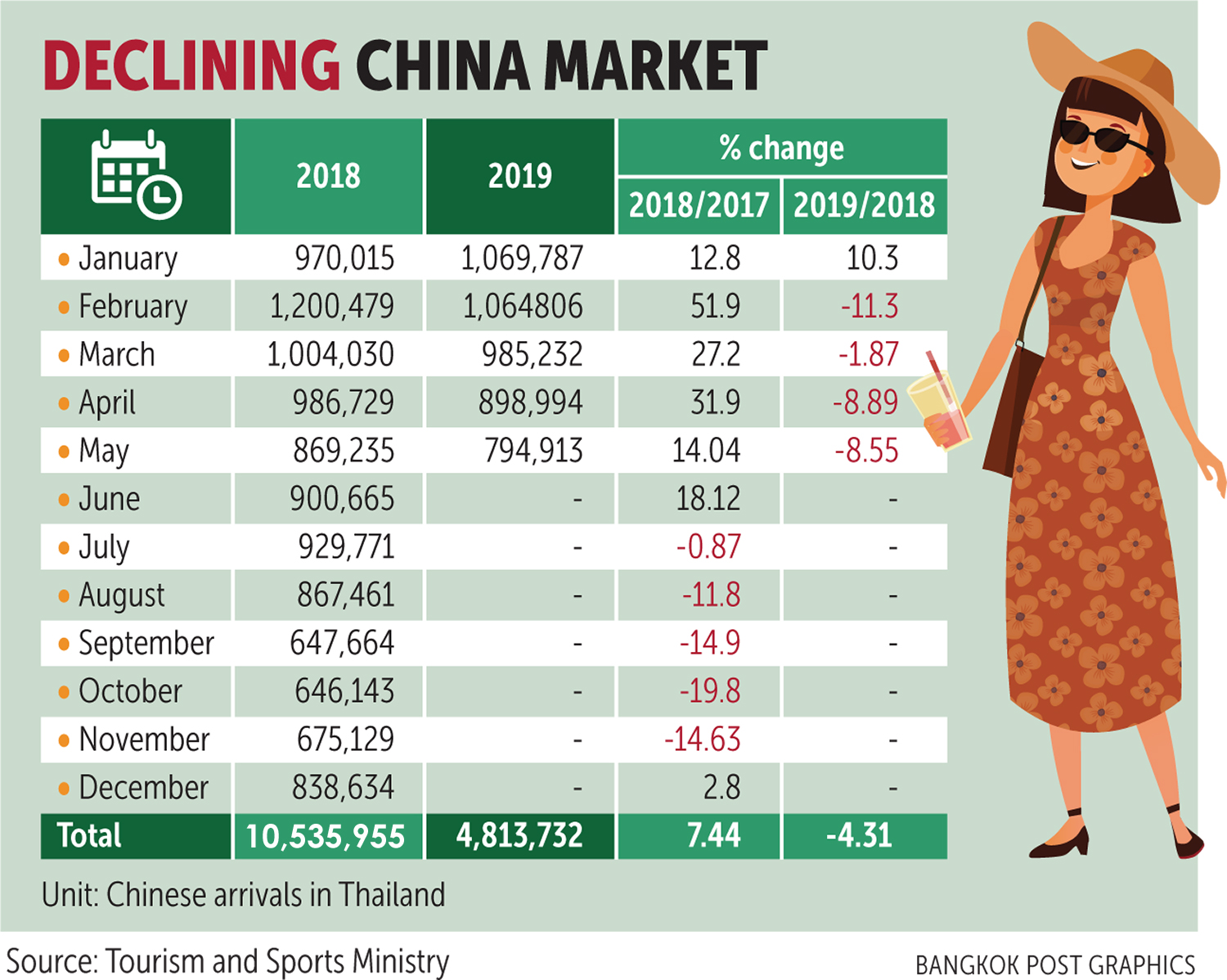 The situation hasn't improved much, as the decrease in visitors from the mainland continues, with a 4.3% year-on-year contraction in the first five months of 2019.

The China market is the biggest for Thai tourism, making up nearly 10 million visitors out of the overall 38 million international arrivals last year.

To lure back Chinese tourists, local authorities and tourism operators have been working to regain their confidence, especially regarding safety measures.

Wristbands for passengers boarding boats, efficient life jackets and an organisation responsible for marine disaster situations have been mandated.

Bhummikitti Ruktaengam, president of the Phuket Tourist Association (PTA), said stakeholders in Phuket's tourism sector have been working to improve safety systems in the province, especially preventions and rescues, after learning the hard way last year.

He said rescues will be conducted by the 3rd Naval Area Command under the Royal Thai Navy in Phuket, which has the capacity to send rescue teams to accident scenes quickly.

The association is also cooperating with the Marine Department for the improvement of the Vessel Traffic Management System (VTMS) project, which could provide better and safer maritime operations.

According to Mr Bhummikitti, the radar tracking system has been in place since 2014 and covers Phuket, Ranong, Trang and Krabi waters.

Some basic safety guidelines have been strictly enforced since the start of this year, including demand for all boats to provide life vests that meet the Marine Department's standards.

A meeting between local authorities and the private sector decided that passengers boarding tour boats have to wear GPS-trackable wristbands so that they can be located if there is an accident.

"At this time, Ao Por pier is the only pier operated by the private sector in Phuket that has been able to embed GPS technology into wristbands to track down tourists in emergencies," Mr Bhummikitti said.

More piers on the island will adopt the GPS tracking devices in the future once they have sufficient budget, he said.

Operators at some piers in Phuket use passport copies to check passenger numbers and identify tourists before and after trips.

"Most importantly, each ship must be supervised by skilful commanders who are able to deal with tides and winds," Mr Bhummikitti said.

Chamnan Srisawat, president of the Thai Federation of Provincial Tourist Associations (TFOPTA), said that apart from the decrease in Chinese tourists to Phuket, overall tourism in southern Thailand faces significant challenges, whether from the low season or political instability.

The temporary closure of several famous marine destinations for rehabilitation -- namely Maya Bay and the Similan and Surin islands -- is likely to push Chinese and South Korean tourists towards Vietnam instead, Mr Chamnan said.

As a tour operator in Krabi, he has called for the authorities to discuss closure plans with all stakeholders to allow business planning and removal of closed destinations from tour programmes.

Mr Bhummikitti said that despite falling Chinese visitors, overall tourist numbers in Phuket during the first quarter of 2019 rose 5-7% year-on-year. The structure of Chinese travel to Phuket has changed from tour groups to individuals.

The portion of travellers in groups fell to 30% in May from 65% in the same month last year, the gap being filled by free, independent travellers.

Many Chinese tourists who travel in groups have turned their attention to new destinations like Vietnam and the Philippines, Mr Bhummikitti said.

The US-China trade war is another reason why the Chinese have refrained from taking trips to foreign countries and have started to travel domestically instead to save money, he said.

Positive signs remain for the rest of the year, since the third quarter brings school holidays for Asia and Australia.

"There is some hope for more Chinese tourists during that time," Mr Bhummikitti said. "At the same time, other key markets like Singapore, Malaysia and Hong Kong will prop up tourist numbers."

In the fourth quarter, travellers from Europe are expected to reach 5-7% of overall numbers in Phuket, with strong demand from Germany and Scandinavia, even though some countries are facing economic slowdowns.