Chinese students in US fear for future amid trade war
Business

Chinese students in US fear for future amid trade war

As the United States ramps up its trade war with China, college students are becoming collateral damage -- and in many ways, direct targets.

Although education has always been a strong point of cooperation between the US and China -- 360,000 Chinese students were studying in the US last year -- the administration of President Donald Trump appears to see this as leverage as economic tensions intensify.

The US has argued that some Chinese students pose national security concerns. In the 2017 US National Security Strategy document, the administration pledged to consider visa restrictions on international Stem (science, technology, engineering and mathematics) students to prevent foreign competitors from obtaining prized intellectual property. At one point last year, The Financial Times reported, the White House even considered banning Chinese students entirely.

The Chinese government has been sponsoring the Thousand Talents Programme, which encourages overseas Chinese and foreign talent to work in China. The programme is supported by the Confucius Institute, which ostensibly operates language centres but doubles as a key player in China's effort to advance its soft power. Such programmes have increased US suspicion of Chinese educational exchange.

In the first quarter of this year, the rejection rate of Chinese student visas rose to 13.5% from 3.2% in the same period last year. Visa renewal procedures are also taking much longer than before, according to Bloomberg. 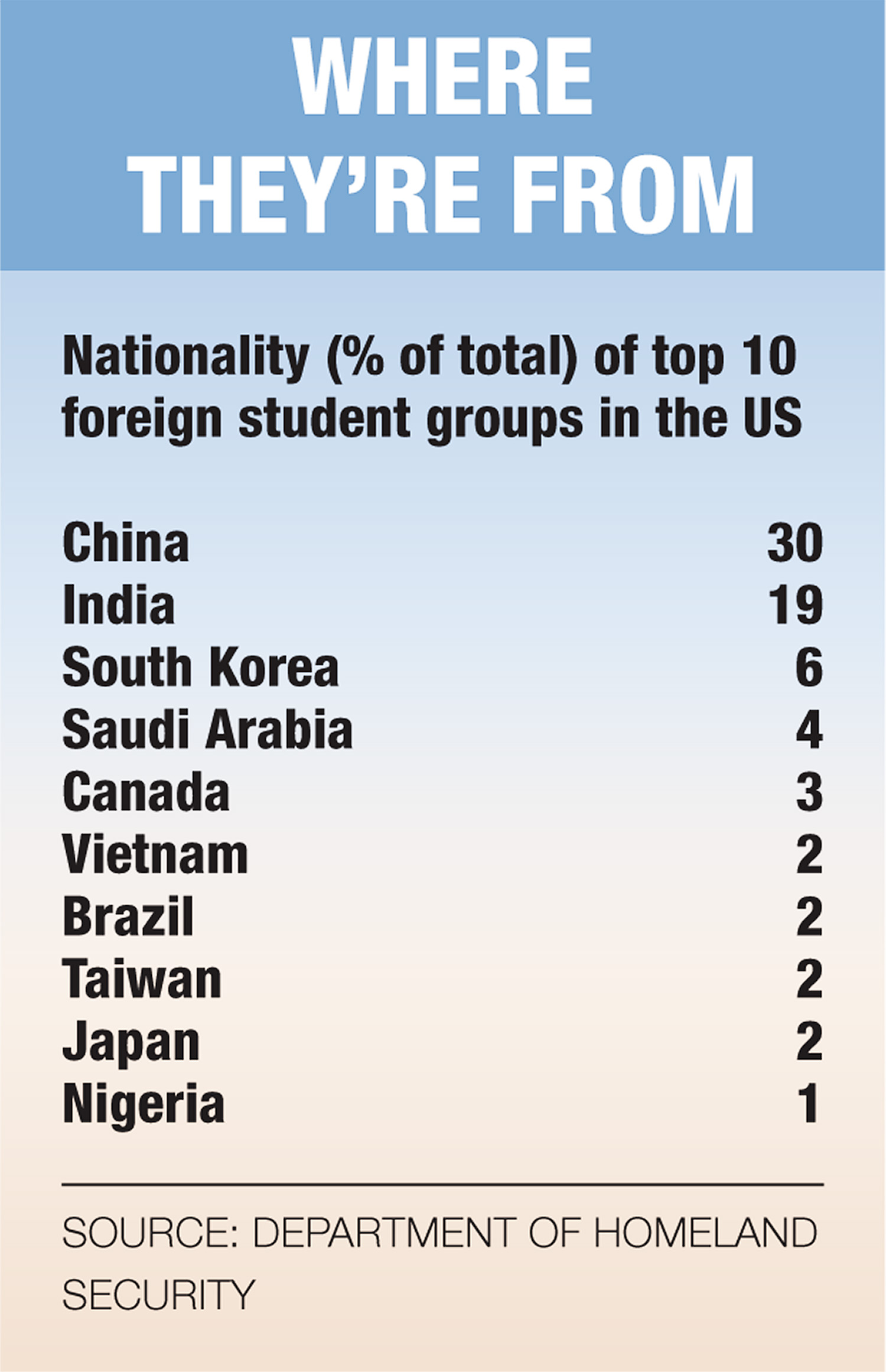 Multiple researchers with undisclosed connections or who received unreported funding from China have been terminated at American research institutes, including at the University of Texas MD Anderson Cancer Center and Emory University.

China has fired back at the US through the People's Daily, the mouthpiece of the Communist Party. A commentary argued that it was "beneath contempt for the US Congress and Federal Government to politicise China-US educational exchanges and cooperation with the accusation of 'China Threat' and 'Chinese Infiltration'".

The Chinese Ministry of Education issued an unprecedented advisory, reminding Chinese students to "raise their risk assessment, strengthen their preventative awareness, and make the appropriate preparations".

Julia C, a Chinese undergraduate student studying in California who works on advocacy for international students, told Asia Focus that she has some concerns about the Trump administration's new policies.

"The tensions place a lot of weight on students deciding to study in the US," she said. "Not only may job opportunities be even more difficult to attain due to scarce visa sponsorship and China-US tensions, but the social atmosphere may have grown tight and discomforting for overseas students."

She noted that she had been considering pursuing further study in the US. "I've been heavily considering applying for a Master's or PhD programme, and reading the news on Trump's sudden clampdown on researchers from the Chinese area is unsettling."

"With the growing discrimination and unease, I feel suspended in a political limbo -- where one part of me heavily believes in cross-cultural collaboration fostering innovation and ideas, but another wants to avoid being called a spy and having to study in a system that may work against me."

Another Chinese student, Jasmine Chen, told Asia Focus that she would consider going to Europe or returning to China after she finished studying in the US due to economic tensions between the two countries.

But despite the increased uncertainties, the US remains an attractive destination for many international students.

Gao Linprasert, the co-founder and senior adviser of Team Ace CBO, a community-based organisation providing college application advisory services based in Chiang Mai, cautioned against other international students putting too much weight on the issue of Chinese visas when deciding whether to apply to the US for college.

"The global [visa] denial rate in 2018 was 26.89%", Mr Gao told Asia Focus. "There was, obviously, an increase in the number of denials in China. But it is still only half the global average."

Asked whether this is likely to affect non-Chinese students, he said: "We have not heard of any anecdotal evidence that there is an increase in rejections for Thai students. Denial rates [in Thailand] have always been in the low single digits. Nothing that we have seen or heard indicates that the rate has gone up."

Indeed, the students that he is advising are not worried. "The news has caught the attention of parents more than the students," Mr Gao explained. "They follow this issue quite closely. But on the other hand, it hasn't had a chilling effect."

The most important factor in deciding whether to pursue higher education in the US remains the total cost, he said, as "getting a visa only comes further down the line of priorities."

Ms Chen agreed on this point, saying that "since the cost of gaining a degree is very high for international students, it is crucial to consider the payback and the future employment situation."

Mr Gao emphasised that there was no reason for Thai students to panic. "What happens in China stays in China. It is part of the lever of negotiations for the Trump administration."

However, he acknowledges that stricter vetting may be in place for the long term even after a change in the US administration, especially for doctoral students. "For Chinese students seeking US student visas, their success rate will be subject to demonstrating bona fide status and clearing any required screening for US national security concerns," he predicted.

Mr Gao also noted that the US remains an attractive destination for education. In Stem, for example, the US retains subject excellence and leadership. "The American system of higher education gives the best overall preparation for careers and the ever-changing 21st century."

US liberal arts programmes, where students do not have to declare a major until the end of their sophomore year and instead pursue a wide range of disciplines, also outshine the systems of other Western countries, according to Mr Gao.

"Even the smallest colleges have an emphasis on building up skills beyond the classroom. Soft skills and teamwork are being emphasised. I think the parents have seen the success of graduates from the US," he said. "The concept of the liberal arts is finally catching on."

Ms Julia also echoed Mr Gao's sentiment about the value of the liberal arts. She explained that "although the UK offered appealing higher education opportunities, it also demanded me to already know what major I desired to study."

"I picked the United States because of its socioeconomic diversity and academic freedom," she said. "The US was the best choice for me, at the time of my decision, and although it may have been tough adapting to US culture in the beginning, it's a decision I have yet to regret making."