Led by one of Thailand's richest men, the company aims to change the way locals drive by handling everything from battery and car making to charging stations

Thailand could be on the verge of an electric vehicle (EV) revolution. After decades of promising ubiquitous plug-in stations and quiet roads full of whirring, non-petrol-powered cars, the futuristic fantasy could soon be a reality.

Dubbed the "Tesla of Thailand", SET-listed Energy Absolute (EA) will kick off the first phase of its 100-billion-baht lithium-ion battery production line in mid-2020, the largest of its kind in Thailand, anticipating a "tidal wave of new business growth".

The company, led by one of Thailand's richest men, aims to change the way Thais drive by building a more efficient battery that makes the switch to EVs practical and affordable.

The cost to replenish a battery is tentatively estimated at seven baht per kilowatt-hour for electricity.

The long-touted EV future could finally arrive in as little as a few years.

"It's time to bring drastic change to the auto industry and bring EV prices down further to 500,000-600,000 baht next year to promote what I believe in 2020 will be the year for the take-up of EVs," said electricity billionaire Somphote Ahunai, founder and chief executive of Energy Absolute and No.10 on Forbes Thailand's 50 Richest list with an estimated net worth of US$2.8 billion (85.8 billion baht). 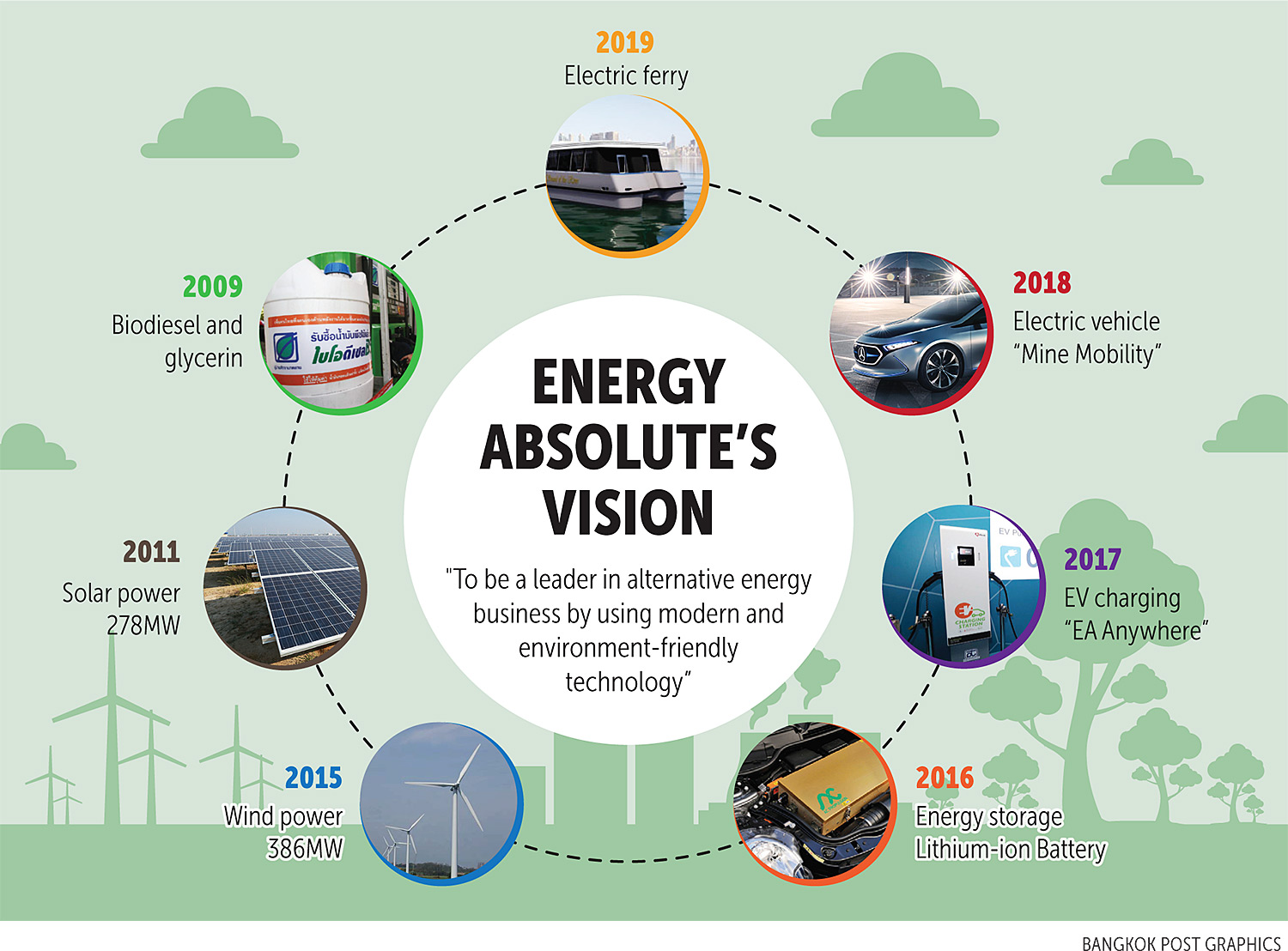 "We're ready to catch the next big wave of growth through innovation, as well as banking on a future served primarily by energy storage and EVs," he said.

Mr Somphote said his company is steering the business towards lucrative battery and EV opportunities and away from the solar and wind energy that he believes will become overly competitive.

EA is on the verge of integrating all verticals of the EV life cycle: electricity generation, battery production, car manufacturing and charging-point installation.

If successful, the implications of EA's ambitions are enormous for Thailand, a country with a large automotive industry but no internationally recognised car brand of its own. An EV, more affordable than a Tesla and with a better battery, would not just be a regional hit, but a global phenomenon.

EA is scheduled to start production of the 5-billion-baht first phase of the battery lithium-ion gigafactory in July 2020 in Chachoengsao province, with one gigawatt-hour (GWh) of energy storage capacity annually.

The company aims to increase the capacity to 50GWh in the second phase by 2022, making the plant larger than Japanese electronics maker Panasonic's 35GWh factory for US-based Tesla in the state of Nevada.

EA acquired a 77% stake in Taiwan-based Amita Technologies for 3 billion baht to take advantage of the firm's lithium-ion technology.

Under the partnership, Amita will provide automated production technology for STOBA (self-terminated oligomers with hyper-branched architecture) -- a new kind of hyper-branched polymer that can suppress electron and ion conduction if something goes wrong. STOBA, which is commercialised in Taiwan, can have a higher capacity, greater safety and a longer life cycle. 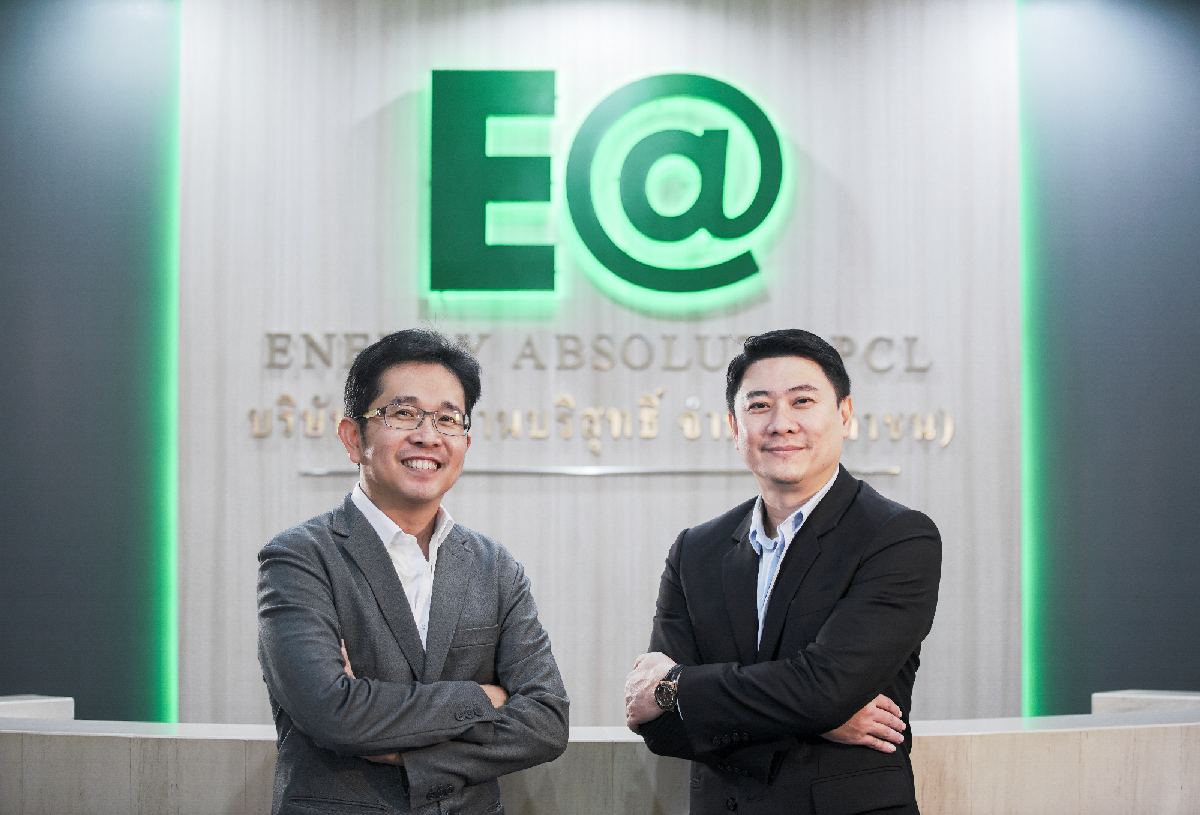 Mr Somphote said his company is looking to build an energy storage production facility overseas by partnering with local operators in Indonesia, the first overseas country where EA plans to expand.

"EA expects revenue from batteries to account for half of its total in the next five years," said Amorn Sapthaweekul, Energy Absolute's deputy chief executive.

Analysts see EA recording a net profit of 6.2 billion baht on revenue of 24 billion baht once the company's wind energy business is running at full capacity.

Tapping into the evolving EV business, EA is spending 800 million baht to increase the number of charging points to 1,000 by the end of this year, following a binding agreement signed with four partners today. The company has 500 stations in Bangkok and other major cities.

"We want to set up at least one charging point every five kilometres in Bangkok and the surrounding metropolitan area to assure EV users," Mr Somphote said.

The company supplies both fast-charging and slow-charging services. A fast charge takes 10-15 minutes to replenish an EV battery to 80%, enabling the vehicle to travel 200-250km. But this method degrades the battery faster. A slow charge, typically done overnight, takes 6-8 hours but is better for the long-term health of the battery.

EA is scheduled to start its EV assembly line at its 200-million-baht plant in Chachoengsao province in December, with capacity to assemble 10,000-15,000 units a year.

The company says it can deliver the first batch of EV orders for 4,562 Mine MPVs in the first quarter of next year.

EA launched prototypes of the first EVs in 2018 with three models -- Mine City, Mine MPV and Mine Sport -- all of which use EA batteries.

After years of being derided as a joke by car manufacturers and the public, Mr Somphote said interest in his EVs has risen sharply as governments around the world move to ban petrol and diesel cars in favour of cleaner and greener EVs.

"We have seen a tremendous rise in availability, especially in China," he said. "EVs are likely to take off in the Thai market next year, and prices should come to be on par with conventional cars over the next few years."

In the past, most manufacturers were reluctant to make EVs as they sought to cash in on existing conventional car models. Nowadays, many are awakening to the EV trend. This can be seen by the uptick in EV vehicles rolled out by various manufacturers.

Mr Somphote said the state should support Thai companies in the EV sector because Thai-based manufacturers can produce 100% of the components for EVs.

"Thailand has been lagging in terms of foreign direct investment for a long time now," he said.

The company is scheduled to launch two battery-powered ferries for commercial service in the fourth quarter this year.

The company will become a public transport operator, running a route between Nonthaburi and Wat Rajsingkorn on the Chao Phraya River, similar to the one plied by Chao Phraya Express Boat.

The air-conditioned electric ferry will have capacity for 200 passengers and comes with batteries comprising 800 kilowatt-hours and two electric motors at 180kWh.

The company will charge 15-32 baht per trip, similar to other operators' rates.

Mr Somphote, 52, plans to start winding down for retirement at 57, taking up a slower pace of life and spending more time relaxing. His low-key demeanour contrasts with that of his contemporary, Tesla's braggadocious chief executive Elon Musk.

When Mr Somphote was 38, he actually planned to retire then. At the time, he thought the 2 billion baht he earned from managing funds overseas was sufficient to send his children to study abroad and take it easy for the rest of his life. But he stuck with his father's words that if he didn't go to work he would not be a good example for his children. So he went back to work, just not as an employee.

"I started off with savings of just 5,000 baht when I left my full-time job as a salaryman," he said. "My first paycheck then was 20,000 baht. I could have never imagined reaching this point in life. What I am doing now is just pursuing my dreams for the sake of country."

Mr Somphote acknowledged that after he formulated EA, it ended up being more challenging than he thought. "It's not that I couldn't do it, but it took a lot of nerves to pull it off."

He is building a second generation to replace him as retirement nears. Employees who got their start at the company, still in their 30s and 40s, are the ones he is moulding for success.