Siam Commercial Bank (SCB) has invested an undisclosed amount in Go-Jek, the Indonesian unicorn startup, as Thai banks line up to fund ride-hailing services and strive to expand into the lucrative digital banking sector under a comprehensive ecosystem of offshore partners.

The move by the country's largest bank by assets comes in the wake of Kasikornbank's large investment in Grab Thailand with a US$50 million deal in November 2018 and plans to open a co-branded mobile wallet, GrabPay, with KBank in the second half of 2019.

According to Bloomberg, Go-Jek has secured investment from SCB. It's unclear how much SCB is investing in Go-Jek, said a source close to the matter who asked not to be identified.

The partnership will help Indonesia's most valuable technology startup bolster its financial services, while SCB is counting on online growth to help increase its revenue, the source said.

Sarat Ruttanaporn, co-president of SCB, said the investment in Go-Jek is not meant to escalate competition with KBank and Grab.

He said the bank will collaborate and invest in Go-Jek, expanding greater business opportunities in digital banking under the comprehensive ecosystem of the offshore partner.

SCB will further search for business strategies through partnership models and growing its business by changing the banking landscape worldwide.

Southeast Asia's banks are increasingly teaming up with tech firms that are getting onto their turf, offering financial services from digital payments to consumer loans. KBank also announced a joint venture with Line, whose Line Man feature directly competes with Get, Go-Jek's brand in Thailand.

Founded over a century ago by royal charter, SCB is Thailand's oldest homegrown lender. It's the latest to join Go-Jek's ongoing Series F round, a term denoting late-stage financing. 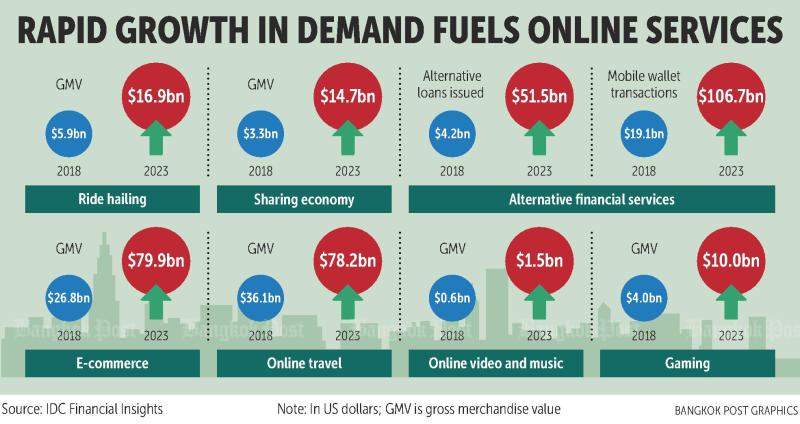 The startup has already raised over $1 billion as of the round's first close, Bloomberg reported in February. Google, JD.com and Tencent invested alongside Provident Capital.

Go-Jek, which debuted its app for hailing motorbike taxis in Jakarta in 2015, is expanding beyond Indonesia to cater to consumers across Southeast Asia, aiming to popularise an all-purpose "super app" similar to Tencent's WeChat in China.

Go-Jek is valued at $10 billion, according to CB Insights, and hosts more than 20 on-demand services on its platform, from food delivery to cab hailing.

Michael Araneta, associate vice-president of IDC Financial Insights, said the group estimates ride hailing to have a gross merchandise value in Asean of $16.9 billion by 2023 from $5.9 billion in 2018 with a compound average growth of 23.4% during 2018-23.

Thailand's ride-hailing business should account for 20% of the Asean market, Mr Araneta said.

With the involvement of large companies in Grab, Go-Jek and Line, it's clear that competition in super apps has arrived in Thailand, he said.

Super apps built on ride hailing make sense because transport is part of everyday life, he said, and banks like SCB should participate in these platforms so that their services get entrenched in the lifestyle of consumers.

Ferraris for the people: luxury goods now sold in fractions