Auto parts makers can survive the shift to EVs, but losses loom for those that cannot adapt

A whole car assembly line for Honda in Prachin Buri. The government is keen to attract more investment projects for EVs and their components. (Photo by Pattanapong Hirunard)

It's been over two years since the government laid a foundation for electric vehicle (EV) production in the country. The scheme has garnered 20-30 investment applications, covering car assembly, vital parts manufacturing and EV charging stations.

The Board of Investment (BoI) has yet to grant investment incentives to all applicants, saying it's considering many for plug-in hybrid EVs, battery EVs, electric buses and EV parts worth a combined 1.4 billion baht. It's also looking at applications for charging station projects worth 36 billion baht.

Toyota and Honda have already started manufacturing in Thailand for their hybrid EV projects, while Mercedes-Benz and BMW applied for incentives for plug-in hybrid EVs.

FOMM battery-powered cars are available for commercial sale now, but sales have not been tallied because the vehicle is categorised as a quadricycle or four-wheeled micro-car.

The remaining four applicants -- Nissan, Mazda, SAIC Motor-CP and Mitsubishi -- have yet to announce or start their assembly lines for EVs.

The BoI in March agreed to renew incentive packages given to hybrid EVs in a bid to lure more investment.

Ms Duangjai said many investors were required to submit their applications for hybrid cars in 2019, while assembly of battery EVs is required within three years.

The application period for hybrid cars ended in 2017, while for other types of EVs and components it expired last year.

"Many companies still want to submit their applications to invest in hybrid EVs," Ms Duangjai said. "The government is open to that request, but it requires investors to assemble battery EVs as well in order to speed up production."

The BoI announced in the Royal Gazette on May 27 that it would allow applicants for battery EVs to produce hybrid cars during the first three years of operation.

But the BoI requires each investor to produce at least one EV part in the first year and up to four pieces within three years. 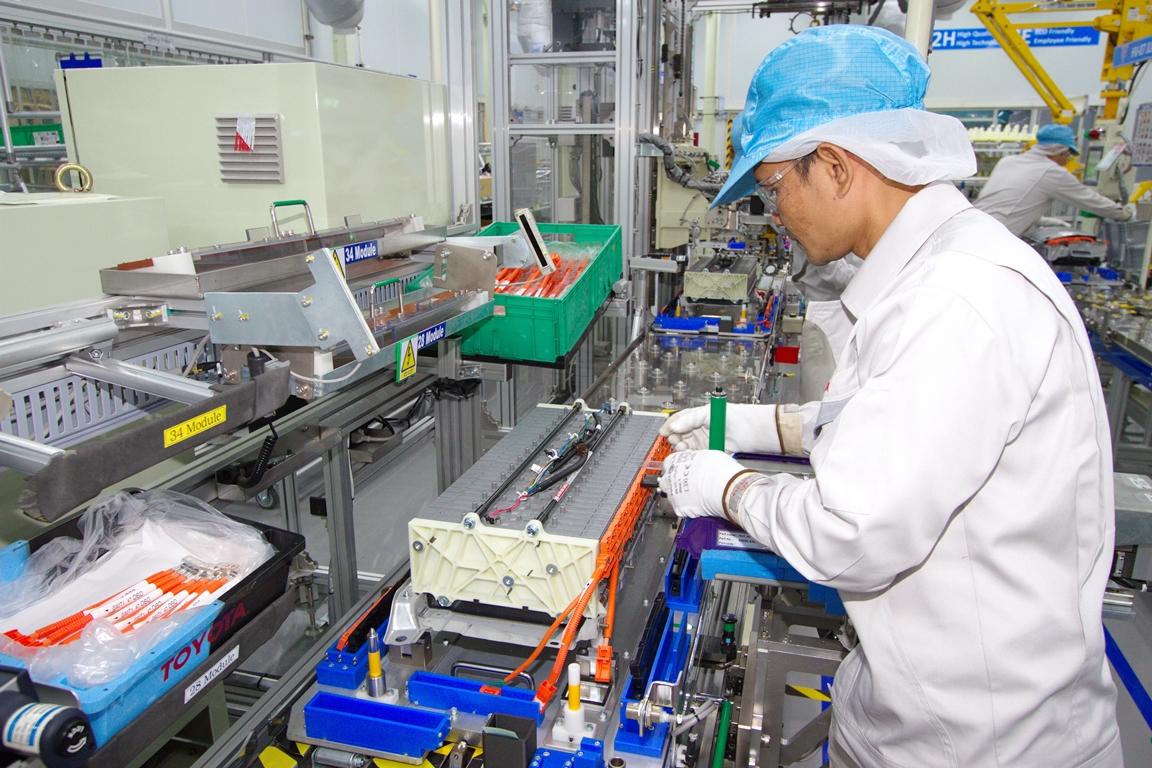 A battery assembly line for Toyota in Chachoengsao province.

Achana Limpaitoon, president of the Thai Auto Parts Manufacturers Association (Tapma), said many local auto parts makers are optimistic about EV sentiment in the country, though Tapma used to be worried about the segment.

"Thai manufacturers must accept that EVs will mean a decline in certain assembled auto parts, with lines for engines, transmissions and exhaust pipes likely shuttered with the arrival of battery EVs," she said.

K-Research said the transition period between ICE cars and battery EVs will have little effect on the global supply chain the next decade because many markets still require ICE cars, hybrid EVs and plug-in hybrid EVs.

"The price tag of battery EVs remains unaffordable, while more EV charging stations are crucial for the expansion of battery-powered cars in countries," K-Research said. "Moreover, many prominent automakers need more time to transition to new technology to reduce suffering in the global supply chain, in which they made a massive investment earlier."

"Some 2,500-3,000 Thai parts makers still produce ICE parts for conventional cars and ship to undeveloped countries, but they have to adapt for the future," she said.

Thailand is a production base for Japanese cars, and those firms need a long-term outlook for their EV platforms for both local and overseas markets, K-Research said.

"They will plan for a massive production volume of EVs in the long run, and with this movement, engine and transmission makers will suffer from new EV plans," it said. "EV technology is changing and Japanese automakers have to restructure their supply chain in Thailand."

K-Research forecasts less of a negative impact for Thai parts makers a decade from now, as EVs should gain a foothold in Thailand by that time.

"But battery EVs are coming over the next decade and will eventually play an important role," the research house said. "Battery EVs should represent 4.7% of the market by 2028, leaping to 22% by 2038." 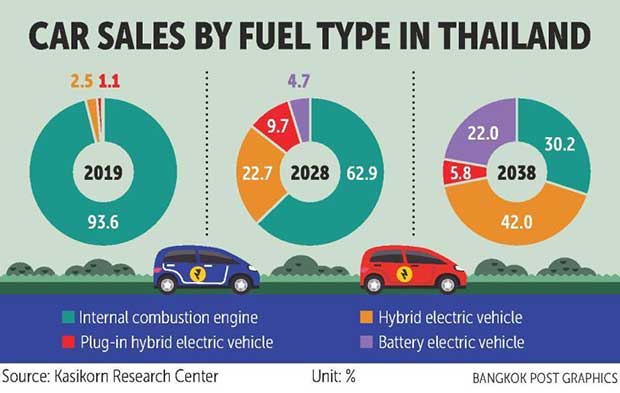 Many automakers decided to team up to share in the development of vehicle platforms, such as Toyota and Mazda; Mazda and Isuzu; and Nissan and Mitsubishi.

"With this business model, the Thai parts supply chain can survive for at least 10 years with higher purchase orders, so many manufacturers are investing in imported machinery to handle the increased orders," K-Research said. "As battery EVs become more popular over the next decade, Thai parts sales will be limited, with the possibility of a supply chain loss of 3.78 billion baht from 2019 to 2028, mainly from engine makers."

For 2029-38, battery EVs will gain in importance in Thailand for both local sales and exports, lowering demand for engines, transmissions and electric systems gradually, the research house predicts.

"Many parts makers will face aggressive competition and may opt for merger or acquisition deals to control their operating costs," K-Research said. "ICE cars will be replaced by battery EVs during this period."

"Thai parts makers have to shift from engines and transmissions to battery and electric motor manufacturing to maintain their competitiveness," it said.

Helping your talents build the skills they need