IN THE SPOTLIGHT: The Xayaburi Dam in Laos has become the focus of attention following a widespread drought which has affected several provinces along the Mekong River. Critics have linked the sharp decline in water levels to a trial run of electricity generators.

The unseasonal drought currently affecting the lower Mekong Region has alerted both the public and the authorities to the activities of a series of dams further upstream on the international river.

Jinghong Dam in China and Xayaburi Dam in Laos are both being blamed for the low levels of water in Thai areas of the Mekong.

According to an announcement by CK Power Plc, the operator of Xayaburi Dam, the dam's hydropower generation was given a trial run during July 15-29 ahead engaging in full-scale electricity production for the Electricity Generating Authority of Thailand (Egat) in October.

It has largely been assumed that water retention was needed for this test and that it has caused a knock-on effect downstream.

CK Power denied the throughput of water has altered and suggested the lack of rain is the reason for the drought in the vicinity.

DAM 'NOT TO BLAME'

To address public concern, the company recently invited the media to visit the site to see how the dam works and witness the amount of water being let through during the trial run.

According to the company, the dam has nothing to do with the drought, which it says has been caused by a lack of rainfall in Luang Prabang, which is around 80 kilometres north of Xayaburi Dam.

Between January and July, less than 400 millimetres were recorded, compared with around 1,200mm during the same period last year. This is the lowest accumulated rainfall recorded in 100 years for the area. Additionally, maintenance to Jinghong Dam in China also resulted in less water flowing into the lower Mekong region, claims CK Power.

"We have not retained water as claimed by many people. It is not true. We operate a run-of-the-river hydropower dam that does not need water storage. The inflow of water equals to the outflow, which is the concept of a run-of-the-river dam," said Anuparp Wonglakorn, deputy managing director of Xayaburi Power Company.

According to the company, the amount of water flowing into the dam in July is around 1,839 cubic metres per second (m³/s) on average, compared with 6,452m³/s last year.

The Xayaburi 1,285-megawatt river hydropower project will be one of the largest run-of-the-river hydropower dams on the Mekong River, which has sparked concerns of local people and activists about the immense impact its activities will have on one of the world's largest freshwater ecological systems.

The dam will be 820 metres long and 32.6 metres high with a rated hydraulic head of 18 metres. Sitting at the head of a 272,000 sq kilometres catchment area, it will create a pondage area of 1.3km³ gross storage capacity and a surface area of 49 sq kilometres.

The pondage area will reach 30 metres in depth and stretch between 60 and 90 kilometres. The barrage will feature a navigation lock, low-level outlets for sediment flushing, state-of-the-art fish passing facilities and two fish lifts.

Mr Anuparp explained the process of reducing the water flow was done gradually last year to limit any impact on communities further downstream.

He added that requests to lower the water level lower will not help alleviate the drought because the amount of water north of the dam is limited and also likely to cause the river bank to collapse if released too quickly.

Thanawat Trivisavet, managing director of CK Power and Xayaburi Power, said the company has made environmental issues a primary concern because the company wants to see the Xayaburi Dam become a sustainable hydropower model for the lower Mekong region, adding construction has complied with all the Mekong River Commission's guidelines, especially controversial aspects involving sediment and fish migration.

"We have spent 19.4 billion baht alone to construct a system to help fish migrate upstream. We have applied the best technology in the world to make it achievable. We have also invested in technology to allow sediment to pass through the dam, rather than get stuck on either side, as we understand that sediment is a source of food for fish and great fertiliser for plant life both in the river and on its banks," he said.

Regarding its "fish ladder" (a structure to facilitate fishes' natural migration), the company has spent around five years to complete its 460x18 metre, with a slope of 1.2%, design. It claims that a ladder of these dimensions will all size of migrating fish to pass through it.

There are also 48 pools which have been built as "fish shelters" so that the fish will not be affected by strong water flows.

When the fish arrives at the "fish lock", they are lifted by an increasing water level to an upper channel linked with the upstream river. It takes around an hour for a fish to move from down to upstream segments of the river. This mechanism will be ongoing on a 24-hour basis in five-tonne batches. 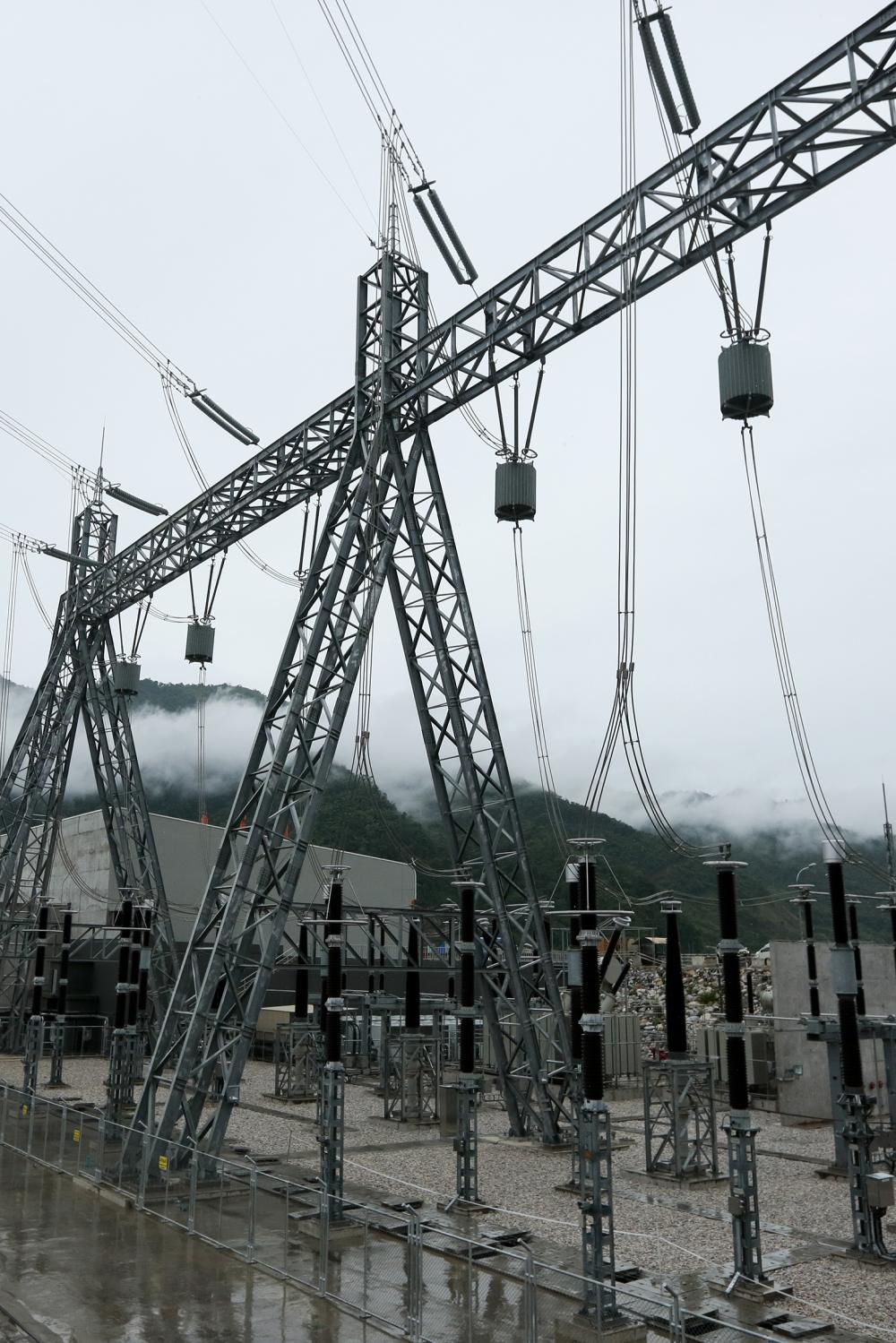 MIGHTY: The Xayaburi Dam is projected to have the largest hydroelectric power capacity in Southeast Asia at 1,285MW.

Thanasak Poomchaivej, manager of environmental engineering for the project, said all designs have been optimised to allay ecological concerns, especially the fish ladder, which although apparently simple has required a huge amount of time and money to develop.

He added that initial results show a "satisfying" outcome with a high volume of fish passing the dam by way of the ladder technology. In the future, tags will be attached to these migrating fish so that scientists can conduct detailed research into their breeding routes.

The company invested 135 billion baht into the eight-year construction project, which started in 2012 and is currently 99.4% complete.

It is estimated that it will produce 7,600 gigawatt hours (GWh) of electricity per year, of which 7,300GWh will be sent to Tha Li district in Loei province in Thailand, with the rest allowed for domestic use in Laos.

The company's concession lasts until 2050, after which the project will be transferred to the Lao government. It is the company's second hydropower investment in Laos after the success of Nam Ngum 2 Dam.

There are 11 run-of-the-river dams expected to be constructed along the mainstream Mekong River, of which Xayaburi is one.

The projects are fully supported by the Lao government, which has vowed to become the "Battery of Asia" by virtue of its river resources.

Phonesay Phongsavath, head of the Project Development Division in Laos' Ministry of Energy and Mines, said the Xayaburi Dam will be a model for harnessing the country's capacity to produce hydroelectricity in an environmentally friendly manner.

Mr Phonesay added that Lao people will also benefit from the project through better living conditions as a result of job and wealth creation, together with technology transfer which will increase engineering skills in the country.

There are 15 villages affected by the project with seven of them requiring resettlement into new sites. This means the forced relocation of 2,975 people.

Pianporn Deetes, Thailand and Myanmar Campaigns Director at International Rivers, said she remains doubtful whether the fish ladder will be a success, suggesting the river should be used as a laboratory to test unproven concepts.

"The company is trying to say the dam will not cause any impact on the ecosystem, but that is impossible," she said. "Some 70% of fish in Mekong River are migrating fish that breed in line with the river's ecological system. No one can guarantee that those migrating fish will not be affected by the dam's operation," she said.

Previously, the Mekong River Commission launched a "Review of the Design Changes Made for the Xayaburi Hydropower Project", saying the company has made a substantial investment in monitoring, research and re-engineering to further minimise potential impacts.

However, in some cases, the detailed baseline information (such as fish, aquatic ecology and sediment) had not been provided in sufficient detail to allow an in-depth assessment of the likely efficacy of the revised design.

Representatives of the Thai Mekong People's Network from Eight Provinces on Friday filed a petition to the Administrative Court, demanding Egat delay power purchases from Xayaburi Dam which will start in October, pending further investigation into its potential role in the unseasonal drought.

Some 37 representatives from drought-affected communities requested the court injunction arguing that there is clear evidence that the people are being negatively impacted by the dam's operation.

"We have been suffering this unusual drought since the dam's trial operation began. The water receded significantly after that. We want the court to issue an order requiring the company to apply mitigation measures to deal with the problem," said Sor Rattanamanee Polkla, a lawyer for the Community Resource Centre Foundation.

BEIJING: Beijing has reached “temporary herd immunity” and its Covid outbreak is nearing an end, a city health official said on Tuesday, in another sign China’s unprecedented virus wave is waning.