Thailand Institute of Justice hopes that Restorative Justice will prove to be the crucial tool needed to resolve issues of prison overcrowding and congestion in the court system and reintegration of victims and offenders into the community.

Thailand Institute of Justice (TIJ) conducted a National Symposium on Restorative Justice, inviting key stakeholders in the criminal justice system, other interested parties, and experts to share useful ideas and identify essential obstacles in the criminal justice system and its problem solving mechanisms. It is hoped that Restorative Justice can alleviate overcrowding in prisons and congestion in the court system, and effectively reform offenders so that they can return into society. It is hoped that it can empower and help victims, restore their well-being, ensure effective reparations and engage the community in assisting victims and offenders in reintegrating into the community. 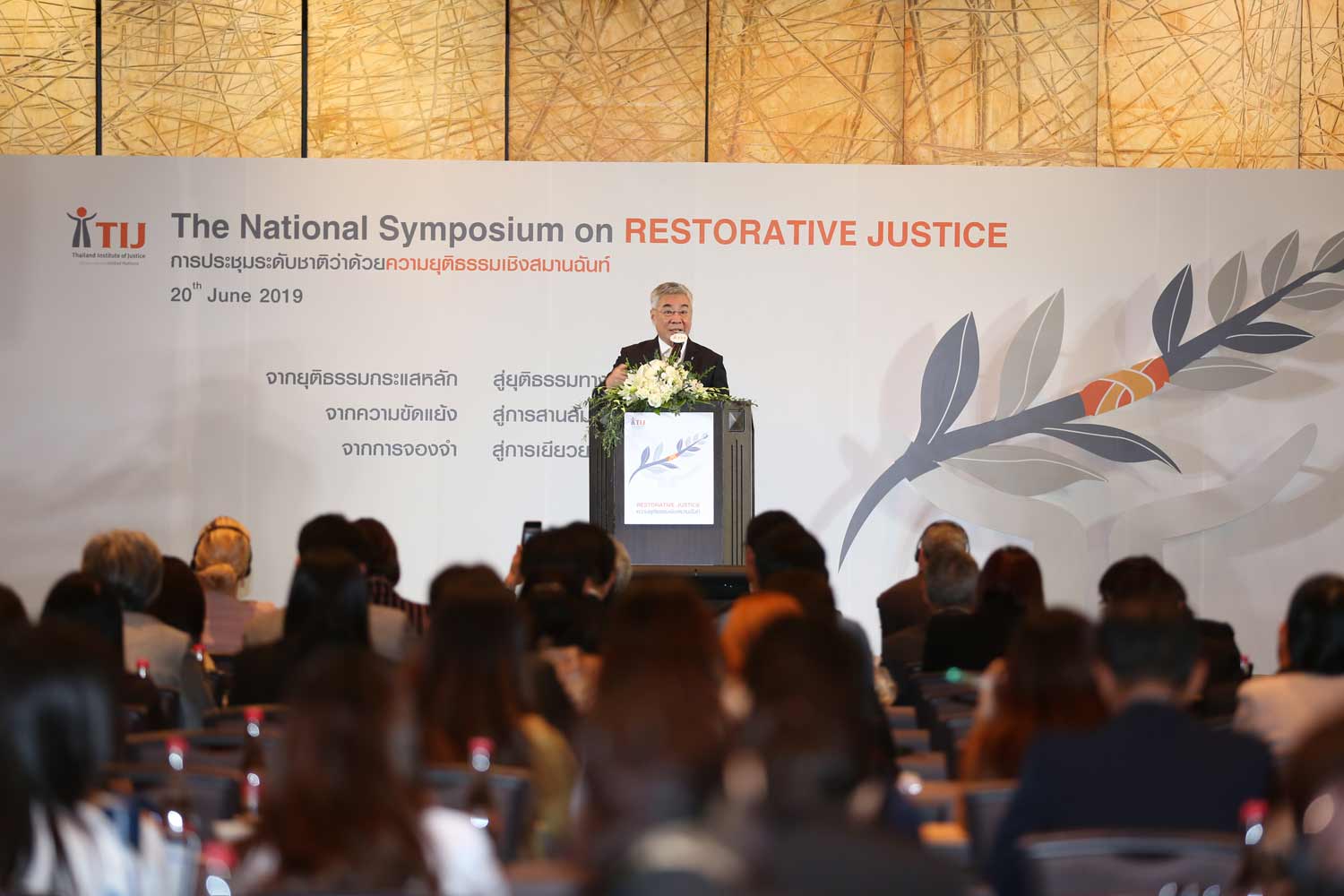 “TIJ, as an academic agency and one of eighteen organisations in the UN Crime Prevention and Criminal Justice Programme Network, has cooperated with criminal justice bodies, experts, and interested parties who want to solve the problems in the criminal justice system, to produce useful information in order to promote participation and trust in the principles of Restorative Justice for every sector in society, and to update the United Nations Office on Drugs and Crime (UNODC) Handbook on Restorative Justice Programmes.” 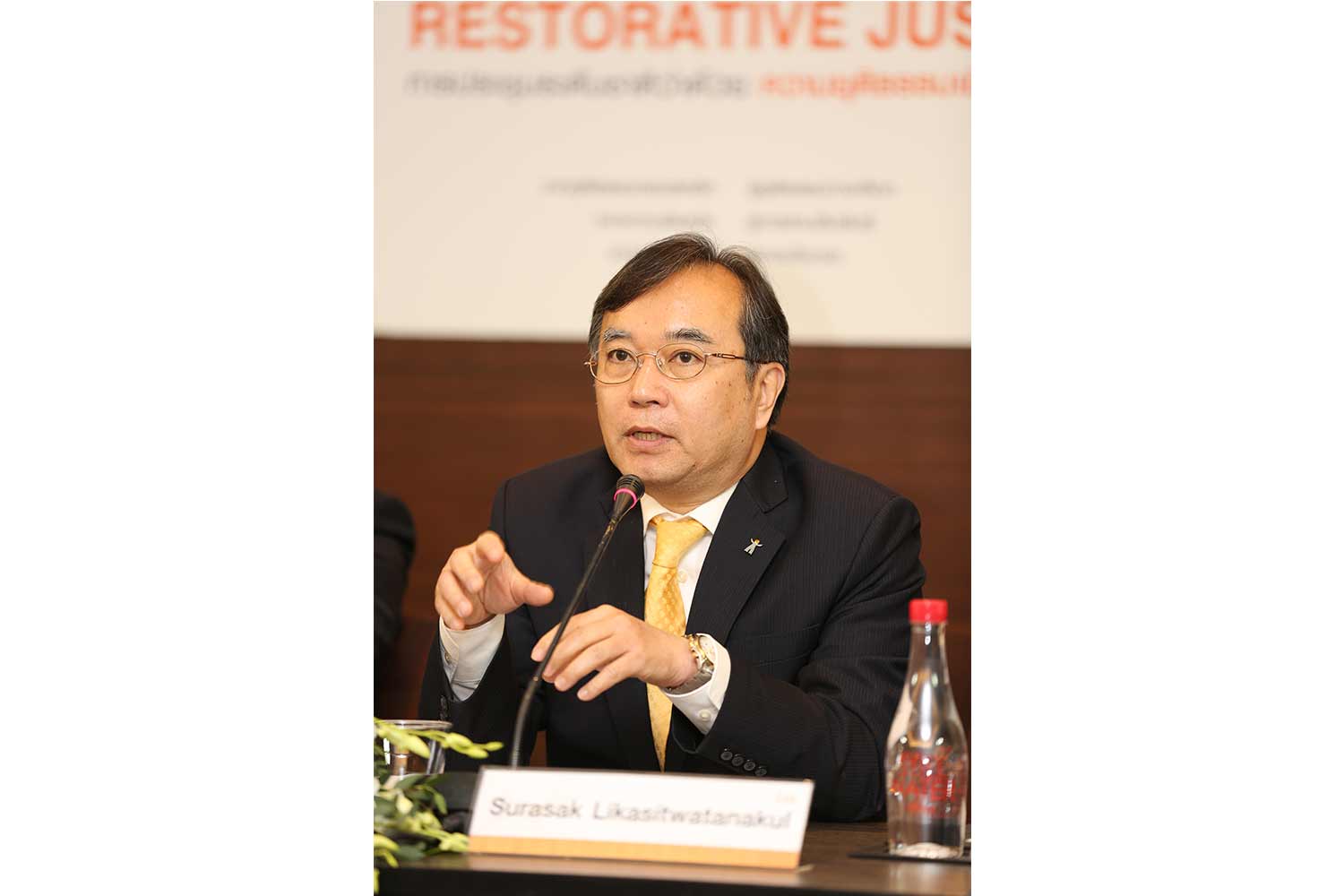 Prof. Dr. Surasak Likasitwatanakul, Chairperson of the Board added: “The worldwide concept has been shifting from Retributive Justice to Restorative Justice. In Thailand, Restorative Justice has had only a few opportunities for actual implementation. At an investigative level, there are permissions for conciliation in cases that don’t make much sense. Some theft cases cannot be resolved even when damages are minor. Embezzlement and fraud cases can be conciliated when the value of the damages is high. The recent enactment of the Mediation Act 2019 allows conciliation opportunities for cases involving sentences of not over five years’ imprisonment. Prior to ratification of the Mediation Act 2019, the criminal code allowed prosecutors to decline to press charges. However, the mechanism is complicated and only the Attorney-General can make the call not to press charges. The big problem is that prosecutors declining to press charges might raise suspicions as to their motive. Obviously, the change requires cooperation from every sector, so people in organisations must change as well.” 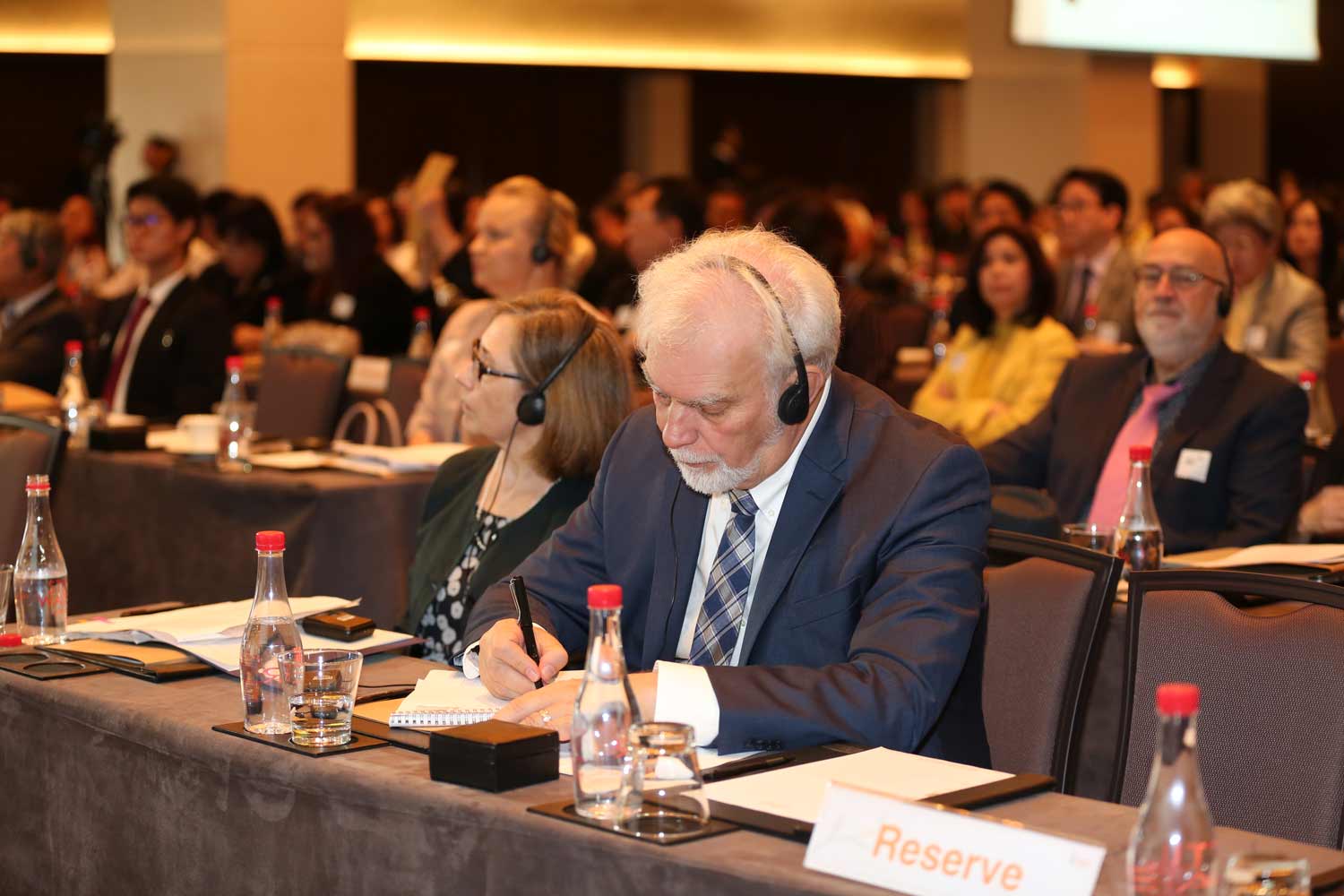 Also commenting on the matter was Mr. Wanchai Roujanavong, Senior Consultant Public Prosecutor and Thailand’s Representative to the ASEAN Commission on the Promotion and Protection of the Rights of Women and Children (ACWC) for Children’s Rights: “Thai society today focuses more on Retributive Justice than Restorative Justice. The result of this is the high number of inmates in our prisons, totalling some 360,000. In fact, we have the highest rate of imprisonment in ASEAN and the sixth-highest in the world. Meanwhile, Thailand’s Department of Corrections’ facilities are only built to accommodate 120,000 inmates. Having to take care of too many inmates, the Department of Corrections could not effectively provide programmes to rehabilitate the inmates. When they are released, their records as ex-convicts hold them back. There are also a lot of criminal cases in other countries but imprisonment is the last measure

some of them use. I would like to propose that in non-violent cases, to prevent convicts re-offending, Thailand uses alternative measures other than imprisonment. We should use Restorative Justice in cases where offenders are under 18 years old. Most youths committing crimes do so when their emotions are out-of-control. Youth offenders should make reparations with actions and in ways that are agreeable to victims.” 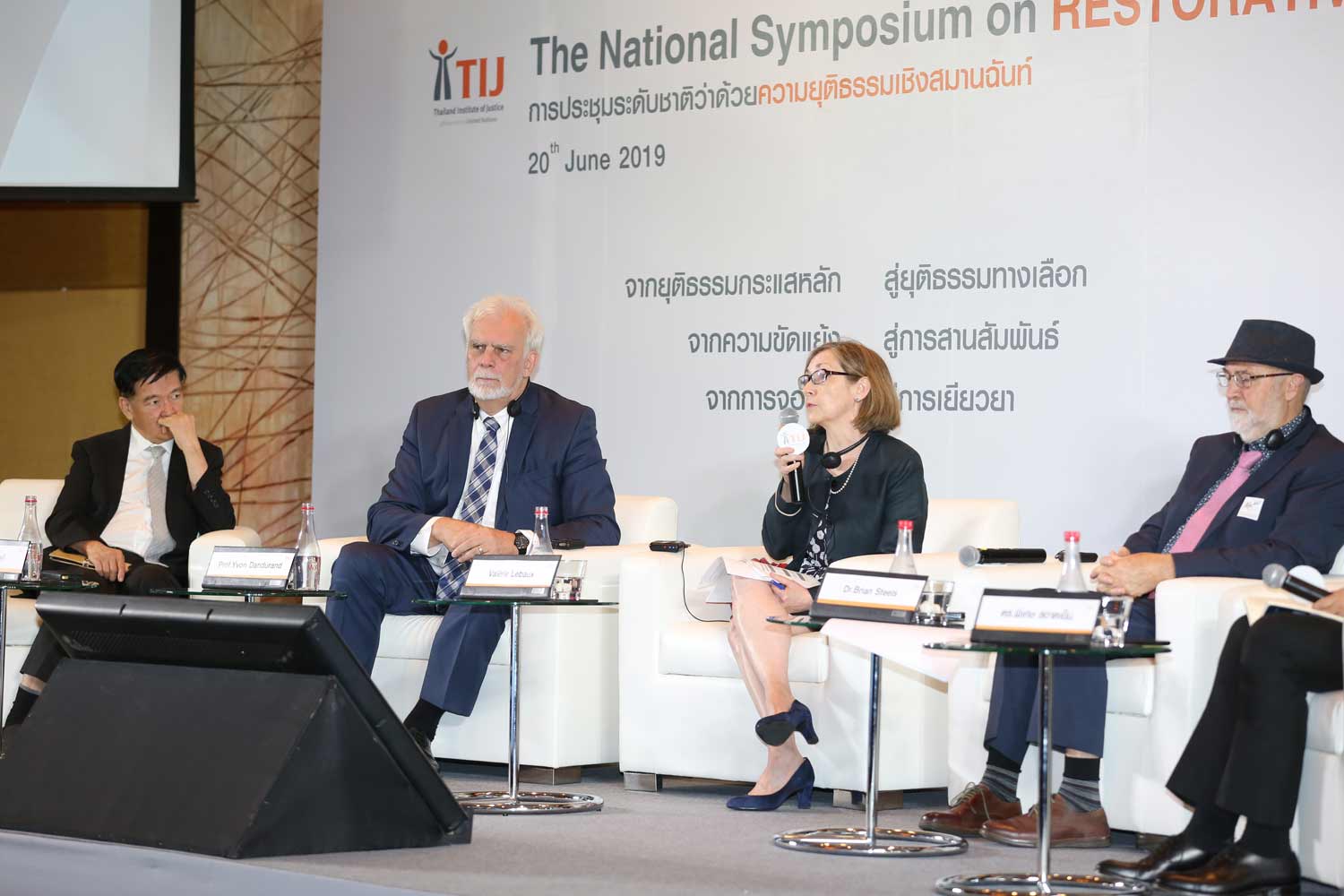 Ms Valerie Lebaux, Justice Section Chief, Division for Operations,  UNODC said: “Many countries face similar challenges in incorporating Restorative Justice Approaches into their criminal justice systems. Given that criminal justice is based on the retribution philosophy, there is an identification of guilt and retribution for that guilt. On the other hand, the Restorative Justice response focuses on the harm created by the criminal behaviour and on finding creative and flexible ways to redress that harm. Difficulties arise because of the differences in philosophy, concept and mindset in relation to criminal justice responses. As for the expectations of the United Nations, we want to raise awareness of this approach among the public and communities and the criminal

justice system. We would like to see Thailand explore and fully apply Restorative Justice responses within its legal system, legal context, cultural context, and traditions, as required to meet its specific needs.” 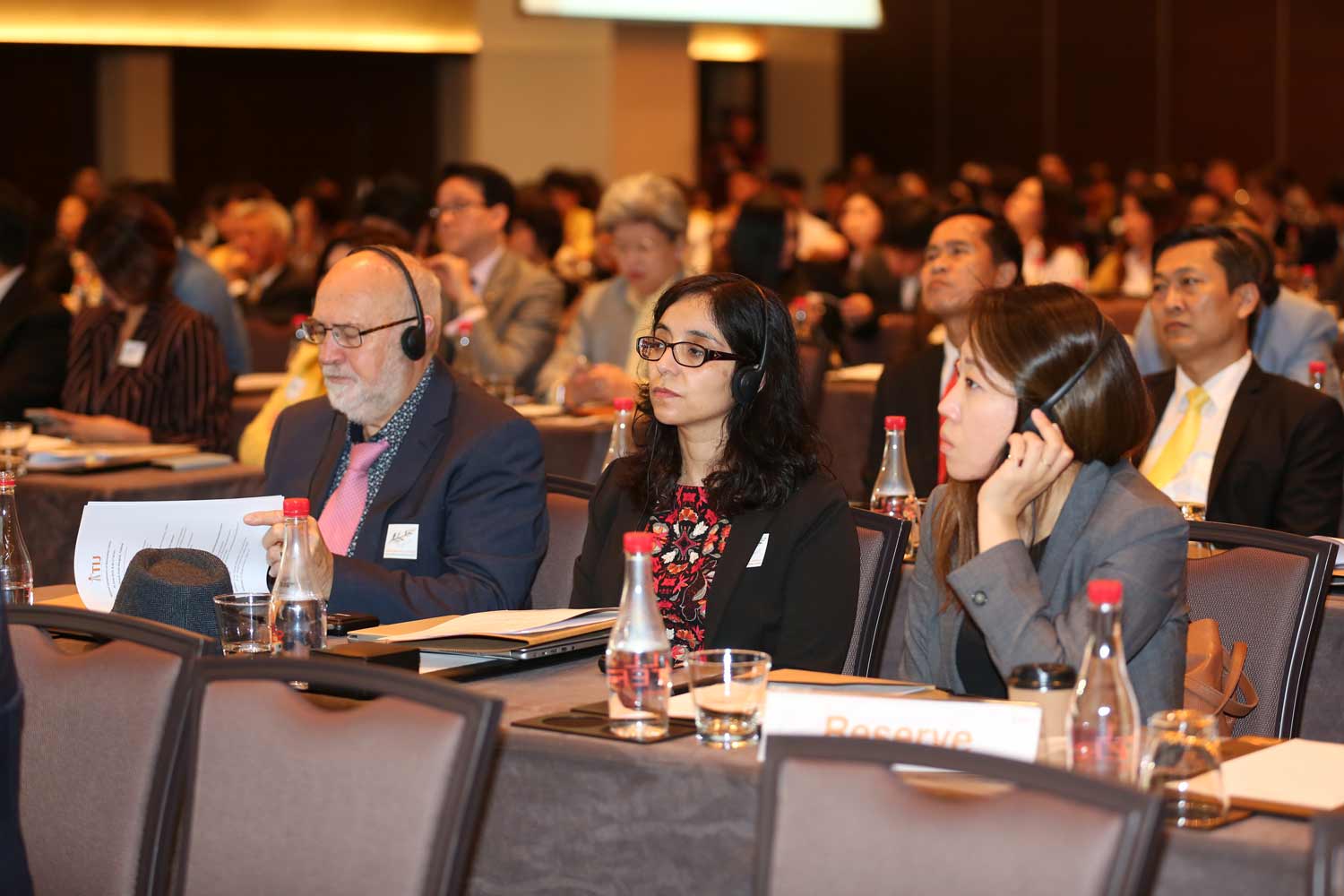 The Restorative Justice principle is not a new trend in Thai society because Thailand is a society of generosity and forgiveness, giving those who have been convicted the opportunity to make amends. With the cultural foundation and the community strength of Thai society, Restorative Justice can succeed in the Thai cultural context. Thailand can respond to the need to change and adopt a new civil and criminal justice model when law enforcement and policy-making forces get on board. The holistic approach whereby the whole of society applies Restorative Justice is vital to solving the problems. 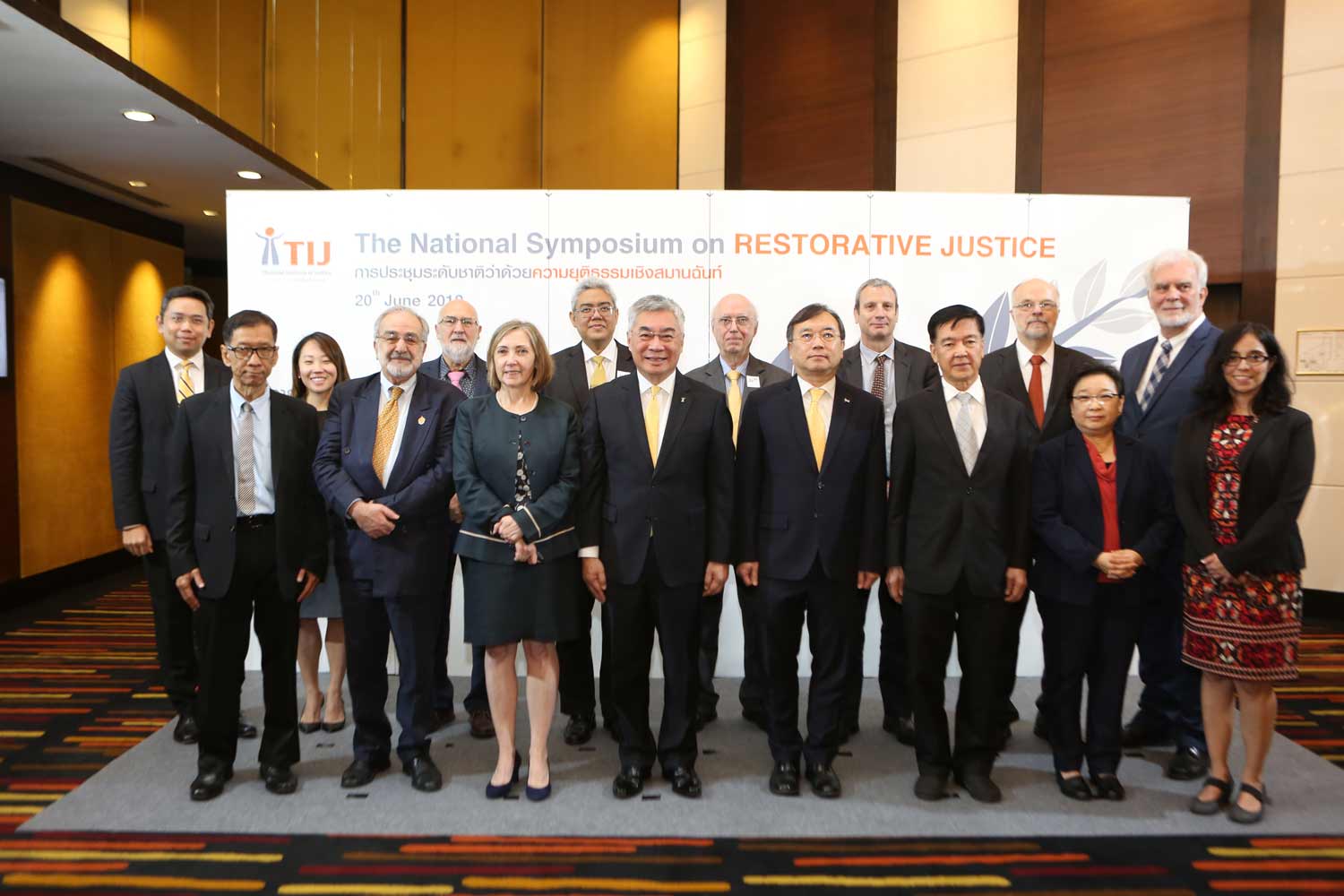