Developers looking at nearby opportunities, with Saphan Khwai attracting interest.

The development of Bang Sue Central Station, which will become Thailand's new rail transport hub when it opens in 2021, is having a significant impact on the property market in the areas surrounding it. 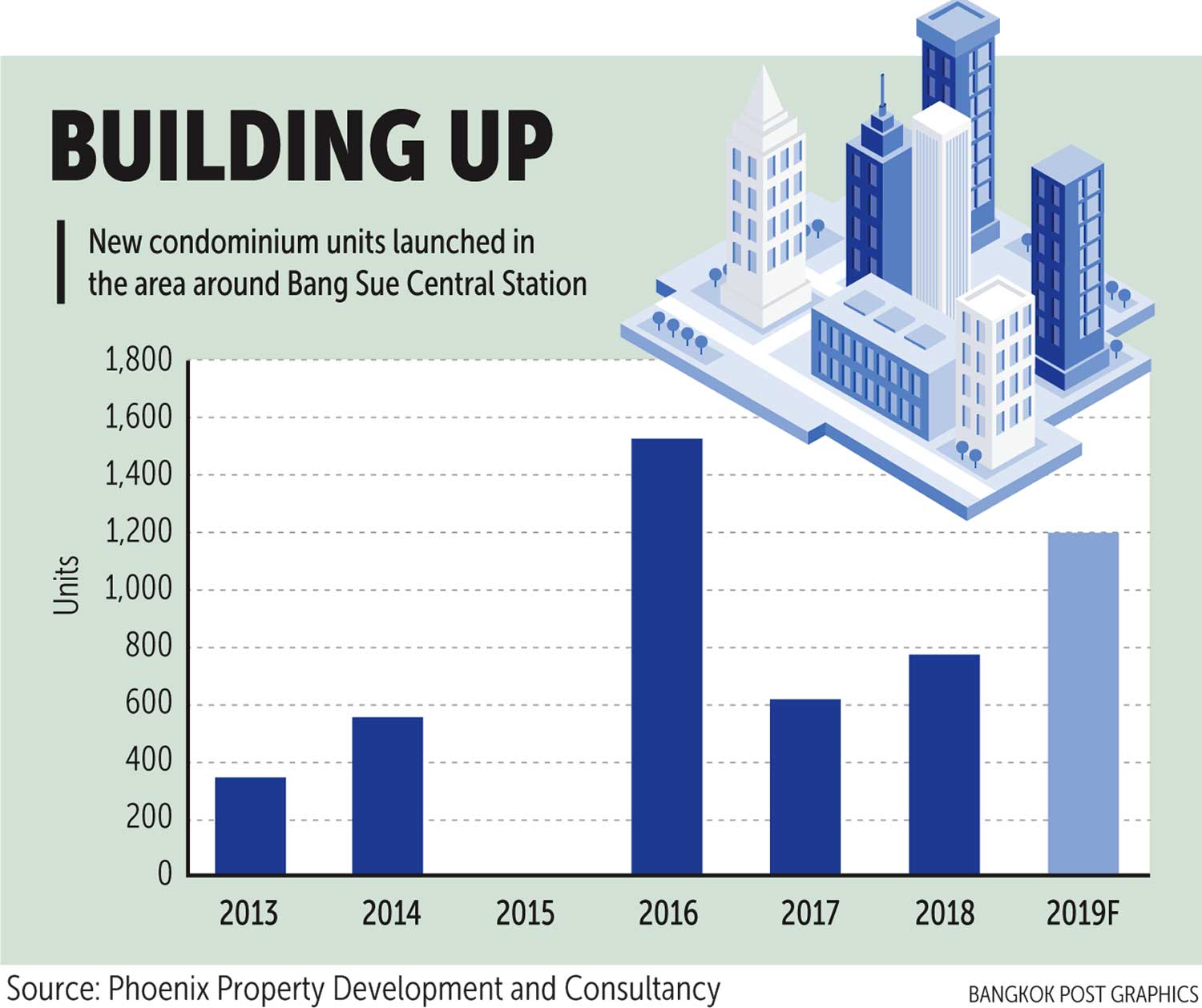 The station itself will have a commercial area that will serve as a magnet for travellers as well as others who live in surrounding areas. There will also be residential and hotel space and government offices.

Most of the land plots in the area around Bang Sue Central Station are owned by the Treasury Department and the State Railway of Thailand. Some of this land may be offered to developers on a leasehold basis if the state agencies can secure good terms.

Many new condominium projects are taking shape in the area around Mor Chit, Lat Phrao and Saphan Khwai skytrain stations as well as the Tao Poon MRT station. Land prices in all these areas have risen in the past few years, especially since the start of work on the Bang Sue complex.

The area around Saphan Khwai station has been particularly active since 2016, with prime land plots now selling for up to 1.3 million baht per square wah. There are 3,818 condo units in the area, with 1,200 planned to be launched this year.

The average take-up rate in the area around Saphan Khwai station is also high at 85%, with average selling prices of 130,000 to 135,000 baht per square metre. Units in buildings located adjacent to Phahon Yothin Road sell for 20-25% more than those in projects located farther down sois or small secondary roads.

Another notable development is a new mixed-use project by Sri Suppraj group close to the Saphan Khwai skytrain station, with office, retail and hotel space. Some old cinemas in the area are also being earmarked for renovation.

The area around the Mor Chit skytrain station has also grown in popularity. The market is still awaiting clarity on the Bangkok Terminal megaproject, which will feature a transport centre, hotel, office space and serviced apartments. It was first proposed 23 years ago, but languished for years because of legal and financial problems before being revived recently. Negotiations with the Treasury Department are continuing.

Singha Estate, the owner of Sun Towers, has also leased and bought more plots nearby for parking, a food centre and another office building.

Some new development projects on government-owned plots are also scheduled to be launched in the area this year or next.

These will add a lot of retail, office, condominium and hotel space in the coming years. But there has been little movement on some projects for a long time, while others are awaiting the opening of official bidding.