The government is expediting the Transport Ministry's mega-investment projects worth almost 2 trillion baht to stimulate financial flows and deal with anticipated volatility in the global economy next year. 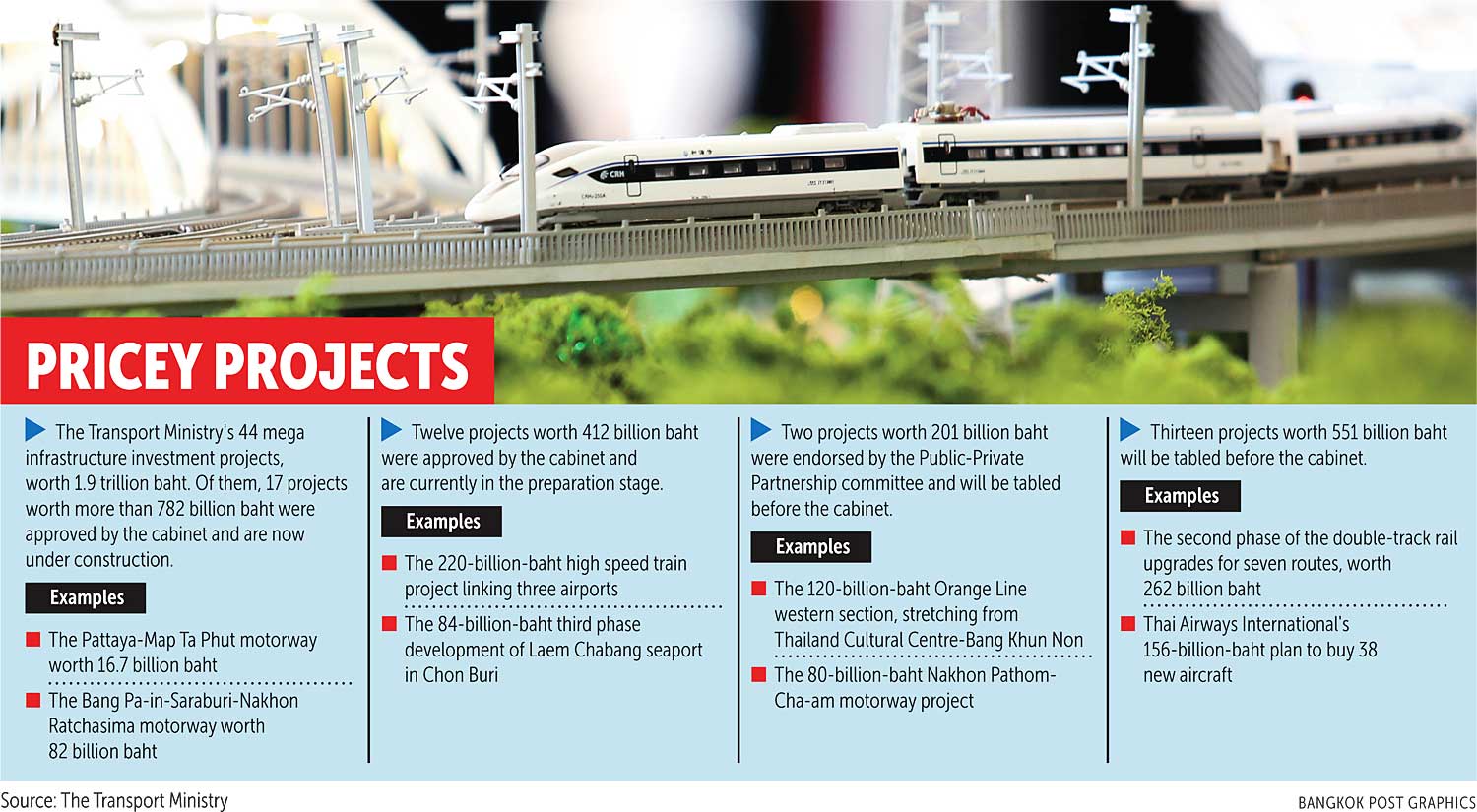 Kobsak Pootrakul, deputy secretary-general for political affairs to the prime minister, said the Transport Ministry's 44 projects worth a total of 1.94 trillion baht were discussed at yesterday's meeting of economic ministers.

The ministers hope to speed up the projects, which remain stalled.

The meeting was chaired by Prime Minister Prayut Chan-o-cha.

Massive investment budgets earmarked for the projects will help spur the country's economic growth and create jobs, said Mr Kobsak, who served as secretary to the meeting of economic ministers.

The Transport Ministry told the meeting that some projects face stumbling blocks, such as the 63-billion-baht Bang Yai-Kanchanaburi motorway project.

The project has made slow progress and is already two years behind schedule because of land expropriation issues.

The project is still waiting for the cabinet to approve the additional 8-billion-baht budget needed to enable the land expropriation for the 96km-long motorway, which faces stiff opposition from landowners because land prices have more than doubled since the project was approved by the government, according to the Department of Highways.

According to the department, the project is likely to affect more than 1,000 houses and 5,000 land plots across Nonthaburi, Nakhon Pathom, Ratchaburi and Kanchanaburi provinces.

The Department of Highways urged the cabinet to act quickly after 200 residents of tambon Bang Taku in Nakhon Pathom's Muang district demanded compensation for their expropriated land.

Although the compensation was approved by the government two years ago, the residents complained they have not received a single baht for their land, which they have already handed to the state.

Another project, the Nakhon Pathom-Cha-am motorway scheme, is awaiting a ministerial regulation on the construction of resting places along the route.

The prime minister has given special attention to solving the problems besetting these two projects, Mr Kobsak said. He added that the meeting also agreed in principle with the project to construct the Orange Line's 122-billion-baht western section, which will stretch from the Thailand Cultural Centre to Bang Khun Non on the outskirts of Thon Buri.

He said the meeting of economic ministers has made sure the project will not have any problems stemming from a lack of financial discipline and the ceiling on public debt.

At the meeting, the Budget Bureau proposed that the project be implemented under the budget for the 2020 fiscal year, which will start on Oct 1, to avoid problems related to financial discipline.

The Orange Line's western section project will then go before the main cabinet for consideration on Oct 1 after Gen Prayut returns from his visit to New York to attend the United Nations General Assembly, Mr Kobsak said, adding that the project is expected to be up and running by 2026.

The western section will link up with the Orange Line's eastern section connecting the Thailand Cultural Centre with Min Buri district, which is currently under construction.

Speaking after the meeting, Transport Minister Saksayam Chidchob said the Finance Ministry suggested that the government could reduce the cost of the project by taking responsibility for carrying out the project's civil work.

Mr Saksayam said the meeting has assigned Deputy Prime Minister Anutin Charnvirakul to hold talks with agencies involved next Wednesday to reach a conclusion on how the project will be implemented and how many passengers are expected to use the service, before submitting details to the main cabinet for consideration.

The Orange Line's 39.6-km western section will comprise 23 stations -- seven of which will be above ground, while the rest will be underground. Mr Saksayam also said that the ministers want projects that are financed by proceeds from the Thailand Future Fund to be finalised and signed as quickly as possible.