Shipments down 4% in August
Business

Shipments down 4% in August

Thai exports dipped 4% in August from a year earlier after an unexpected rise the previous month, falling prey to global economic uncertainty stemming from trade tensions and weak worldwide demand. 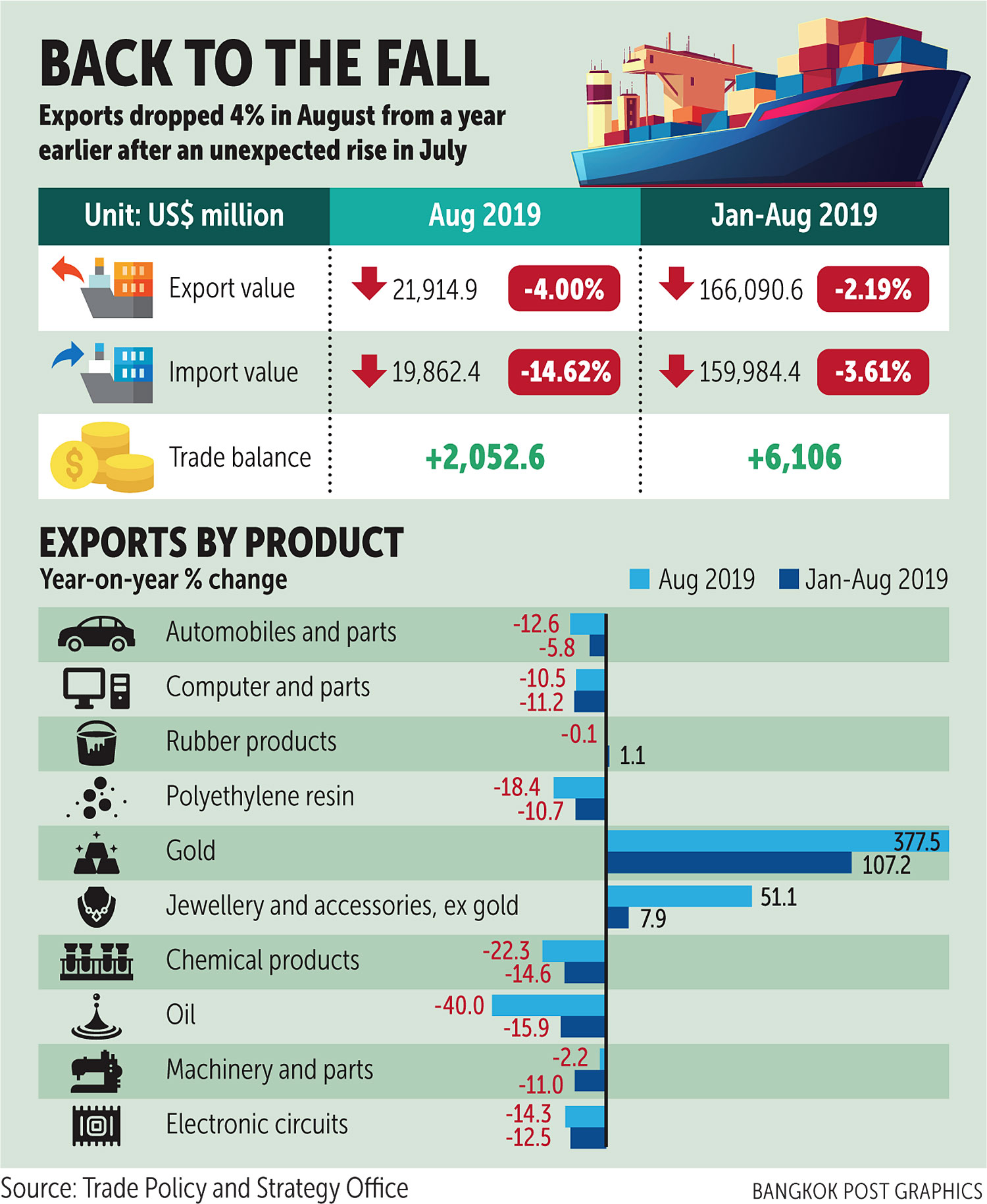 The Commerce Ministry yesterday said customs-cleared outbound shipments fell by 4% year-on-year in August to US$21.9 billion after increasing by 4.3% in July, the first rise in five months after contractions of 2.2% year-on-year in June, 5.8% in May, 2.6% in April and 4.9% in March.

The ministry said the increase in July was likely because of front-loading of imports to avoid the imposition of US tariffs starting on Sept 1.

Moreover, the uncertainty of trade disputes is clouding the global economy, causing a slowdown in most of Thailand's major trading partners, including Asean and South Asia. Falling global oil prices suppressed exports of oil-related products, and an oversupply of agricultural products in the global market, as well as baht appreciation, are still downside risks for Thai shipments, the ministry said.

Shipments of agricultural and agro-industrial products fell by 4.4% in August to $3.59 billion. Oversupply in the world market and baht appreciation are key factors suppressing exports of major agricultural products, namely rice (-44.7%), cassava products (-25.3%) and rubber (-7.2%).

Exports of some products still expanded, such as fresh, frozen and processed fruits (+26.8%), fresh and frozen chicken (+5.6%), and wheat products and other prepared food (+13.5%). In the first eight months of 2019, agricultural and agro-industrial product shipments shrank by 2.1%.

Pimchanok Vonkorpon, director-general of the Trade Policy and Strategy Office, said various challenges, namely the global economic slowdown, the prolonged Sino-US trade dispute and baht appreciation, are casting a shadow over Thai exports for the rest of 2019.

Ghanyapad Tantipipatpong, chairwoman of the Thai National Shippers' Council, said it will be hard for Thailand to record export growth this year. She urged the government to search for new export markets and rev up trade agreements as fast as possible to boost the country's shipments.