It's unlikely the government will move, but development of regional areas could help unclog Bangkok.

The prime minister says his suggestion to ease overcrowding by moving the capital is merely an idea at this stage. Panupong Changchai

The idea of moving Thailand's capital to another province has resurfaced after the country's leader, perhaps unintentionally, told a crowd about two approaches for possible relocation.

The plan echoes the recent announcement by the Indonesian government that it will move its capital from Jakarta, located on the island of Java, to the province of East Kalimantan on Borneo.

Previous Thai regimes have floated the idea of capital relocation, with the Thaksin Shinawatra government studying a possible move to Nakhon Nayok, a province about 100 kilometres northeast of Bangkok.

There were also studies regarding relocation of government offices to Chachoengsao, a province some 80km east of the capital.

But those plans failed to materialise, leaving many with doubts about how such an idea could morph from fiction to reality.

Thosaporn Sirisamphand, secretary-general of the National Economic and Social Development Council (NESDC), said the prime minister has not asked the agency to conduct a serious study on capital relocation.

"Capital relocation is a big issue and needs serious cooperation from various agencies," he said. "I think Gen Prayut just threw an idea out to the public on how to tackle traffic congestion in Bangkok."

Speaking at a seminar called "Connecting Thailand With the World", hosted by the NESDC, the prime minister said one possible solution to overcrowding in Bangkok would be to move the capital.

He said there are two possible approaches to such a move. The first is finding a city that is neither too far nor too expensive to move to. The second is to decentralise urban areas to outer Bangkok to reduce crowding.

But Gen Prayut insisted that moving the capital is merely an idea at this stage, with a lot more research needed to determine feasibility and the economic and social impact that a move might have.

Mr Thosaporn said a study on how to reduce traffic congestion in Bangkok sounds more viable. 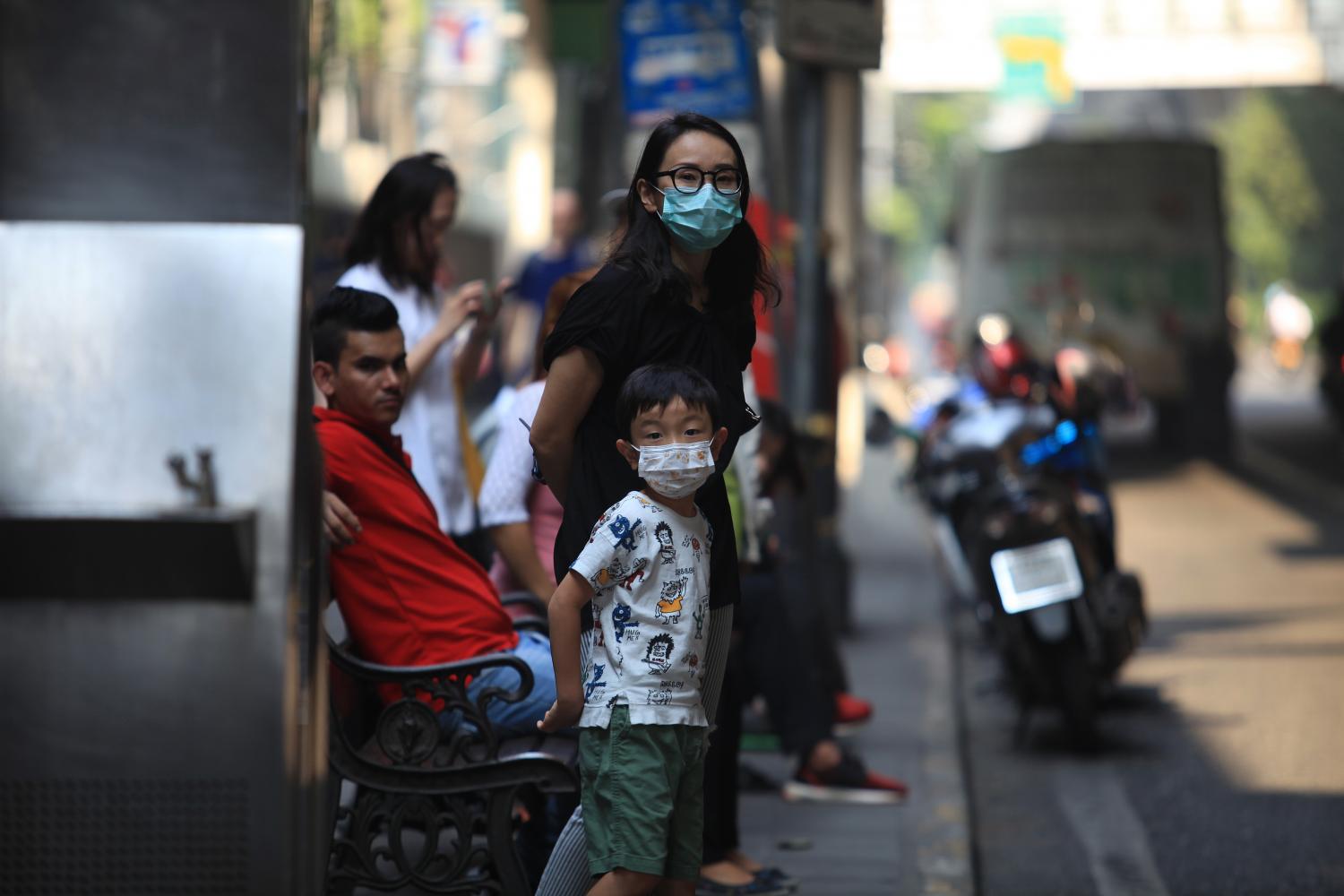 Residents are resorting to face masks as Bangkok's air quality worsens and poses a threat to health. Somchai Poomlard

Regional development is a key solution to the overcrowding in Bangkok and to help generate income for regional areas, he said.

The Southern Economic Corridor is next in the pipeline, with important infrastructure projects covering roads and double-track rail along the Gulf of Thailand, Mr Thosaporn said.

The government also aims to offer incentives for private investment in tourism projects, he said.

Anek Memongkol, the NESDC's deputy secretary-general, said the government may need to design a slew of new measures to reduce traffic congestion in big cities.

More development in second-tier provinces is vital to reducing congestion in urban areas, he said.

While Bangkok is the economic centre of Thailand, in 4-5 years the eastern seaboard will overtake Bangkok to become the new economic area once the EEC development is complete, he said.

Southern areas will remain a significant base for tourism, but more industrialised areas will be developed under the Southern Economic Corridor initiative.

The Northeast is a longer-term project for development as an economic hub, once the construction of the Thai-Sino high-speed rail from Nong Khai to Bangkok is completed.

The government is being urged to support the development of major provinces in each region nationwide instead of thinking about moving the capital out of Bangkok, said Issara Boonyoung, honorary president of the Housing Business Association.

He said it's quite impossible to relocate the capital from Bangkok, which is already the centre of too many things.

"The saying 'Bangkok is Thailand: Thailand is Bangkok' is not wrong, as our country is mono-centric," Mr Issara said. "Bangkok is where the Grand Palace, head offices, world-class hospitals and the best universities are situated."

Relocating all of those to a new capital would be hard, though building a new capital with proper city planning is easy, he said, adding that the government should instead promote the development of major provinces in each region.

"Thailand should be poly-centric, supporting the growth of key provinces that complement Bangkok," Mr Issara said. "The EEC is an example, which should shift future important businesses from Bangkok."

To drive development in those provinces, the government should link them with transport networks such as east-west and north-south corridors, Mr Issara said.

"Physically, Bangkok has a lot of problems. It is a flood-prone area, but we can prevent it," he said.

Many state agencies are already in Bangkok's outskirts and neighbouring provinces, as the government wanted to reduce traffic congestion.

"This is a good idea because it will create nodes and towns in locations in neighbouring provinces," Mr Issara said.

Tritecha Tangmatitham, managing director of SET-listed developer Supalai Plc, downplayed the idea of moving the capital out of Bangkok, saying it would take a long time to become a reality.

"Serious talk [among relevant parties] on this idea would take at least five years to start," he said. "Several governments in the past sparked this idea, but it has never happened."

If the idea does become a reality, the government should allow local authorisation so that any permits issued in Bangkok do not require reauthorisation in the new capital, Mr Tritecha said.

Chukwan Nilsiri, director of the city planning division for the Bangkok Metropolitan Administration, said it would be easy to design urban planning for a new capital, starting from zero, but very difficult to move the capital out of Bangkok.

"Bangkok has invested trillions of baht to develop transport networks, and it would be difficult to reinvest that amount for new networks in a new capital," she said. 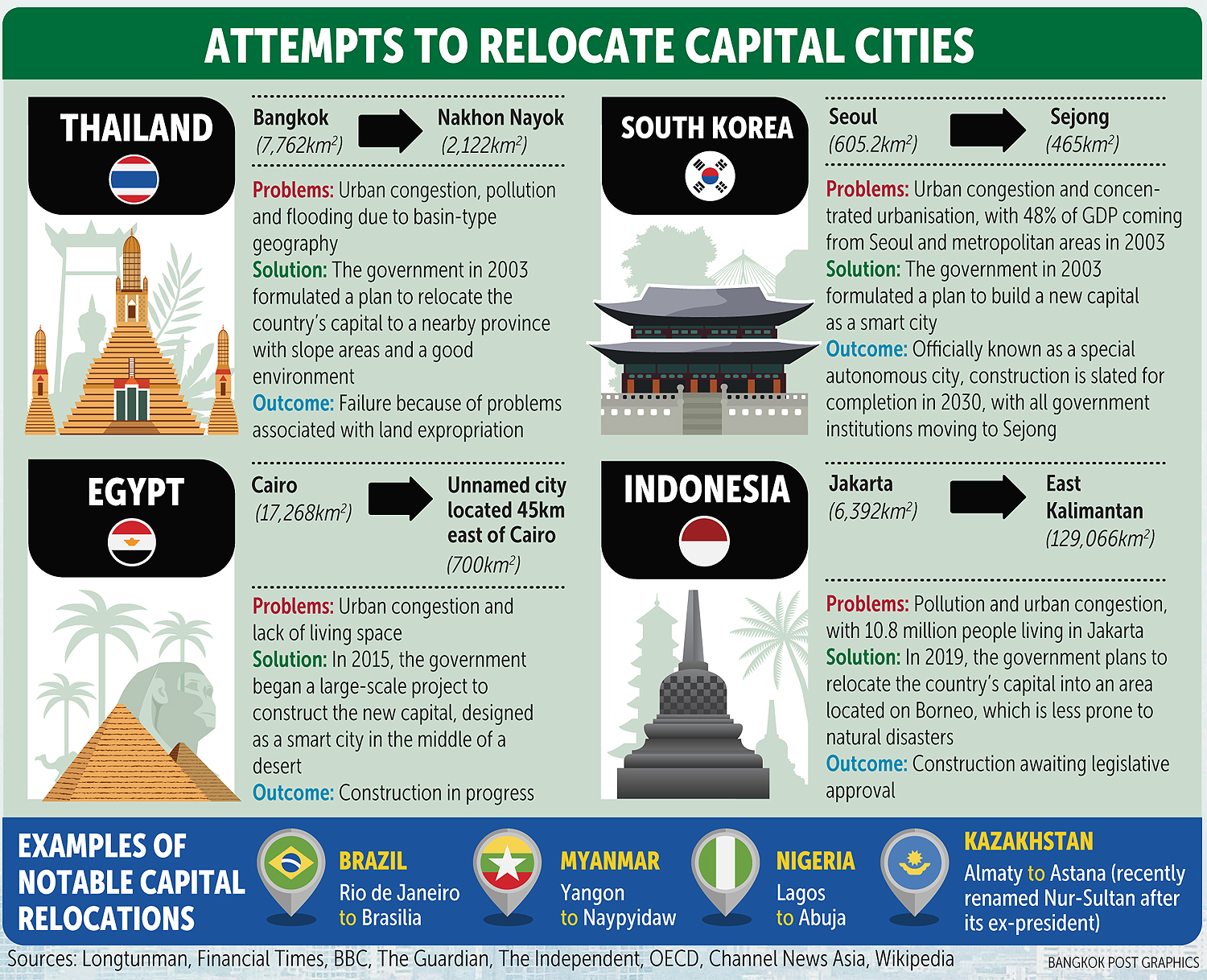