The precious metal's price has shot up in 2019, and many analysts see a continued safe-haven appeal amid trade disputes and the wobbly global economy.

Stacks of gold bars at the Argor-Heraeus plant in Mendrisio, Switzerland.

Gold prices have leapt nearly 18% this year to exceed US$1,500 an ounce, the highest level in over six years, raising questions as to whether the precious metal's hot streak is nearly over.

Many investment firms remain bullish on gold, and they are betting that the price has scope to reach $1,600 in the foreseeable future as investors seek a refuge in safe-haven bullion to hedge against global economic doldrums and wild market swings.

In recent months, concerns that the US economy is slipping into recession again have deepened with the emergence of an inverted yield curve -- a phenomenon in which short-term yields climb above longer-dated ones. The flare-up of retaliatory tariffs between the world's two biggest economies has also fanned fears.

Goldman Sachs made headlines in August, predicting that gold prices would climb above $1,600 an ounce in the next six months as the US-China trade dispute boosts gold's appeal as protection for one's wealth.

"Gold ETFs have recently built momentum almost as strong as in 2016, and we believe that can be maintained in the short-term," the investment bank said in a note.

Meanwhile, Bank of America Merrill Lynch analyst Michael Widmer and Citigroup have painted an even rosier picture for gold, saying the metal could hit a record high of $2,000 in the next two years.

Bullion holdings in ETFs have climbed to their highest level since April 2013, according to Reuters.

Mr Widmer said the recent dovish tilt by central banks and increases in negative-yielding assets are factors that could sustain the rally, while Citigroup named positive drivers such as the rising risk of a global recession and the likelihood that the US Federal Reserve will slash its benchmark rate to zero.

In the event that the US and China's tit-for-tat trade row continues, it will deal a blow to countries in both nations' supply chains, including South Korea and Taiwan, as well as stock markets around the world, Mr Navin said. 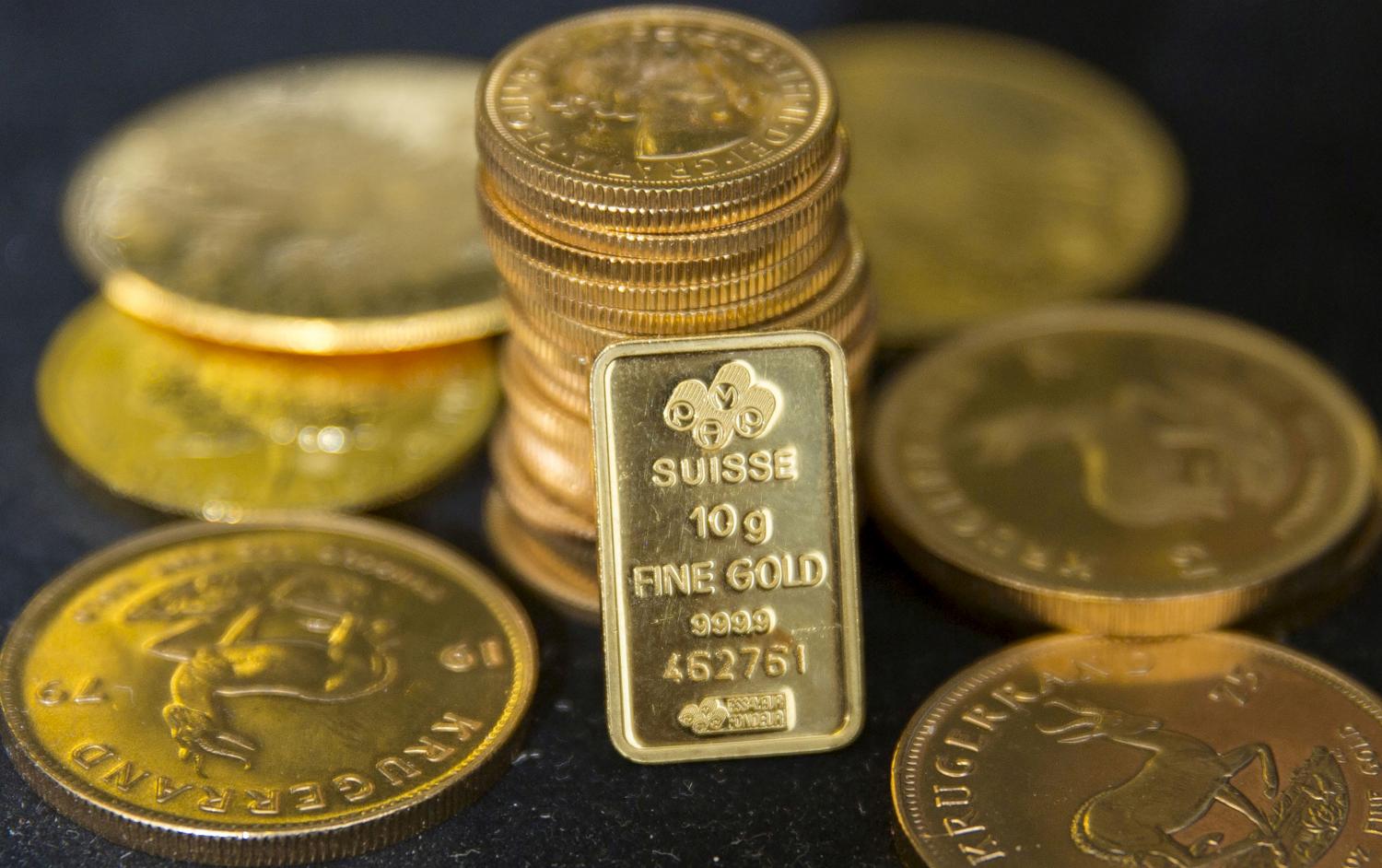 Wall Street is expected to tumble sharply if US listed companies fail to beat a 10% forecast for net profit growth in the three months to September, he said.

Nuttapong Hirunyasiri, managing director of MTS Gold Futures, is upbeat on the gold outlook, estimating that bullion will end the year at $1,600 an ounce.

The gold rally gained momentum after the first rate cut by the US central bank since 2008 in July, while the inverted US yield curve, which suggests bleak prospects for the world's largest economy, has bolstered safe-haven demand.

Consistent with the global price, the domestic price of gold bullion with 96.5% purity has surged nearly 11% to 21,800 baht per baht-weight.

Thailand has become an Asean hub and Asia's third largest after China and Japan for gold trading, and Thai gold traders are among the big players in the precious metals market, Mr Nuttapong said, noting that Southeast Asia's second-largest economy has shipped gold bullion to other Asian markets such as Hong Kong and Singapore.

Thailand's gold bullion exports in July surged 400% from the previous month and were up 7.3% on the same period last year. Gold prices should keep rising if rate cuts continue and the global economy slows or enters recession.

Apart from physical gold, investors can gain exposure through other forms like paper gold, for which gold futures and gold online (GO) futures are now available at the Thailand Futures Exchange (TFEX).

GO, for which 99.5%-purity gold is the underlying asset, is quoted in the baht-denominated currency per ounce. A contract is equal to a 300 multiplier reference price per ounce. Trading in GO futures, launched in November 2018, is brisk with an average 15,000 contracts per day or about 50% of total gold futures products traded on the TFEX.

Saharat Chudsuwan, head of marketing and wealth advisory, mutual and private fund business at Tisco Asset Management, said gold is one of several alternative assets that investors need to hold in their investment portfolios at the moment.

Typically, alternative investments should be about 5% of the portfolio, he said, while REITs and property funds should account for 20%, and equity or fixed income should make up the rest, depending on the risk aversion of each investor. 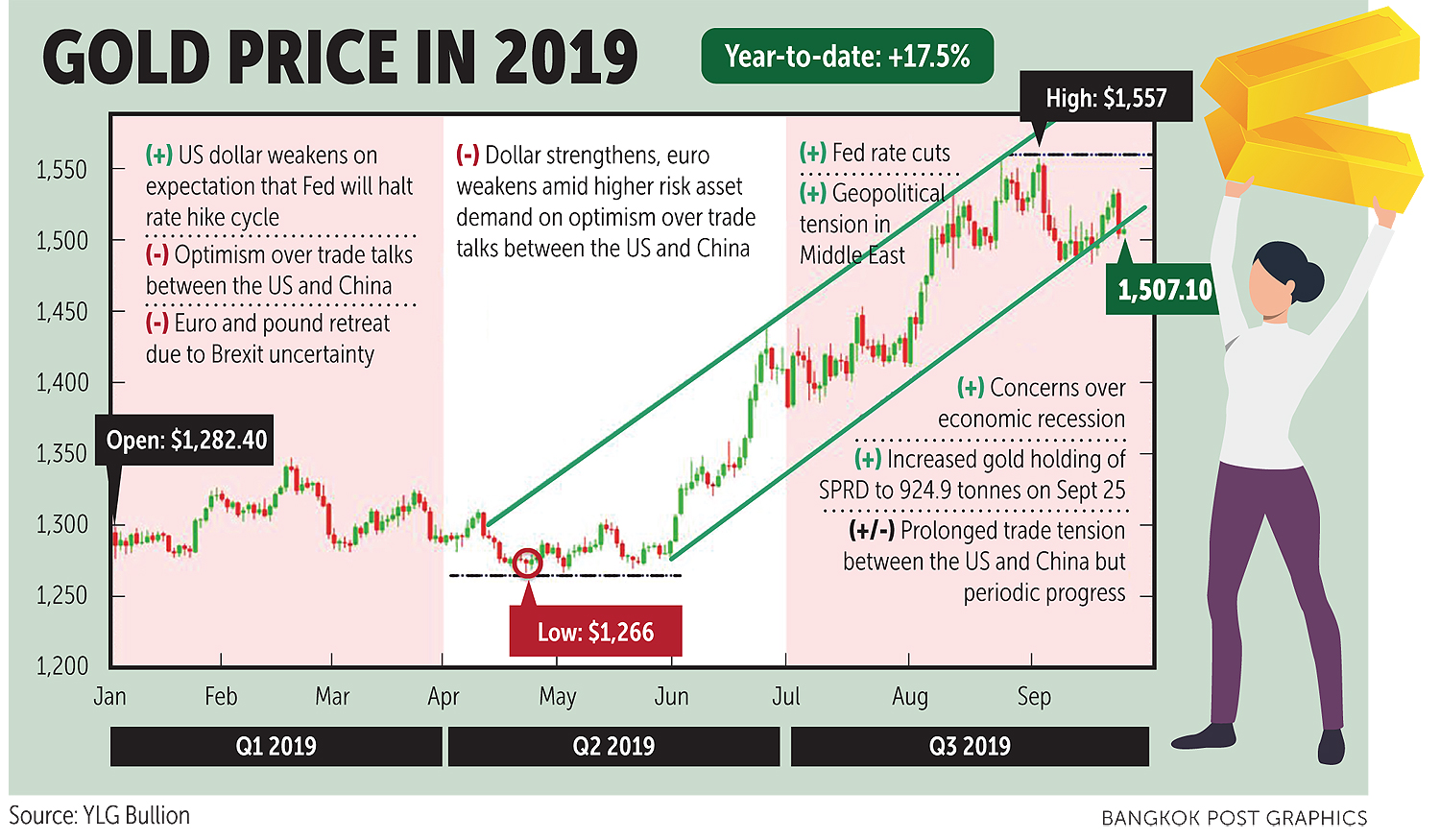 "We don't recommend investors allocate a high portion to gold, due to its high price," Mr Saharat said. "Moreover, price is the only source of profit from gold, unlike REITs or property funds which enable investors to generate profit from both yield return and capital gains from price increases."

He also recommends shunning investment in sectors related to global volatility such as oil, petrochemicals and exports to US and European markets.

Varut Rungkhum, head of research at YLG Bullion & Futures Co, said a price correction is looming for gold soon, given positive news on the US-China trade talks. But he remains bullish that gold prices will continue rising in the medium term, as further monetary easing is expected from central banks worldwide to combat sluggish economic growth and the dollar has a downside bias against other currencies.

Based on trends of global rate cuts and the greenback's depreciation, gold is predicted to reach $1,600 an ounce this year, with a support of $1,492, Mr Varut said.

Sombat Narawuttichai, president of the Investment Analysts Association, recently recommended that investors keep 30-40% in local shares, 30% in bonds and fixed-income funds and 30% in foreign equities. Gold and REITs should fill any remaining space. 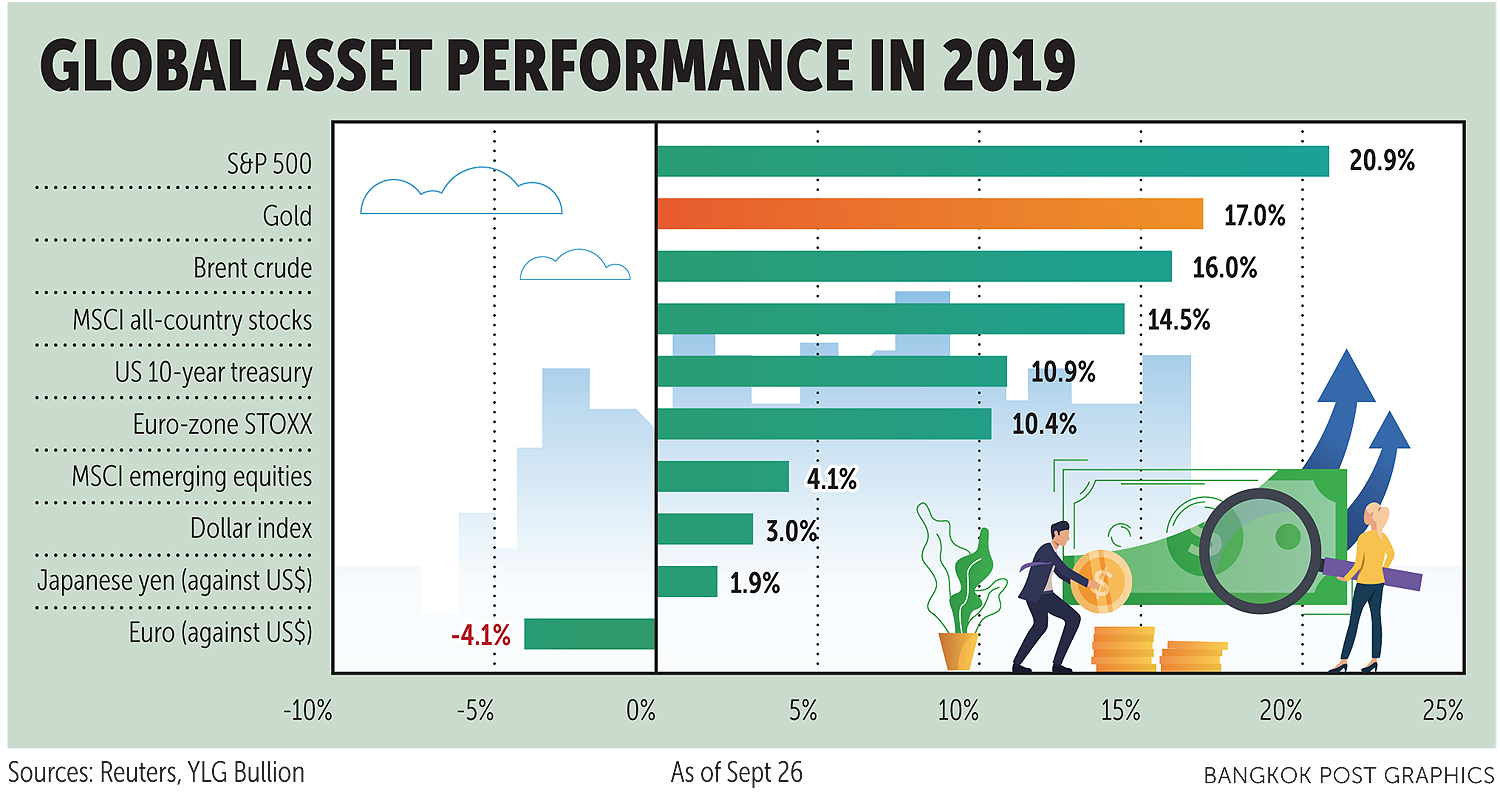