Thailand aims to leverage its prime location and the e-commerce boom to become a delivery hub, writes William Hicks

Increasing cross-border trade and the rapid rise of the e-commerce industry are bolstering the growth of Thailand's logistics sector, as are ambitions to make the country the region's delivery hub.

From 2016 to 2018, Thailand went from 45th place to 32nd on the World Bank's Logistics Performance Index 2018, making the country second in Asean, behind only Singapore, and seventh in Asia.

Based on geographical convenience, Thailand has attracted the interest of China, with some Chinese e-commerce firms considering Thailand a gateway to Asean and the Greater Mekong Subregion.

This attention, along with increased government funding from the Thailand 4.0 initiative and the Eastern Economic Corridor project, has led to big investments in road, rail and air infrastructure, aiding in the rapid growth of logistics.

It all means a considerable uptick in competition for corporations trying to cash in on the growing sector. While Kerry Express remains the top local player in terms of parcel deliveries, insurgent China-backed companies and massive global logistics titans like DHL make for stiff competition.

"As other regions have experienced, the continued expansion of the e-commerce market will continue to drive the development of the logistics sector in Thailand," said Adam Bell, head of advisory and transaction services for industrial and logistics at CBRE Thailand. "When you look at the data on Thailand's online retail sector in comparison to more developed markets in the West, there is significant growth still to come."

Thailand's logistics industry is centred on the Bang Na-Trat Road area, which is seeing the highest demand for real estate for factories and sorting centres, with easy access to highways going east, west, north and south.

"The prime area runs from around KM18 to KM23 on both the inbound and outbound sides of Bang Na-Trat Road," Mr Bell said. "This is the prime area for logistics due to the zoning permitting large warehouse development and being one of the main routes between Bangkok and the main deep-sea port and its relative proximity to Suvarnabhumi International Airport."

According to CBRE's research, Thailand will most likely see an increase of 4,000 square metres of demand for e-commerce logistics space for every 1 billion baht in e-commerce sales.

"Alibaba wants to set up Thailand as a hub for Southeast Asia, giving Thailand a big advantage compared with other countries in the region," said Charlie Tansiri, senior adviser at Flash Express. "Alibaba thinks there are huge opportunities in Thailand and wants to support the delivery sector."

Flash Express is a relatively new Thai-owned logistics company, founded in 2017, with a Chinese partner and funding from Alibaba and a few other Chinese companies.

"The competition is still quite high because Thailand is a large part of the Asian economic community and demand is still growing," Mr Charlie said. "Even as companies take up market share, we remain competitive due to our edge from free pickups and deliveries 365 days a year."

Chinese logistics company Best Inc also recently began operations in Thailand. The company, founded in Hangzhou in 2007 and funded by Alibaba, began deliveries in Thailand late last year, boasting that it offers the lowest China-to-Thailand delivery rates. Best has a direct relationship with Lazada, the most popular e-commerce site in Thailand and a subsidiary of Alibaba.

Best Express, as it is called in Thailand, began operations in January and plans to expand throughout Southeast Asia in three years, using Thailand as a launch pad. Laos and Cambodia are being looked at as the next markets to enter. While the company has remained relatively low-key, it's planning an official launch in November.

"When entering a new market, we want to have strong local partners," said a representative for Best Express. "We operate under a franchise model and have 80 local partners, but we provide sorting stations and operate four factories in northern, western and eastern Thailand."

Even as new firms and foreign investment move into Thailand, Kerry Express remains the market leader in terms of parcel delivery.

The company began operating in Thailand in 2006 and has 23,000 full-time employees, supplemented by a contingent of part-time and freelance workers, while operating 1,300 distribution centres over 10 "megahubs" and offering more than 10,000 service points where customers can drop off packages.

"Kerry operates deliveries through a 'hub and spoke' model with all parcels moving through a centralised hub and passing through the hands of at least seven people before arriving at their final destination," said Alex Ng, managing director of Kerry Express Thailand.

"We are like the BTS, like a train service," he said. "We have a massive delivery network, and if you have a bigger network you can be faster and cheaper and develop technology to make sure we are more punctual."

He said deliveries have "increased like crazy" in the past few years amid the rise of e-commerce, driving demand for storage space and other facilities. Demand has been pushed not just by large e-commerce sites like Shopee and Lazada, but also by small-scale "social merchants" selling their products on Facebook and other social media platforms.

"Kerry created this demand," Mr Ng said. "Before we came along, it took a long time to deliver parcels, so we built the infrastructure to make e-commerce quick and reliable."

As far as competition, Mr Ng acknowledges that the market is crowded, but he maintains that Kerry is striving to compete with other companies and with Kerry's own track record to continually make deliveries faster and cheaper. 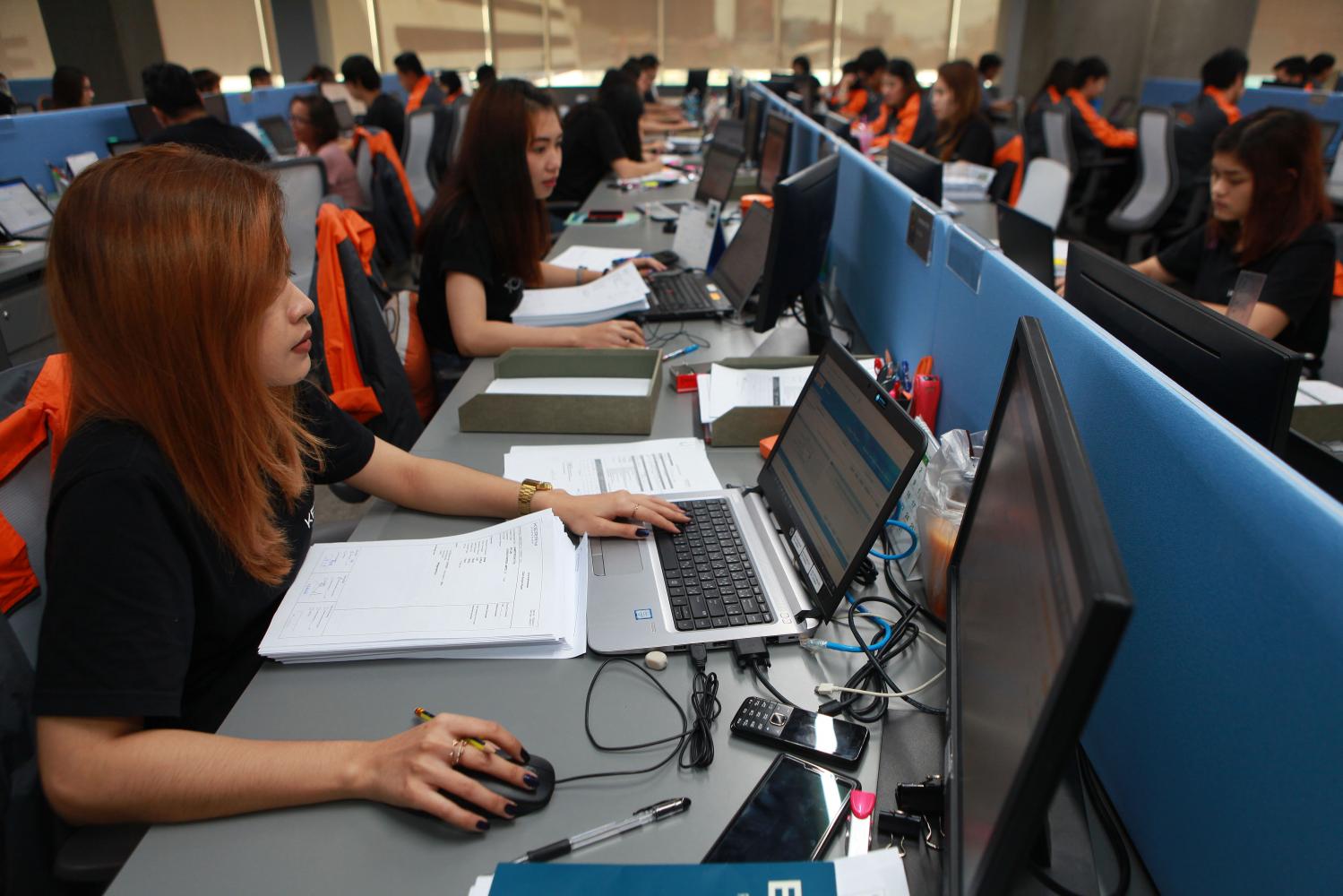 BELOW  The working environment inside Kerry Express, the market leader in Thailand in terms of parcel delivery. Somchai Poomlard

While Kerry dominates parcel delivery, German-based DHL is the top player in terms of logistics globally.

DHL sees Thailand as a key market within Asia, with its own internal research, the Deutsche Post DHL Global Connectedness Index (GCI), ranking Thailand 25th out of 169 countries and territories worldwide for connectedness and sixth for trade connectivity.

"This is a positive indicator for Thailand's ability to tap the tremendous potential of its connectedness," said a DHL representative. "Our global network comprises more than 220 countries and territories and makes us well-placed to boost the trade connectedness in Thailand and help local businesses expand into the international trade arena."

The rep identified four main trends in the logistics industry: booming mobile and e-commerce, digitalisation, globalisation and a greater emphasis on sustainability.

While increased cross-border trade, e-commerce deliveries and advancing technology will serve to boost the already-booming e-commerce industry, consumer demand for sustainability may prove a challenge to a sector reliant on single-use packaging and fossil-fuel-powered delivery vehicles.

"Customers are increasingly demanding sustainable logistics solutions to minimise the impact of their supply chain on the environment, in line with Deutsche Post DHL Group's Mission 2050 sustainability strategy that aims to reduce all logistics-related emissions to net zero by 2050," the representative said.

"We are pushing through several programmes, including green fleets and facilities, training programmes for our staff to think and act sustainably, exploring alternative modes of transport [such as drone delivery] for last-mile delivery."

"The Eastern Economic Corridor is the growth engine for the economy now and in the future," said Russell Reed, managing director of UPS Thailand and Vietnam. "In terms of export growth, it is driven by key industries located in the area."

He said the government's Thailand 4.0 strategy of investing in technology sectors like robotics and aerospace will help solidify Thailand's position as a global hub within the region.

UPS's strategy is to focus on cross-border shipping, especially air shipping. The company is also eyeing the B2B (business-to-business) e-commerce market, which actually makes up double the B2C e-commerce trade in Thailand without getting nearly as much attention.

Each company approached for this article said it was almost as much of a tech firm as a logistics one. Companies must offer mobile apps and real-time updates to appeal to today's tech-savvy consumers.

In a sector with players locked in competition to be the cheapest and fastest, any bit of technological advancement applied to supply chains and work structure could mean a competitive edge over rivals.

Best Express purports to have one of the largest R&D departments, doing research in AI, machine learning and robotics in order to scale up business to move greater volumes at cheaper costs. Kerry is confident in its proprietary system to monitor deliveries and provide updates to customers, while DHL is investing €2 billion to digitise its business worldwide.

And UPS recently was the first delivery company to get approval by the US aviation regulator to operate drone delivery flights, which it will test out with deliveries on a medical campus in the US, a major milestone towards what could be the future of small package deliveries.

"Thailand's logistics business in the future will need to improve more on automation and efficiency," said CBRE's Mr Bell. "It is hard to forecast what technology could be implemented in logistics properties at such an impressive rate of technological advancement that we are seeing in the world, but Thailand will need to keep up with the trends to compete in the region."