Condominiums in Hua Hin and Cha-am have bright prospects with sales near the beach reaching 81%, according to a Plus Property survey. 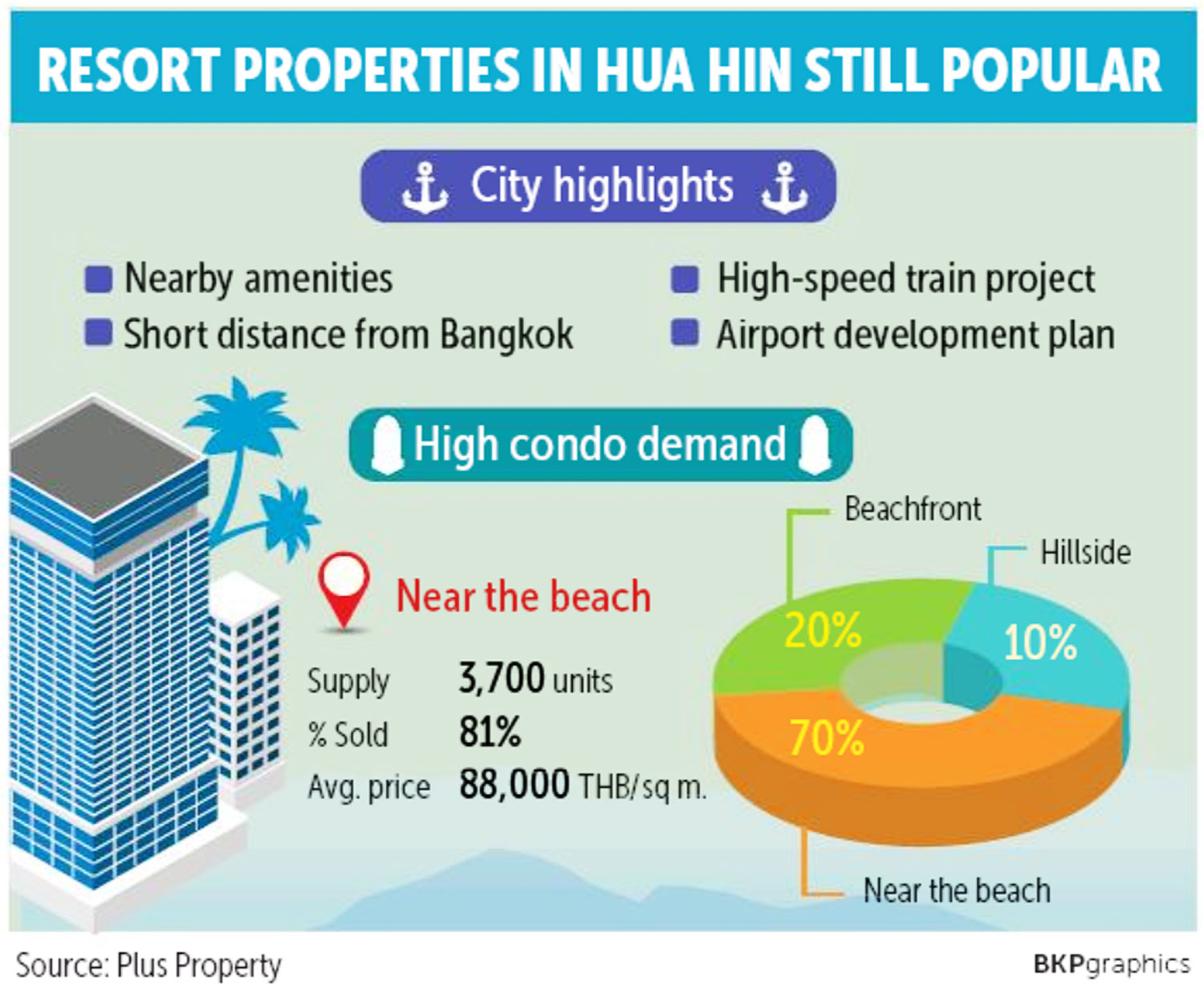 “Some 3,700 units or 70% [of the condos for sale during the survey] are from projects clustered near the beach. The zone has the highest sales ratio of 81%, with an average sales price of 88,000 baht per square metre, almost 30% lower than the average for the beachfront zone of 120,000 baht per sq m,” the survey stated.

There were about 5,200 condo units on offer in Hua Hin during the survey conducted during the six months through June, said Suwannee Mahanarongchai, deputy managing director, business strategies and asset management at Plus Property.

There was a total supply of 11,700 condominium units and a sales ratio of 76% for the Hua Hin, Cha-am area. The average sales price for all areas within the locality stood at 90,000 baht per sq m.

Over the previous three years, some 1,000 to 2,000 units of new supply have entered the market each year.

More than 50% of the supply is located in Cha-am, where property projects generally had larger spaces to work with than their counterparts in Hua Hin.

Since 2017, a total of four projects have been launched within the beach zone, three were situated inside Hua Hin’s city area and were adjacent to Phetkasem Road. This location meant that commutes could be made easily and residents could conveniently access the beach, malls and hospitals, while prices were also more affordable than the beachfront zone.

One positive factor contributing to sustained interest for condominiums in Hua Hin is that the locality remains one of the most popular holiday sites for visitors from Bangkok. Over the previous five years, the number of Thai and foreign visitors to Hua Hin has risen 6% per year.

Tourist arrivals to Hua Hin are projected to increase thanks to highspeed rail development and airport expansion. As more airlines launch international, direct flights to Hua Hin, this is also expected to contribute to additional foreign tourist arrivals.

Hin is the first phase of the plan,” said Ms Suwannee.

The first phase is included in the government’s medium-term development agenda, with services planned to commence in 2027.

Once in service, train rides to Hua Hin will take less than half the time it now takes to reach the town by car.

As a result, condominiums priced at or below the 3 million baht mark now make up 75% of all the condominium units on offer in Hua Hin. Some 3,900 units stand to gain from the measure.

La Casita, a development project whose starting price was 2.19 million baht, is among the projects that will receive a windfall, said Plus Property.