The Bangkok condominium market during the first half continued to slow, dragged by softer demand from both local and foreign buyers as well as speculative investors, says Knight Frank Thailand. 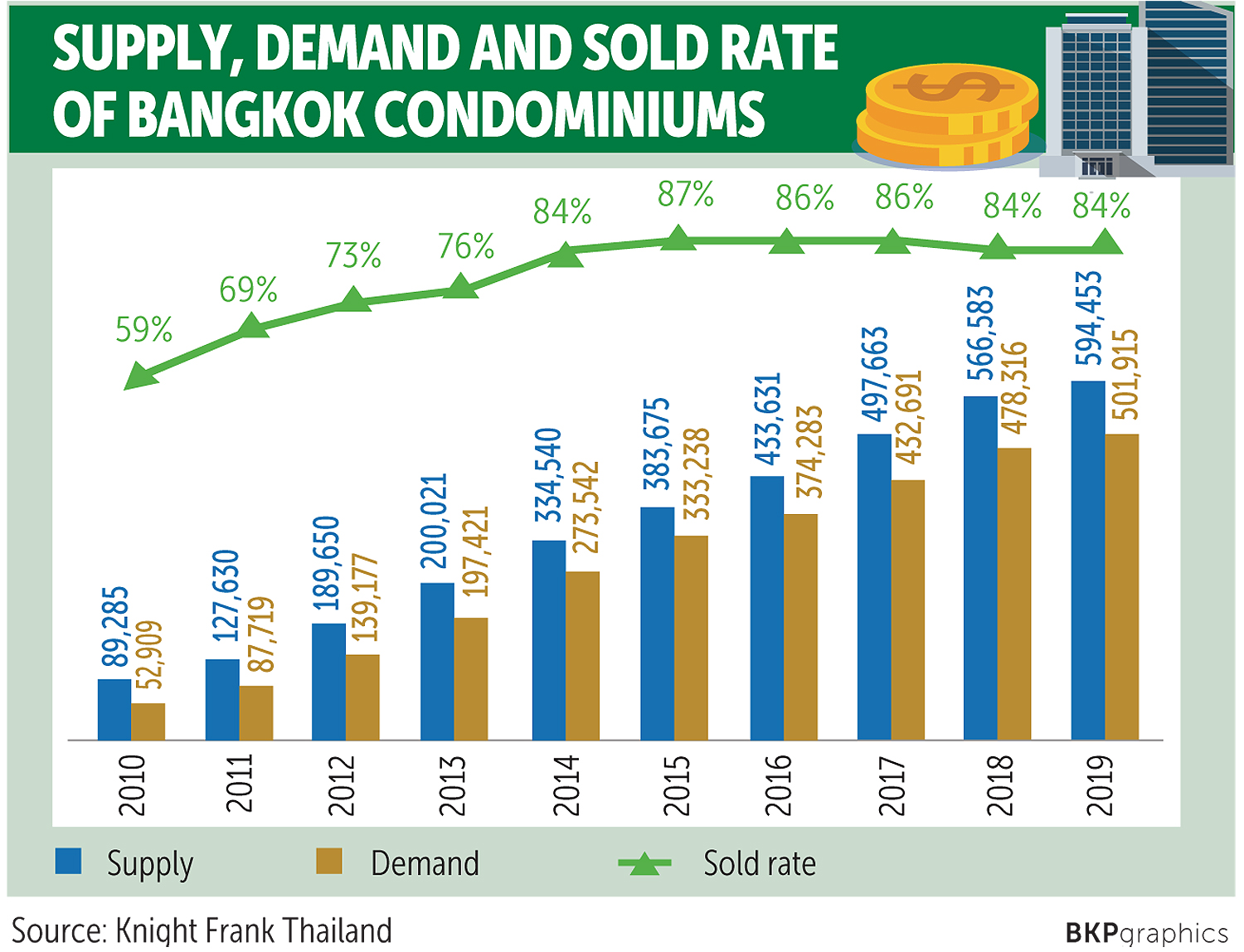 Demand from foreigners is weak because of the rise of the baht against the yuan and US dollar, the unpredictability of the US-China trade row and the global economic slowdown, said Phanom Kanjanatheimthao, managing director of Knight Frank.

Property developers are exercising caution when launching new projects and are adjusting their plans to suit economic conditions. Many listed developers reported a decrease in the value of condominium presales during the first six months, he said.

"We do not expect the sales prices of condos to drop, as we do not see the possibility of a decline in land prices," said Mr Phanom.

The company's research found Bangkok's condo supply during the first half of 2019 amounted to 594,453 units, of which 27,870 units were launched in the first half, down 19% from a year earlier.

New condo launches for the full year are estimated to level off at 50,000 units, down 27% from the previous year. Some 74% of newly launched units are from listed developers. The majority of new launches were still in the peripheral Bangkok area, representing 53% of the first half's new supply, followed by the city fringe and central business district areas, at 32% and 15%, respectively.

The second-quarter sales rate for newly launched condos dropped to 15.7% from 22.6% in the first quarter of 2019, marking an all-time low.

The sales rate for new condos launched in Bangkok during the first half of 2019 fell to historic lows as loan-to-value (LTV) limits, a weak economy and the stronger baht dampened demand.

The normal quarterly sales rate for new condo launches is around 40-50%. Tougher LTV requirements from the Bank of Thailand are starting to have an impact, while baht appreciation against the US dollar and yuan also affected demand from foreign investors, resulting in lower bookings during the second quarter, Mr Phanom said.

Both domestic and overseas demand dropped as a result of the LTV rules and baht appreciation, he said.

The central bank hoped the LTV rules would slow condo speculation in Greater Bangkok, but it also had an impact on real demand in the provinces, Mr Phanom said.

Developers have shifted to launching more low-rise residential projects such as single detached houses, semi-detached houses and townhouses, as condo sales plummeted in the first half. Developers sticking to condo launches will find sales difficult, resulting in a large inventory, he said.

The outlook for Bangkok condos the rest of the year is unclear, said Mr Phanom, driven by real demand, with less buy-to-rent purchasers given low rental yields and the lack of growth in expatriate tenant numbers.