Land prices in Greater Bangkok, gauged by the land price index, rose by 17% in the third quarter, largely driven by the outskirts of Bangkok, after the market saw slowing growth in the second quarter. 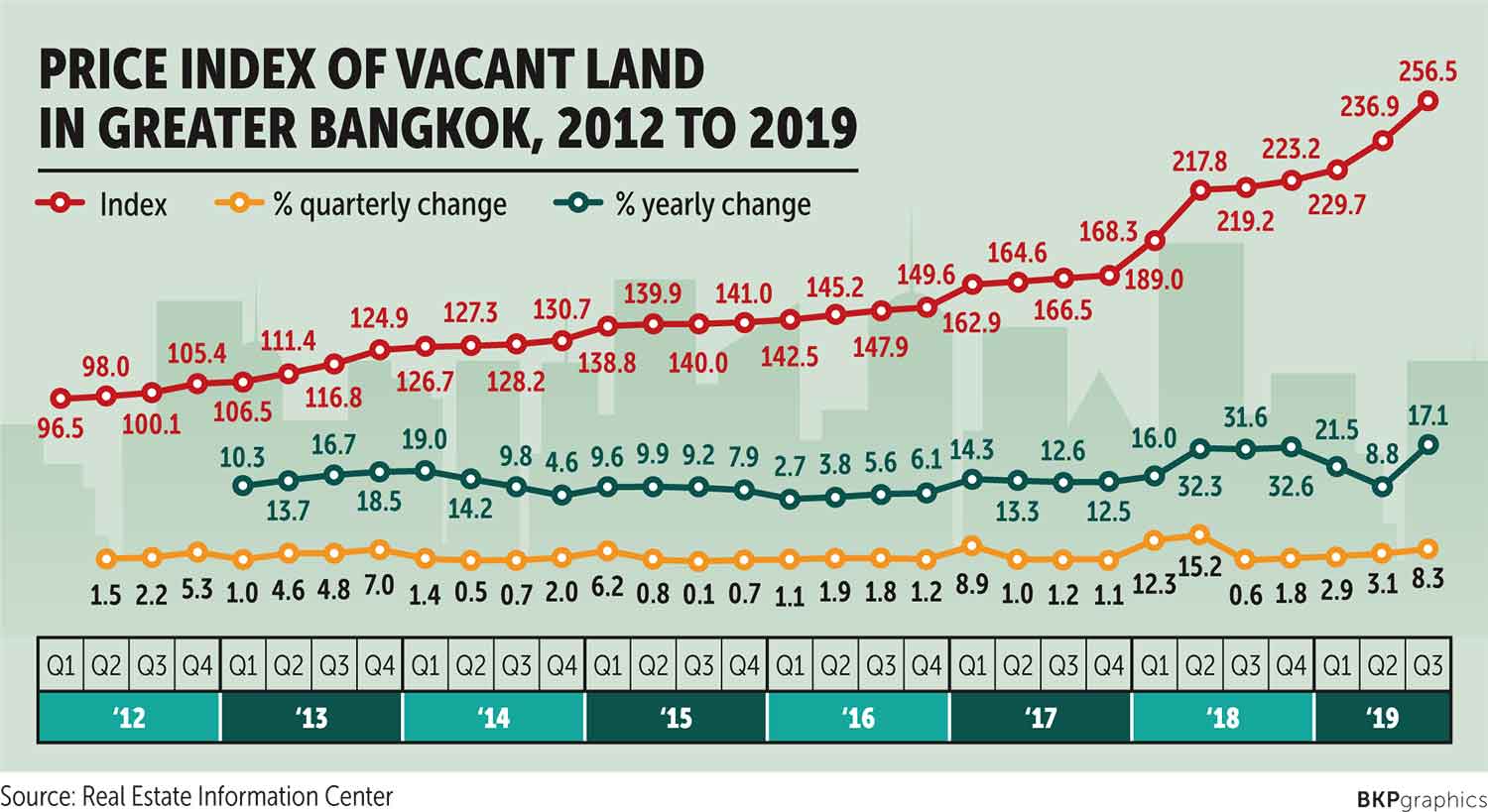 Vichai Viratkapan, acting director-general of the Real Estate Information Center (REIC), said most rises in land prices in the third quarter were found in outskirt locations more than inner-city areas.

"Land in outer-city locations is mainly developed for low-rise houses such as single houses, townhouses and duplexes," he said.

"Developers are moving to the low-rise market as condos sales have been sluggish since the new lending curbs took effect in April."

In some locations, the unsold condo supply was quite large, said Mr Vichai.

According to REIC, the price index of vacant land or land before development in Greater Bangkok in the third quarter was 256.5 points, rising 17% from the same period last year.

On a quarterly basis, it rose 8.3% from the second quarter.

The two areas that had the highest year-on-year increase in land price in the third quarter were Nonthaburi and Pathum Thani. 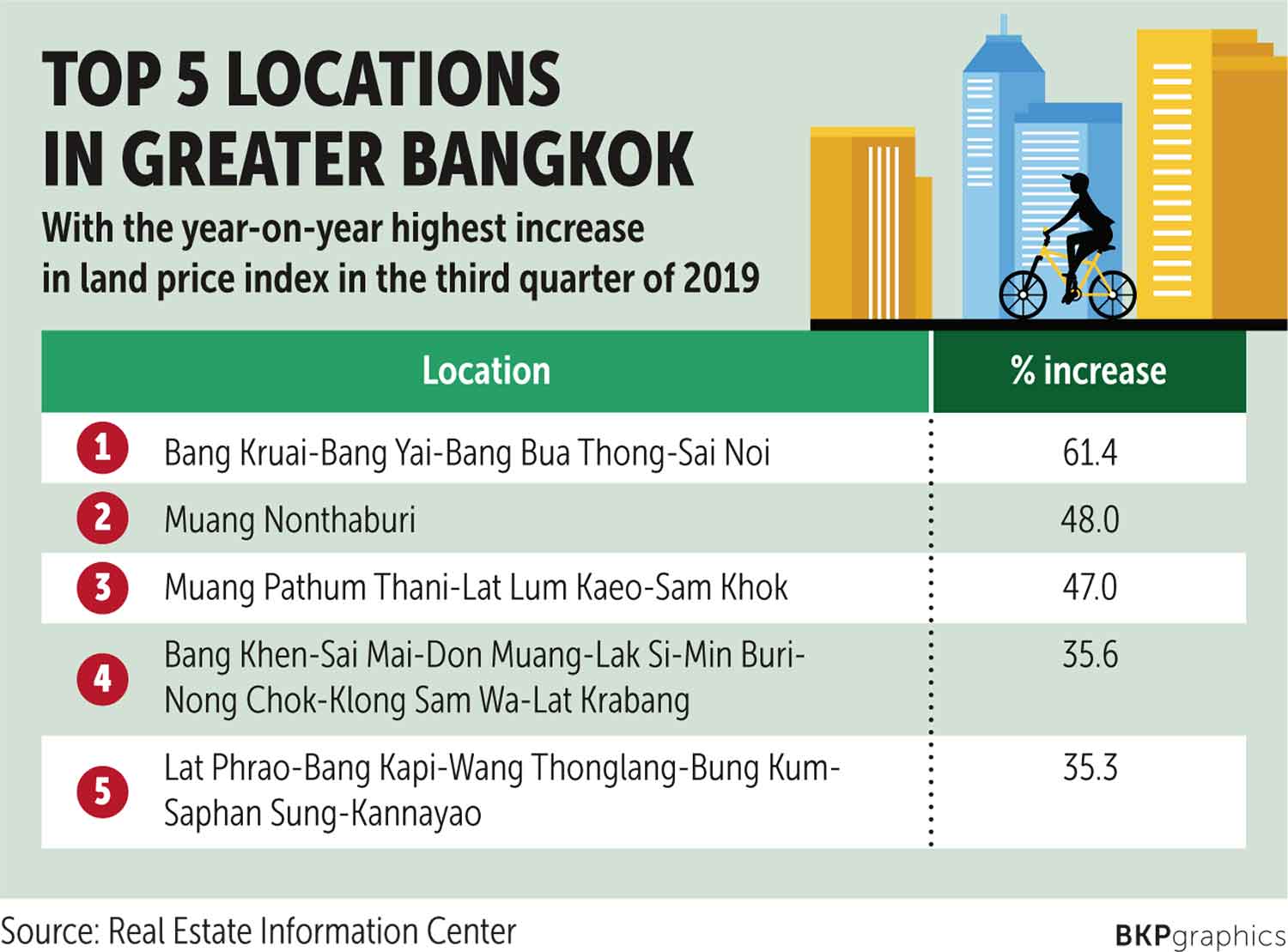 The highest increase in land price in the third quarter was in Bang Kruay, Bang Yai, Bang Bua Thong and Sai Noi districts in Nonthaburi with a rise of 61.4%.

Nonthaburi collectively saw an increase of 48%.

Mr Vichai said these locations saw the highest increase in land prices because of the construction of Highway 81 from Bang Yai to Kanchanaburi, spanning 96 kilometres and to be completed next year, which will improve access to new areas.

A new bridge is planned across the Chao Phraya River from Nonthaburi 1 Road to Kanchanaphisek Road and a new road from Nakhon In to Sala Ya in Nakhon Pathom.

Large increases in land price in the third quarter were also found at locations along future mass transit lines, he said.

Among locations along current and future mass transit lines, the highest year-on-year increase in the third quarter was along an extension of the Green Line from Ku Kot to Lam Luk Ka in Pathum Thani, with a rise of 39.7%. 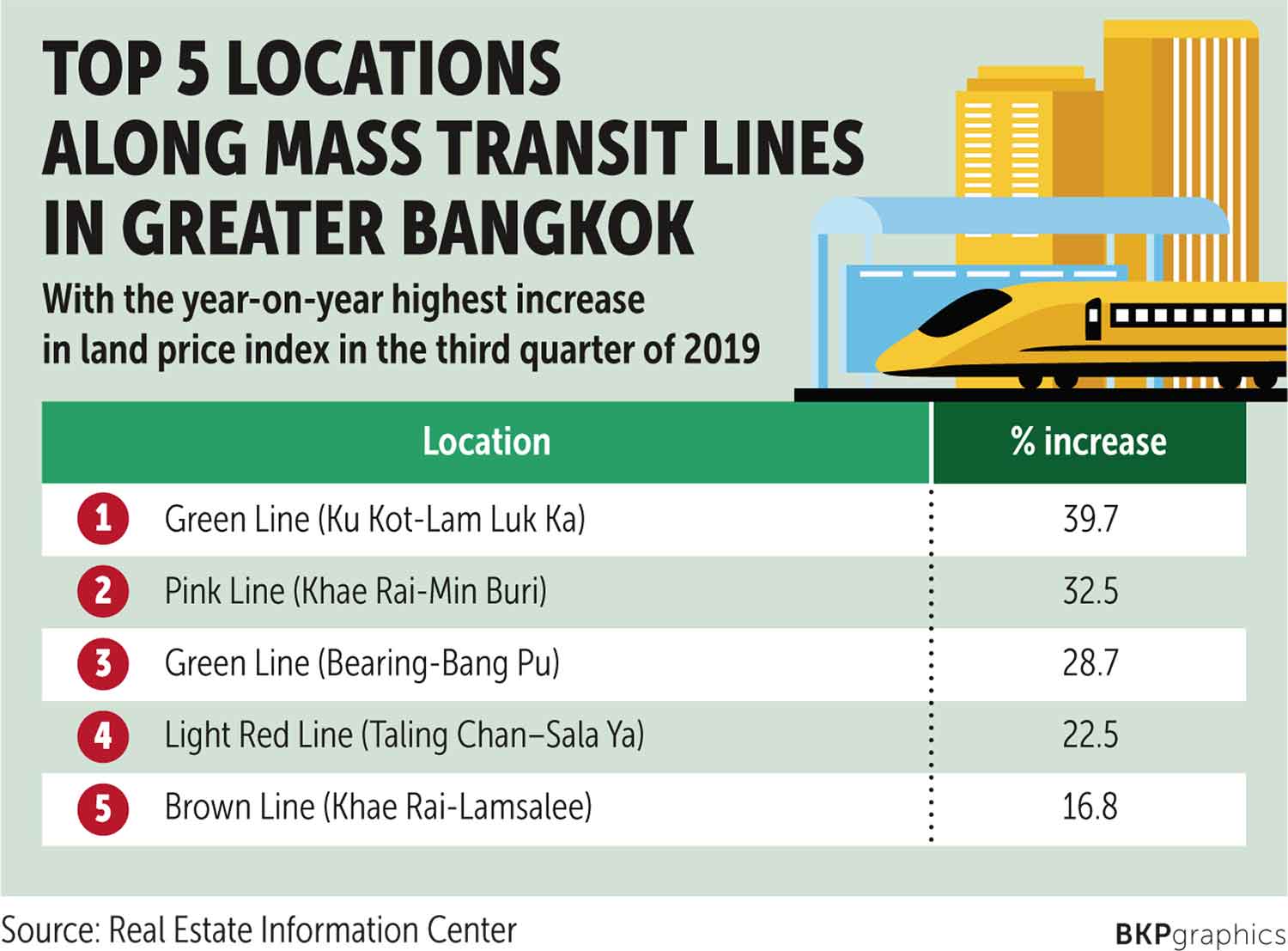 Construction of the Green Line extension from Mo Chit to Ku Kot has not begun, yet the location has ranked among the top five for highest year-on-year land price increases for several consecutive quarters as the extension is scheduled to start by next year, Mr Vichai said.

Another mass transit location with a high year-on-year increase in land price was the Pink Line from Khae Rai to Min Buri, where construction of the mass transit line is 42% complete and scheduled to start operations in 2021.

They comprised the Pink Line, the Yellow Line from Lat Phrao to Samrong and the Orange Line, particularly locations on Rama IX Road, Ramkhamhaeng Road and the Lam Sali area.

During the past six years, locations along the Blue Line's extensions on Charan Sanit Wong and Phetkasem roads saw the largest number of condo supply launched with 37,197 units, accounting for 25.7% of total supply along the current and future mass transit lines.

"Despite a large number of unsold condos in locations along the two extensions of the Blue Line, many developers that bought plots plan to launch new condo projects in these locations," said Mr Phattarachai.